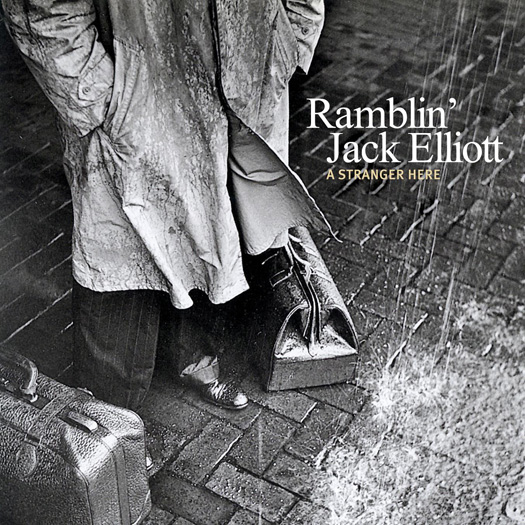 Revered for his interpretive take on traditional American music, on A Stranger Here Elliott steps out of the country/folk arena that has shaped his legend, 50+ years in the making. Haunting and evocative landscapes crafted by Henry construct a mood that is enhanced by Elliott’s world-scarred voice. Together, musician and producer examine a carefully selected number of pre-WWII blues songs in a wholly unique way.

From the liner notes of A Stranger Here, Henry writes: “I pitched the idea that he interpret country blues music from the Depression era of his birth…songs as dark, funny and strange as is he and the times that produced them, and also ones that still resonate in these turbulent days: songs from the blues masters Jack had known during their latter-day resurgence — and his own ascension — in the early sixties (Son House, Mississippi John Hurt, Rev. Gary Davis); songs that share shape and subject with many folk songs of the same period but speak with a particular poetry to struggle, love, justice and mortality — off-handedly and all at once…I needn’t have pitched so hard. Jack seemed intrigued by the notion from the start, and had no trouble reading the songs as pertinent to him. He pounced on each one as it came up during the four days of recording in my basement studio, gave each a face of suave cunning, and was as unexpectedly arch as Bob Hope might’ve seemed strolling through a Fellini tableau. He’s using an old language but always speaking in the present tense.”

One of the great American musical treasures, Elliott has had a rich and storied life. As a budding musician, Jack developed his voice under the tutelage of Woodrow Wilson Guthrie, truck hitching across the country off and on for a couple of years with Woody, carrying “only razors and guitars.” The pair eventually landed in the McCarthy-free enclave of Topanga Canyon CA in the 1950s, where Elliott played for James Dean and later married Dean’s former flame. On the other coast, Elliott was also a fixture of the Greenwich Village scene, and once spent “three days and a lot of wine” listening to Jack Kerouac read On the Road. But it is his relationship with a young Bob Dylan that Elliott is perhaps most famous for, though back in the 1960s the up-and-coming Dylan was often mistakenly dubbed the “son of Jack Elliott.” Today Elliott simply states “Dylan learned from me the same way I learned from Woody.”

A Stranger Here promises to be another wonderful tome in the library of Ramblin Jack Elliott, one of the great American storytellers.