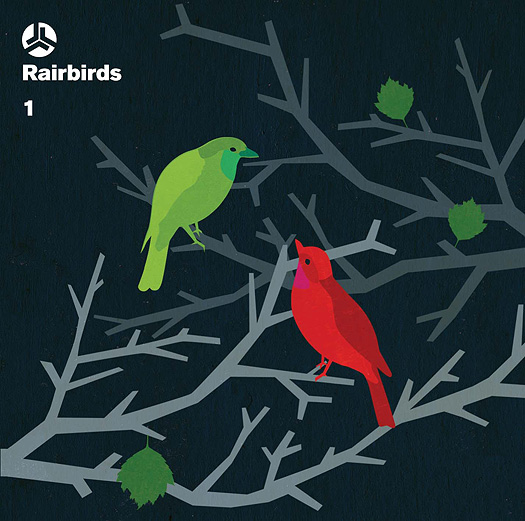 In 2000, a near-finished mix of the Rairbirds track “Blow Wind Blow” made it into the hands of one Rupert Parkes – better known as the drum’ n ‘bass legendPhotek – who was so enamoured with the record’s driving technic rush that he temporarily put his burgeoning career as Hollywood film scorer on hold, and embarked on a spot of electronic remoulding. Released on the Rairbirds’ own fledgling R-AIR imprint in 2001, the record found fans at Radio 1 in the shape ofPete Tong, Mary-Anne Hobbes and Jo Whiley; and scooped Single Of The Week on Xfm’s X-Posure.

From here the band have risen as pioneers of the organic dance scene. With a sound created without samples but through the use of live instrumentation, orchestral themes and vocals, the band are in complete control of their aural output. Rairbirds have kept a low-profile, in recent years, spending what time they have together working on and improving new material. After a limited EP release “Electric”, they are now ready to unleash their full-length.

“Rairbirds1” is an eclectic mix of dance, electronica and full-band funk-jams. Diversity is the key to a schizophrenic sequencing that helps mould an album that never tires, and never dares to lose momentum. As band member Jamie Crowe states, “Composition is the key to this record, DJ’s put tunes side by side but they don’t compose them to go together. A theme is established as the album begins and develops as the album progresses, and like any journey the surroundings change and affect the traveller. This is what the theme represents: the change in perception of that traveller.”

Taking influences from the club scene, jazz greats such as Miles Davis, and the skewed pop and thematic sequencing of The Beatles’ “Abbey Road”, the overall impression is that of a band that want to make dance music vital again.

With their debut album Rairbirds have created an electronic record that will sound as good on wax as it will in the live arena. With crossover appeal in abundance and memorable highlights in “Blow Wind Blow” and “My Only Love”, it looks like all of their time and effort is about to pay off.