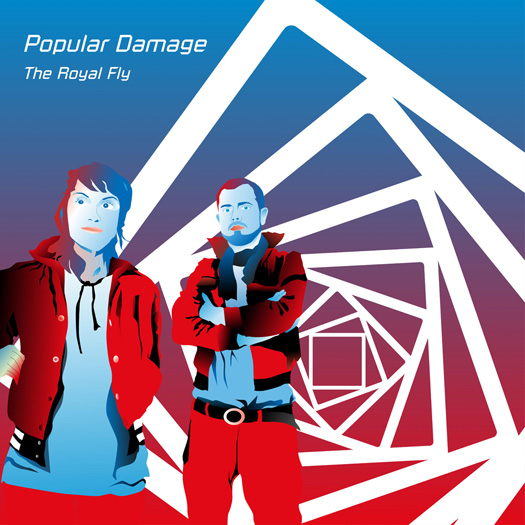 Dance + Electro + Pop = Popular Damage. Thus was the simple algebra behind the 2007 genesis of the collaborative project between Manchester-born Nadine Raihani and Stephan Hengst. Berlin’s post-rock and indie scene was the common denominator which brought these two forces together in their quest perfect the formula for dance-worthy pop music.

This quest began with their cracking EP “Top Hits of the USA” written and produced by Nadine in her studio and released in summer 2008 on a net label. Within no time at all, the punchy track “Everybody Got Young” stormed indie radio playlists and grabbed the attention of blogs everywhere. In November of the same year, they put out two unfaithful cover versions of tracks by Tegan and Sara and Digitalism (Popular Damage Assimilations) on their Myspace page, which triggered an incredible hype: the songs popped up all over Berlin radio, getting airplay without even having been released. The icing on the cake came in the form of a big “thumbs up” from Digitalism themselves (“…it’s fantastically different and really unique”), who hand-picked the track as one of the winning remixes for their feature Myspace competition, which drew over 1000 entries.
Popular Damage’s is a real child of the noughties: the internet is the key medium behind the project, and free track give-aways on Myspace have played an instrumental role in spreading Popular Damage’s infectious dance-electro-pop inventions amid their loyal following and beyond (www.myspace.com/populardamage). The band has been inundated with remix requests and support slot requests: they have already completed remixes for Miss Platnum & Zoot Woman and already toured with The Rakes, Dúné and The Whip to name but a few. On the basis of this they were subsequently invited to showcase at SXSW 2009 in Austin, Texas. Other fantastic shows played so far include Berlin Fashion Week, the “Intro” tour, as well as a breathtaking show for the World Athletic Championships in front of the beautiful backdrop of the Brandenburg Gate. They have been added to the Sony Ericsson Berlin Fashion Week Download Special and are also included on the Motor FM compilation. Their shows are energy-filled, saw-toothed and a pleasure to behold; both rock and electronic arrangements are incorporated into the live sets and instruments are relentlessly swapped mid-song (including guitars, bass, synths, samplers, laptops and live drums), and are unfailingly met with resounding positivity. Indeed, the US shows were very warmly received, yielding descriptions of Popular Damage as « A poppier version of the Yeah Yeah Yeahs crossed with Daftpunk! ».
The basic maths of last year has been surpassed: Popular Damage has progressed into the realms of staggering physics and chemistry. The result? Explosive sparks and jagged musical detonations which will blow you out of the water. Popular Damage’s latest EP “The Royal Fly”, out as of November 2009, well and truly raises the bar, featuring a new and re-recorded version of “Everybody Got Young” and remixes of “Everybody Got Young” by Double Dragon & Fukkk Offf, as well as the tracks “Exclusive” and “Easy Money” (with a remix by Beatshaker & Blender). This, beyond all doubt, is an equation which works.

« ..a poppier version of the Yeah Yeah Yeahs crossed with Daftpunk! » – SXSW

“It’s all still stuff you can shake a leg to, like EMF. And so Popular Damage manages to breach the chasm between brightly-coloured electro-punk and the huge pop classics once more. Finally!” – Intro

“Popular Damage’s ‘Top Hits’ do exactly what they say on the tin: pop and dancefloor all in one. They are weighty and yet delicate, adorable yet confident, and most importantly, 150% palatable for the international market.”- Motor.de

« …they ease our pulse and fear, proving not being no one-hit-no-hear-never-again-wonder. We just don’t know how they do it, but the loops, drums and vocals make our feet dither to midnight. » – thefastlife.org