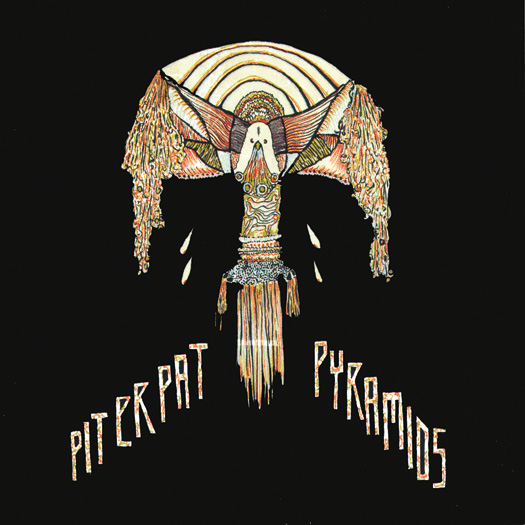 Pit er Pat is the Chicago-based trio of keyboardist Fay Davis-Jeffers, drummer Butchy Fuego and bassist Rob Doran. When approaching a title for the new album, the follow up to 2005’s Shakey, each member of Pit er Pat remembers coming across pyramids in various forms: in random images they encountered, in the course of personal reading, and even in their own drawings. Pyramids were everywhere it seemed, and the strength and symbolism of that shape clicked for the band with the themes of the new album and their nature as a three-piece.

Time doesn’t care / makes no decisions / they have already been made. / It just moves round the circle / as it always has and always will. / Reminding you in it’s stableness / of your own temporality/ your brief life / your dying/ the world didn’t notice you lived at all. While that kind of seemingly ominous imagery is repeated on Pyramids, there is also an equally heavy presence of openness and possibility uniting the dualities that this band has come to represent.

Pit er Pat toured extensively through most of 2005 and made their first full circuits of the US and Europe, including tours with Sam Prekop, Menomena and Need New Body. Playing more than 110 shows together made them better as a band and synthesized the sonic evolution that Pyramids represents. But rather than going into the studio with a list of finished songs to put on tape, Pit er Pat instead carried with them the creative momentum that those tours had fueled, recording the music as it came together organically, capturing the sounds at their most fresh.

As with their last release, the 3-D Message EP, Pit er Pat recorded this album at Soma Studios with John McEntire. Pyramids was recorded and mixed in just 11 days – enough time for the band to fully develop their inspirations, while keeping things performative energetically and capturing the details often lost in the club PA. It’s clear that McEntire was very much in-tune with their musical ideas, reflecting the bands’ creativity back on itself in order to aid the full and fluid realization of their ideas.

Pyramids is Pit er Pat’s second full album and sixth release overall. Utterly unique and difficult to pin down with musical comparisons, it’s by far the band’s most comprehensive effort to date.