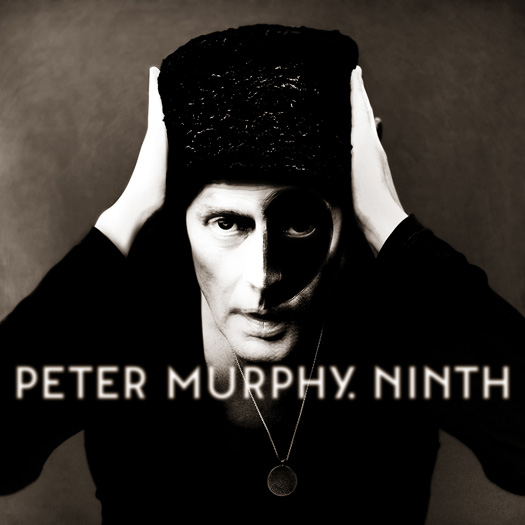 In his four decades of service in the post-punk culture wars, PETER MURPHYhas confounded fans, critics, even himself. As the mainman of the acclaimed outfit Bauhaus, he helped usher in ground breaking opaque moods and atmospheres into the post-punk landscape. When the band broke up for the first time in 1983, the singer set off on a solo career that found him challenging his audiences in numerous ways. When the music press tried to tag him as “the new David Bowie,” he’d close his shows with a vamping of the Thin White Duke’s disco classic “Stay,” only to switch into a cover of Bauhaus’ funky punch-up “Kick In The Eye,” followed by a cover of Pere Ubu’s “Final Solution,” which ended with a burly roadie physically picking up the singer and putting him in an airplane spin. When fans and critics tried to paint him exclusively as “the King of the Goths,” his response was to encore with Prince’s venerable “Purple Rain.” When the singer began to explore more melodic concerns to distance himself from the gothic-rock culture he helped create, he accessed both new audiences and successful records.

“People remember those things,” the singer says, laughing at memories of his onstage audacity. “They don’t remember some digital file they downloaded from the Internet that gets lost among the other 3,000 ones they already have.”

It’s doubtful Peter Murphy will be assigned a similar fate. He’s aligned himself with Nettwerk Records to release NINTH, his first solo album in seven years and the first since the permanent dissolution of Bauhaus in 2009. Produced by David Baron, Ninth is a culmination of where the singer has been and where he is now, all imbued with a confidence that has been Murphy’s stock in trade.

While countless performers and industry types bemoan the demeaning of music in current download culture, Murphy’s only concern is continuing to connect with his audience with unparalleled honesty.

“I think younger audiences are just as aware that they don’t have any identity in the music they follow,” he says, commenting from a place of aesthetic analysis than any kind of bitterness. “Once they start listening to older music or music that isn’t generically issued, they start to hold onto things more. That’s why it’s more important for people like myself to connect with an audience. I’m not talking about Facebook—I’m talking about a live show. People can really start to form a congealed idea in their relationship with an artist. That kind of connection is missing in the digital world: You experience things more in a tangible realm than in a virtual existence. I don’t deny or get anxious about being labeled; I can’t really describe what I do, but it does have an outside effect on an audience. But I mustn’t get stuck holding onto that, because you mustn’t rest on your laurels.”

Murphy is hardly the poster child for artistic inertia. His 2004 solo album,Unshattered, was doomed not by any artistic shortcomings, but by the Artful label closing its doors just as the record was coming out. The following year, he once again teamed up with his colleagues in Bauhaus for a co-headlining tour with Nine Inch Nails, when it was decided that they would reconvene in a recording studio to create new music. After a tumultuous 18 days in an Ojai, California studio in 2006, the band came out with Go Away White, a record displaying both the personal chemistry, as well as the incendiary aspects of the group dynamic.

“It was typically Bauhaus,” says Murphy, who actively embraced the high tensions within the band. “The tension [on that album] is palpable, isn’t it? I loved it. People hear about that record retrospectively. Danny [Ash, Bauhaus guitarist] would say, ‘We couldn’t stand to be in the same room together.’ But that’s not my experience. I was always the biggest advocate for that band. We were warming up when it ended. I was still raring to go to complete that album. I was putting my solo career on hold to advocate for Bauhaus. We split up, I reworked my life—I’m Peter Murphy in or out of Bauhaus, so it’s not too difficult. I’ve got a band of my own, but I didn’t have an idea where it’s going to go.”

Unbeknownst to him, Murphy’s career arc would take a different turn. In 2005, he met singer/songwriter Sarah Fimm, the support act for his tour that year. He did some recording with the electronics-based artist in upstate New York, with the sessions being helmed by producer David Baron. In Baron, Murphy found not only a kindred spirit, but also a person with great jurisprudence with regards to modern technology and how it should be considered within an artist’s work. “I call David an errant genius,” Murphy says about his collaborator. “He’s like my brother: very perceptive, very musical. So musical you can’t quantify it. He allowed the music and the ideas to speak for themselves.” Considering the breadth of his career, conventional wisdom would question why Murphy would need a producer to see his vision through in the first place. But the singer is in service to his songs—not his ego. “I don’t want to be hands-on,” he says. “It’s distracting for me. I’m hands-on in terms of exchanges, discussions and various takes. David is superior in that he is super-musical and totally respects the artist. He doesn’t fall for overproduction. He is only concerned with the songs’ needs.”

Probably the most apparent characteristic of Ninth is the level of intimacy Baron and engineer John Siket captured. The proceedings carry the feeling of a tight, seasoned band—in this case, guitarists Mark Gemini Thwaite and John Andrews, bassist Jeff Schartoff and drummer Nick Lucero—facing each other in a small studio, playing together. There’s a sophisticated energy and psychic urgency to tracks like “Seesaw Sway,” “Slowdown” and “Memory Go.” Equally exciting are moments like “Velocity Bird,” where Murphy gets his swagger on in the same wild kingdom where Iggy Pop’s “streetwalking cheetah” prowled; the rocking “Peace To Each,” where the singer ramps up his sinister quotient a few notches; the slow grooving head-nodder “Uneven & Brittle,” and the brooding, atmospheric noir of “Secret Silk Society.”

On the convex, Ninth also features moments of warm poignancy, like the lover-comforting “Never Fall Out” and the melancholy closing track, “Crème de la Crème.”

But it’s the album’s first single, “I Spit Roses,” that reconciles Murphy’s melodic sophistication with his resignation toward the fate of Bauhaus. Teeming with nautical metaphors of a ship’s crew (i.e., the other three members of Bauhaus) and a dip into Lewis Carroll territory (“Shick-shack, left you in shock/shed poison with a lover’s lock”), the song was inspired after Murphy spent a long day in the studio during the making of Go Away White. As the other members were working on an arrangement, Murphy went home, having put in a full session. He suspected that his decision would cause more schism when he returned to the studio the next day. “When I went in the next day, I knew there was going to be some kind of confrontation about my leaving the previous night,” Murphy recalls. “I was sitting near a rose garden, talking on the phone to a friend of mine about the situation. She told me not to worry, to take a rose there as a friendly gesture. Instead, I took three or four and put them in my mouth.

“As I walked in, David [J], Kevin [Haskins] and Danny were in conference about the band,” he continues. “I thought, ‘Oh dear, here we go…’ The moment anyone speaks to me, my response is to spit roses in their face—and that’s what happened. Daniel said, ‘Peter we need to talk about…’ Pwah! ‘That’s my answer.’ It caused them to think, ‘Look at him, he’s crazy!’ And I responded, ‘Look, it’s roses, don’t you get it? C’mon, let’s just work.’”

Dealing with short-fused tempers (and botanical snacks) are part of his artist mythology, but it cannot be denied that much of Murphy’s artistic visions have been original and seminal. Fortunately, he’s not interested in trading on his significant accomplishments. While Ninth marks another chapter in his artistic (and thereby personal) evolution, the album exists on a plane of its own. Ninthisn’t a “reinvention,” “return to form,” or any of the buzzword nomenclature used to herald an album’s release date. For three decades, Peter Murphy introduced new ways of thinking in the rubric of rock music. He’ll be the first to tell you the work is its own reward and that it’s acceptable if the world at large still hasn’t caught up with him. Well, maybe…

“Although people tell me I’m famous, I don’t feel like it,” he resigns. “Right now, it’s quite nice: I feel like I’m 24 with this record and I think a lot of people are going to get to know my music. I have a very hardcore audience who’ve been with me for a long time, but I do have a great urge to broaden it.”

He stops to laugh. “I’d like to play theaters; I’m more able to be lowered from the rafters on a chain than in a club!”