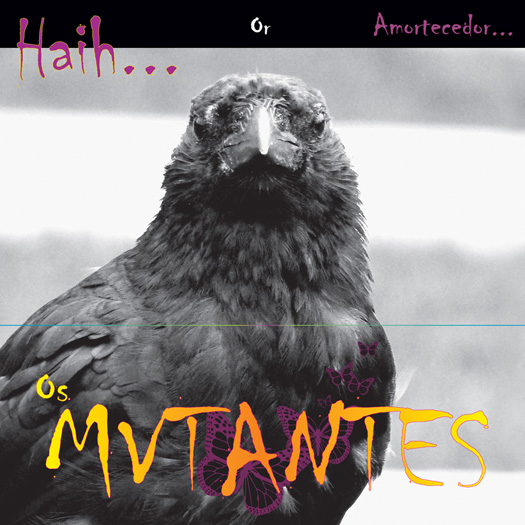 When the members of the legendary “Tropicália” band Os Mutantes took the stage before an audience of thousands at the Hollywood bowl a few years back, it seemed one of the greatest secrets in modern music was finally out. The seminal band whose ethereal absurdist pop music had inspired so many prominent musicians since their breakup decades before, were back. This time the world seemed ready. Now this influential band has reemerged with a brand new much anticipated album entitled Haih or Amortecedor on Anti-records.

Those who have not heard the music of Os Mutantes have undoubtedly experienced their influence. During the band’s absence, their records have been passed from musician to musician like cherished gifts, ever inspiring and altering the contemporary musical landscape. Kurt Cobain of Nirvana was tipped to the band by members of the band Red Kross. When Nirvana toured Brazil in 1993, Cobain tried desperately to arrange a meeting with Mutante bassist and singer Arnaldo Baptista. Unable to locate the musician he sent him the following note. “Arnaldo, best wishes to you, and be careful with the system. They swallow you up and spit you out like a maraschino cherry pit.”

The Mutantes’ cut-and-paste, sonic collage approach and their tendency for cultural irony, is an aesthetic now prevalent in modern music. The band has received praise from a growing list of luminaries including the Flaming Lips, David Byrne, Devendra Banhart and Of Montreal. But of any contemporary musician, it is Beck who appears their direct heir. For his part, Beck readily admits a longstanding admiration for the Mutantes, even dedicating his song “Tropicália” from the album Mutations to the band. As he explains,  »Hearing Os Mutantes for the first time was one of those revelatory moments you live for as a musician. When you find something that you have been wanting to hear for years but never thought existed. I made records like ‘Odelay’ because there was a certain sound and sensibility that I wanted to achieve, and it was eerie to find that they had already done it 30 years ago, in a totally shocking but beautiful and satisfying way. For years it was pretty much the only thing I listened to.”

This admiration by fellow artists is something Mutante founder and singer/guitarist, Sérgio Dias, appreciates. “I think it is really beautiful how our sound caught on with newer generations through the songs of Beck and others,” he explains. These kids were influenced by our music and started to talk to other kids and tell them. And then Beck made Mutations and he was so eloquent about that. I think it is a wonderful portrait of how things happen today.”

Mutantes’ unique otherworldly sound was forged in a time and place of turmoil. San Paulo Brazil of the early sixties was a city and nation under siege. The military had seized power and the authorities were coming down hard on anything resembling descent. It was amidst this precarious backdrop that, in 1964, two teenagers, Arnaldo Baptista and Rita Lee Jones met at a high school band contest. Inspired by a Revolver era Beatles, the two soon drafted Arnaldo’s brother Sergio and formed what would become Os Mutantes.

Soon the band, along with other forward-looking musicians, writers and artists, were taking part in lively discussions that would eventually evolve into a culturally defining movement. With elements of political criticism, prankster humor and an eclectic range of musical styles, Tropicália was born. “In Brazil we were influenced by things like the Beatles and Picasso,” Dias explains. “But we didn’t know what the Beatles were singing about and we didn’t know the history of Picasso. We were in the middle of a very bad situation and we were responding to all of this. We only had bits and pieces of everything and so we formed this image of what rock and roll was supposed to be. Our music is like a patchwork quilt made up of all these different pieces from different places. We put all these elements together and just let them cook in this witches brew and that became our sound.”
It was during Tropicália’s start that the Mutantes recorded their self-titled debut album. As students battled the police and military, the Mutantes recorded an ambitious album merging seductive Brazilian music with the new psychedelic pop of the Beatles and Beach Boys. The end result didn’t so much take a direct political stand as offer a complete aesthetic rejection of the harsh reality surrounding them.

The ruling generals soon regarded the Mutantes as musical emissaries of an emerging counter culture steeped in sex, drugs and rock ’n’ roll, and the group’s performances began to get raided. The Mutantes, for their part, seemed to delight in their role as cultural provocateurs: with Dias performing in a Napoleonic military uniform, his brother Baptista in a priest’s cassock and singer Rita Lee appearing in a bridal gown. “Many people were being arrested by the government at that time,” Dias explains. “So we fought back the only way that we knew. They would try to censor our lyrics. But instead of changing the words we would put all sorts of strange noises on top of them. I don’t think they knew how much we were making fun of them.”

By 1969, when the band’s third album “A Divina Comédia ou Ando Meio Desiglado” was recorded, Brazil’s political situation had only further deteriorated. A governmental edict called as AI 5 (Institutional Act 5) resulted in the persecution of intellectuals, artists and activists, the closing of the congress and countless arrests. The crack down was the beginning of the end for the Tropicália movement. Giberto Gil and Caetano Veloso, close friends of the Mutantes and two of the leading forces of Tropicalia, were arrested and exiled. Despite this the Mutantes had their biggest hit with the song “Ando Meio Desiglado”. Propelled by a rocking Motown inspired bass line, the lyrics offered a forthright description of the effects of marijuana. On another song “Desculpe, Babe,” Sérgio’s voice was distorted through a rubber hose connected to a hot chocolate can with a tiny speaker inside, as he sung over melodic Beatlesque guitars.

While performing in Paris, the band recorded an album for Polydor UK. The record was intended to introduce the band to a broader western audience and featured many of their previously recorded songs sung in English. The masters from the session were subsequently lost and the album, “Technicolor,” wouldn’t resurface for nearly three decades. Singer Rita Lee soon left the band to pursue a solo career and eventually it was only leader Sérgio Dias, leading the band until they finally disbanded in 1978.

But in the band’s absence, Mutantes’ standing amongst the rock cognoscente only intensified. In 2000, the lost 1971 album “Technicolor” was located and released to a near euphoric critical response. In 2006 the band finally reunited and performed at London’s Barbican Arts Center. This was followed by triumphant shows throughout North America and the Mutantes being awarded the Brazilian equivalent of a Grammy for best band. “Playing live with this band is so amazing,” Dias says. “I can not describe anything better than maybe going into space. When we were playing at the Pitchfork Festival it was like looking at yourself when you were a kid trying to mumble the words to “I Wanna Hold Your Hand” in English and not understanding the words. There were hardly any Brazilians there but the kids were all singing our songs in Portuguese. It was really beautiful.”

So this acclaimed band who inspired so much now prepares to release Haih or Amortecedor, their first new album in over three decades. On it Sergio Dias has collaborated with two of the founders of Tropicalia, renowned songwriter and multi instrumentalist Tom Ze and Jorge Ben who wrote the band’s first hit Minha Menina. But don’t expect anything like nostalgia from Haih or Amortecedor. The end result is a record that brilliantly updates the band’s legendary “Tropicalia” sound, propelling it out of the sixties and into an uncharted but undeniably exotic future. As expected, the songs utilize a startling assortment of instrumentation, from austere violins to distorted metallic guitars and something called a crazy flute, lending an underlying theatrical power to their genre defying music. The song Bagdad Blues, with its tinkering old piano and seductive horns, conjures an otherworldly cabaret while Querida Querida is modern rock music unlike anything you’ve heard before.“It would be awful to mimic something we had done when we were teenagers,” Dias explains. “When we were making this album we were absolutely vigilant that the ideas were entirely fresh and I think we did a very good job. Everyone who has heard this album say it doesn’t sound like Mutantes – but then it is also pure Mutantes. I really think it is a perfect vision of what Os Mutantes should sound like in the 21st century.”

One Day As A Lion