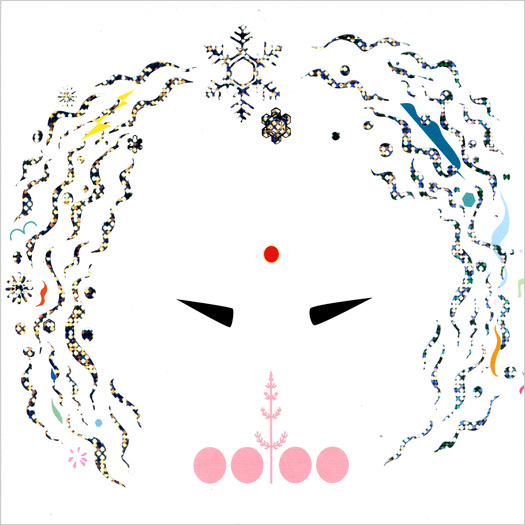 Communication with nature is not a new theme for OOIOO. Visually, previous album art deisgns and band photos bare hidden repetitions of “o-o-i-o-o” and videos have visually featured woods of the forest above any member of the band. Much of the band’s past music has incorporated tribal rhythms and wild sounds, but an even more prominent focus on nature is clearly stated on the new album,TAIGA right from the title, which means “big river” in Japanese and “forest” in Russian.

OOIOO’s earliest music was minimal and digital, just as their binary name may suggest. But as the band’s lineup evolved over four previous albums, so did its sound. New-wave poppy grooves gave way to chaotic plateaus and psychedelic freakouts on albums like Kila Kila Kila and Gold & Green. OOIOO’s current manifestation has derived a rhythm-based soundscape, spacious, spiritual and elevatory, intended as communication with the Earth and motivated by nature.

TAIGA’s instrumental sounds are plentiful, although less varied than on Gold & Green and are generally more focused on accentuating the rhythm than building a melody. To a similar effect, Yoshimi and her band-mates’ vocals range from tribal and meditative chants to bird calls and free-folk screaming. TAIGA sounds like listening to the deep forest from the bank of a big river, to sounds of animals and trees, life and death. This is a call to nature as only Yoshimi could muster. The album is about the now and the future, where stories exude the depth of nature and begin and end in the taiga.

Yoshimi P-we, founder, leader, and songwriter of OOIOO, began her music career in 1986 playing drums in UFO or Die with Eye and joining him in revolutionary noise-pop experimentalists Boredoms. She became the drummer in Kim Gordon’s Free Kitten and later released three solo 7″ singles on Thurston Moore’s Ecstatic Peace label.  She formed OOIOO as a fictitious band for a 1996 magazine article, but they quickly gained attention as a real band opening for Sonic Youth in 1997 with powerfully and positively energetic and positive live shows (that have been known to feature florescent body paint)

Kill Rock Stars released the band’s debut in the US in 1998, followed the 2001 Birdman release of Feather Float. In early 2003, Mike Patton’s Ipecac records released Flower With No Color, the debut from Yoshimi’s collaboration with Yuka Honda (Cibo Matto).  Yoshimi experienced another bout of random celebrity when she was made the « theme » of the Flaming Lips’ Yoshimi Battles the Pink Robots. Thrill Jockey released Kila Kila Kila, the band’s first for the label, in 2004, followed by release of the 2002’s Gold and Green was released in the US by Thrill Jockey in 2005. TAIGA is OOIOO’s 5th album, and Yoshimi is joined this time  by Ai, Aya and Kayan. The band will tour the US in early 2007.