« THE CROSS OF MY CALLING » 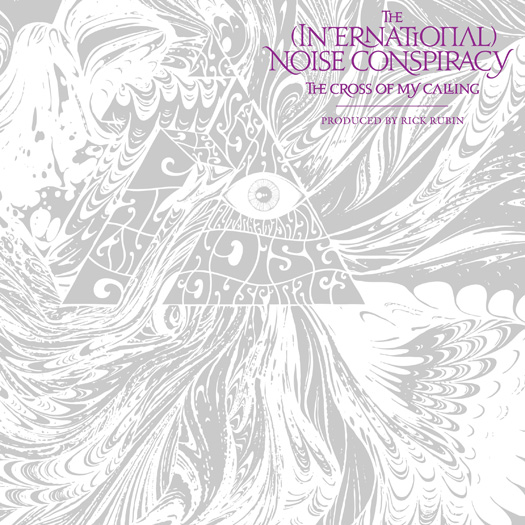 Spearheaded by Rick Rubin and created in the same Sunset Sound studio where The Doors recorded most of their acclaimed catalog, The (International) Noise Conspiracy’s fourth full-length is a bunker-buster of compassion and activism aimed straight for your heart and brain. Set to explode during one of the most critical political periods in postmodern history, The Cross of My Calling is the sound of a global society steps away from apocalypse. Whether it’s the epic title track, the anti-moralism of « Child of God, » the neocon smackdown of « Black September, » the compromised ideals of « Dustbins of History » or the call-to-arms against overconsumption found in « Washington Bullets » and « Storm the Gates of Beverly Hills, » the band’s latest effort is packed with warning, and amplified by passion.

« Rick likes the fact that we are very political, » explains vocalist Dennis Lyxzén, « especially in times like these. Labels want you to tone down the politics, but Rick recognizes that it’s what makes us stand out. But we also recognize the industry is on shaky ground because of that, which is why it’s so cool to have someone like Rick believe in you. »

After his former band – the seminal hardcore act Refused – broke up, Lyxzén founded The (International) Noise Conspiracy and the group has delivered unrestrained critiques of capitalism, soundtracking our slide into terror, hyperreality and narcotized apathy since 1998. Featuring ferocious songs sequenced from the genes of rock, jazz, art, punk and protest, Survival Sickness, A New Morning, Changing Weather and the Rubin-helmed Armed Love have mashed revolutionary theory and kinetic sonics into a hybrid solution as intelligent as it is danceable.

« We’ve worked hard for a long time, but it’s a tough world to get by in. Anything that doesn’t fit the mold scares the music industry, » elaborates Lyxzén. « We know how this world works; that’s just the way it is. »

Rubin’s ear managed to bring out the best in The (I)NC’s latest batch of songs, which broadly cover challenging territory. The urgent noise of opener « Assassination of Myself » is « ultimately about the deconstruction of the male identity, about being told what it is to be a man, » Lyxzén says. That self-actuation forms a thematic center for The Cross of My Calling.

Lyxzén, guitarist Lars Strömberg, bassist Inge Johansson and drummer Ludwig Dahlberg ignite on the breakneck « Arm Yourself.” « We all sit here and talk about revolution, » Lyxzén says, « but how far are we ready to go, to transform it into something real? »

Meanwhile, the soulful stomp of « Boredom of Safety » takes the convenience and comfort of success apart, with the help of backing vocals from The BellRays’ powerhouse Lisa Kekaula, who also shows up on the hard-charging atheist anthem « I Am the Dynamite. »

Of course, given the setting, it makes sense that the ghost of The Doors also makes an appearance. The brooding, cathartic organ solo on « Child of God » is a faithful iteration of the same organ solo found on The Doors’ chilled epic « Riders on the Storm. » Lyxzén’s poignant chorus « When the music stops » on the multi-hued movements of the title track tips its hat to Jim Morrison’s apocalyptic « When the Music’s Over. »

The allusions deepen the farther you go. The jagged funk of « Hiroshima Mon Amour » conjures Alain Resnais’ French New Wave classic, in much louder fashion. The scorching blues riff of « I Am the Dynamite » capably channels the racist dystopia of Alan Parker’s film Mississippi Burning. Meanwhile, « Satan Made the Deal » smashes Sammy Davis Jr., Patty Hearst and the ultimate apocalyptic California dreamer Charles Manson into a sonic blender and ends up with …. swamp boogie straight outta the Rolling Stones’ Exile on Main Street?

« Rick was doubtful, but we wanted the Stones groove on there, » says Lyxzén. « The song is about how Manson could have been any of us. I don’t believe in the concept of ultimate evil or good. »

Unlike the Bush administration and its invasion of Iraq, which informs The (I)NC’s « Washington Bullets, » a no-holds-barred slam of fossil fools and their wars delivered in a hyperactive jam featuring one of the nastiest organ solos ever laid down on tape. This thematic and musical synergy is on glorious display throughout The Cross of My Calling, The (I)NC’s most mature effort to date. Brimming with invested thrash and open minds trying once again to unplug humanity from virtual reality before it’s too late, the release may be just in time for the tipping point.

« It’s hard to tell what the election will bring, » Lyxzén concludes. « We have always been avid believers that it’s not McCain, Obama or Bush, but the system that is screwed up. We’ll see what happens. But America is losing its empire, economically and politically. It is holding onto Iraq, trying to prove its worth by gunpoint. Yet the ruling elite senses that change is coming. Europe and Asia are ascendant. We’ll see what happens. »