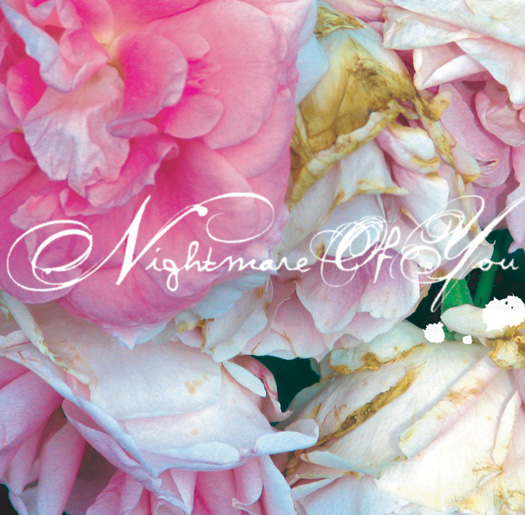 *gulp* Can we just talk about the band please Brandon?

Nightmare of You undoubtedly have “it”. Killer looks, even deadlier hooks and songs that need to be served with an ASBO to be removed from your head. Discovered by one of America’s premier tastemakers Sarah “Ultragrrrl” Lewitinn (The Killers, My Chemical Romance, Spinto Band) they’re the real deal and the most exciting U.S. band for 2006.

Equal parts Killers synths and glamour, Smiths-like pomposity and adaptation’s of Tom Robbins novels (Brandon: “‘Thumbelina is based on a Tom Robbins book called “Even Cow Girls Get The Blues”).  Nightmare Of You’s debut self-titled album is sexy, sleek, clever and totally addictive. If ‘My Name Is Trouble’s Wembley rocking chorus doesn’t get you, slacker love song ‘The Days Go By Oh So Slow’ will or ‘Dear Scene, I Wish I Were Deaf’ will have you involuntarily fishing for a lighter to stick in the air.

It’s no surprise NOY are so infectious. They learnt from the best. The Brits! “If I was listening to myself and had to go through it I would say The Smiths, Squeeze – I’ve been into Squeeze my whole life ’cos of my parents – The Beatles…”

Why are all these bands British?

“I’ve been to England probably almost a dozen times. Maybe I wasn’t meant to be an American? I don’t know… I should’ve grown up in Manchester.”

Other influences are as broad “I tend get influenced more these days by old music and books. Kurt Vonnegut is my favourite writer. I think other inspirations are other English Victorian writers like Thomas Hardy, Oscar Wilde, I like Sylvia Plath too…”

Album slowie ‘You Don’t Have To Tell Me I Was A Terrible Man’ was actually written in England (“I’m sending you a note, from a Northern English coast”) “I just don’t remember the town! Just it was in Northern England and I was on the coast and I was writing a postcard to a devil woman.”

The devil woman in question lived in Long Island, where Brandon grew up and where two years ago he formed NOY alongside high school friend Joseph McCaffrey (guitar) later joined by Ryan Heil (bass) and ex-Rival Schools drummer Sammy Siegler after disbanding his old band Movielife. Two years hard slog supporting the likes of My Chemical Romance and touring in the back of a van themselves (“in the belt buckle of the bible belt”) has hardened their resolve they’re the best new band around.

“It’s kinda popular in music these days to be like – we suck, we suck, we suck. We’re dumb, we’re stupid, we just wanna rock. I’m not afraid to say I love our band. Honestly you can ask any body or read any interview, our band is pretty much my favourite band.”

Will you still love them when you all turn into multi-millionaire heartthrobs?

“There’s worse things that could happen, as long as we’re still writing good songs. If we do become heartthrobs we’re gonna spread the proverbial NOY seed. We wanna procreate, we wanna be able to instill our genius seed into as many willing women as possible”

Ready or not, here come Nightmare Of You…