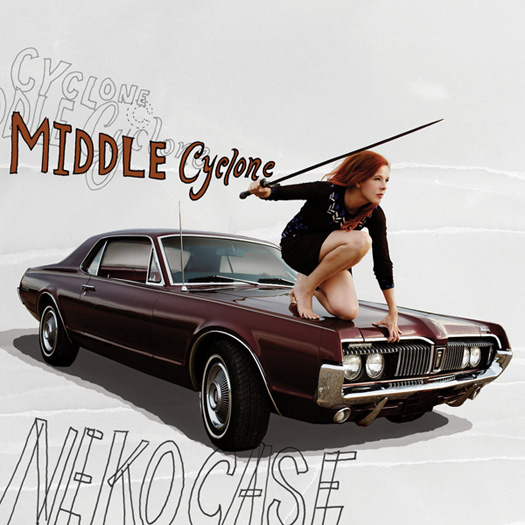 There’s a special challenge to being an artist in this increasingly fractured cultural age; a delicate balancing act, between being of your time, and striving for timelessness. Few contemporary artists even try. Neko Case is an exception.

Case’s last album, 2006’s Fox Confessor Brings the Flood, brought her to that nexus where critical acclaim meets commercial success. But Case’s impact can’t be measured merely in chart placements or press plaudits. It’s her ability to connect – on an uncommonly deep and meaningful level – with her audience. She’s one those artists, you see: the kind whose songs linger in your head, your heart and soul long after the record has stopped spinning.

While Case’s creative evolution has made for an impressive story so far, she’s about to write the most remarkable chapter in that continuing saga with the release of her sixth studio album, Middle Cyclone.

The tornado that blows through the title and several songs on Middle Cyclone is an apt metaphor. Neko has famously taken her own twisted route, lighting for a time in the South, in the West, in the Northwest, in Canada, flirting with as many musical styles as homes. She is settled—or unsettled—in Tucson for the moment, with dreams of moving fulltime to the former dairy farm she owns in Vermont. She recorded the new album in both locations, as well as studios in Toronto and Brooklyn.

For Case, the beauty of making music, of creating, is that it remains a mysterious, confounding and, occasionally, contradictory process. “When I toured for Fox Confessor one of the things I said in interviews about that record was that I don’t like writing love songs, that I can’t write them,” she recalls. “Of course, as soon as I said that, I ended up writing a bunch of love songs.”

It should be noted here that Case’s “love songs” are not the typical boy- meets-girl variety, as the opening track, « This Tornado Loves You,” dramatically attests. “What would it be like to be pursued by a force of nature?” asks Case. “That’s a frightening and exciting prospect.”

Case resists the temptation to see the tornado as metaphor for something more personal, like a destructive relationship from her past. “Of course, I’m fine if people want to interpret it that way, but for me, the song is very literal,” she says.

Neko is equally earnest when she sings exultantly about the revenge of caged animals on their keepers, in the polemic “People Got A Lotta Nerve.” The lyrics we’re tempted to read as ambiguous and layered (“But you seemed surprised when it pinned you down/ to the bottom of the tank… I’m a man-eater, and still you’re surprised when I eat you”) are in reality the plainest. Neko’s killer whales and elephants really are killer whales and elephants. But with a magician’s gift for misdirection, she keeps us off balance, questing and questioning.

Like the old tale of the scorpion and the frog, Case’s message here seems to be that instinct is immutable. It’s an idea she explores further on the anthemic “I’m An Animal.” “I feel like one of the real tragedies is that, as a species, human beings are constantly trying to deny or sublimate our natural instincts,” says Case. “And I’ve made a conscious effort not to do that, but to trust myself, both in my life and in my work.”

Instinct runs through Middle Cyclone as a theme and a goal, most often and most forcefully as the instinct for love. “But,” notes Case, “only in the sense that the songs are about the need for love — no matter how cool you think you are. What other people might call ‘love songs’ I think of as homages. They can be to a person, a region, a feeling, even sad feelings.”

That notion is captured vividly on “Pharaohs” – a kind of cousin to Fox Confessor’s “That Teenage Feeling” – as Case’s character pines wistfully for an idealized romance that seems to exist only in the imagination: “You kept me wanting…like the wanting in the movies and the hymns,” she sings, “I want the Pharoahs, but there’s only men.”

As you listen to the album, Case’s evolution as a writer is, at times, almost overwhelming. The modest lyrical aims of her debut LP – – released just over a decade ago – – have been continually outstripped with each successive effort, and Middle Cyclone continues that trend in spectacular fashion.

And then there’s the songs she didn’t write. Having covered everyone from Bob Dylan to Aretha Franklin, Case’s ability to re-make the material of others has long been celebrated. On Middle Cyclone she again flexes her interpretive muscles re-imagining a pair of early-‘70s gems: Sparks’ “Never Turn Your Back on Mother Earth” and Harry Nilsson’s “Don’t Forget Me.”

Sparks’ 1974 song was an obvious choice, fitting perfectly into the foreboding nature-oriented theme of the album. “Plus, I just love Ron Mael’s lyrics,” says Case. “Sometimes I go to the Sparks website and just read their songs as poetry. ‘Cause they’re bizarre and really controversial, and tongue-in-cheek and funny – all at once.”

With the Nilsson tune – an emotional farewell to his ex-wife originally included on his 1974 party album Pussycats – Case felt a deep tug in funny-sad couplets like: “I’ll miss you when I’m lonely, I’ll miss the alimony too/Don’t forget me…just for a little while.”

“The song has a Roger Miller and Ray Davies quality to it,” says Case. “That heartbreaking comedy line that punches you in the gut and makes you cry that much harder.”

Case decided the only way to record ”Don’t Forget Me” was to turn the original’s grand orchestral arrangement on its head. She began answering ads on Craigslist advertising free pianos, gathered half a dozen of them up in her disused Vermont barn, and invited a group of friends and fellow musicians to form a ragtag “piano orchestra” to play on the song.

Middle Cyclone is awash in similar moments of sonic inspiration and homespun creativity. In one magical interlude we hear the sound of birds chirping, just as Los Lobos’ Steve Berlin begins a midi sax solo. “Which I think is so hilarious,” says Case of the charmed collision. “We’ve got natural robins and unnatural midi sax. But somehow they work perfectly together.”

With Neko’s indefatigable touring band (guitarist Paul Rigby, bassist Tom V. Ray, vocalist Kelly Hogan, multi-instrumentalist Jon Rauhouse and drummer Barry Mirochnick) building the bedrock of the tracks, Case was able to bring in a collection of friends and fellow travelers including M. Ward, Garth Hudson, Sarah Harmer, and members of The New Pornographers, Los Lobos, Calexico, The Sadies, Visqueen, The Lilys, and Giant Sand, among others. “Everyone who worked on the record had their input and sculpted things,” says Case.

Ultimately, for Case, the songs and themes on Middle Cyclone express a long internal struggle, a pitched battle between nature and nurture. “Things like animals and nature, they’re located in the tender receptor of my brain. And I’m just now trying to come to terms with the notion of loving people as much as I love those other things – because I grew up in a way that made me love the one but not the other.’

“So, I guess I’ve been working that out for myself, and these songs are my way of reconciling those feelings.”