« THE SPIRIT OF APOLLO » 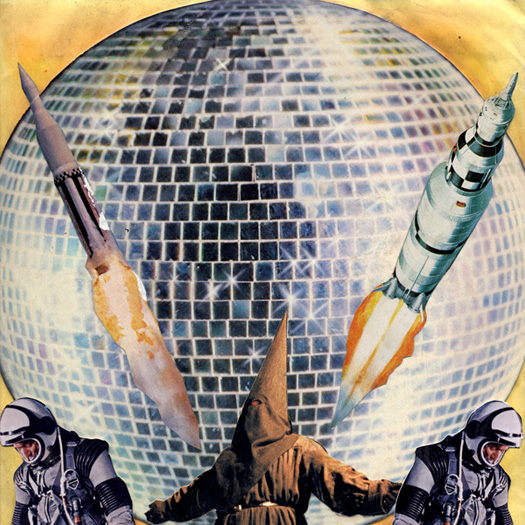 N.A.S.A. (North America/South America), and their worldwide debut The Spirit of Apollo is set to be released on Anti- on February 16. 2009. N.A.S.A is an ongoing creative collaboration between two lifelong music aficionados, Squeak E. Clean ad DJ Zegon, and their friends, friends of friends and musical heroes.

While N.A.S.A. stands for North America/South America and contains a number of superstar artists from both coasts of the US, it is about as far from a tension-building geographical showdown as a record can get. Rather, The Spirit of Apollo was born with the righteous goal of bringing people together through music and art, and that is exactly what masterminds Squeak E, Clean and DJ Zegon have done.

Unexpected collaborations abound on the eighteen track release. Tom Waits growls over Kool Keith, Karen O taunts while Ol’ Dirty Bastard gives shout-outs to Wu Tang and N.A.S.A from the grave, and David Byrne, Chuck D and others expound on the evils of « Money. » In spite of the range of performers, the pairings seem organic, inspired and make perfect sense on the first listen, never coming off as ironic or impulsive.

That passion and appreciation for music is the driving force behind The Spirit of Apollo. Conceived in a crowded party in Sao Paulo and nurtured by a shared love of vintage Brazilian soul and funk records, N.A.S.A. was born when Spiegel and Gonzales got together in a studio and hit record. Five years later, after thousands of miles traveled, many favors called in, countless hours spent in recording studios, bartered, traded and out of pocket, N.A.S.A. landed at Anti Records, a label that is home to other likeminded visionaries such as One Day As A Lion and N.A.S.A.-guest vocalist Tom Waits.

Squeak E. Clean and DJ Zegon will put their turntable skills to good use as N.A.S.A. goes live with dancers, visual effects, art installations and special guests. Also expect more announcements as this album turns into a multi-media extravaganza with the help of more friends, this time from the art world.

ABOUT SQUEAK E. CLEAN: Sam Spiegel is a composer, producer, DJ and remixer. Sam has spun all over the World – from award shows and clubs to premieres and parties and fashion shows in Japan, Brazil, Morocco, Canada, Australia, England and all over the US. Spiegel frequently collaborates with his brother, filmmaker Spike Jonze. Notably, he scored and compiled the soundtrack for the Jonze-directed cult classic « Yeah Right! » (the top-selling skateboard movie of all time), and the two worked together with Karen O from the Yeah Yeah Yeahs on an Adidas commercial that won the Gold Lion for Best Music at the 2005 Cannes International Advertising Festival and Silver for Original Music at the 2006 Clio Awards. While Spiegel has produced and remixed tracks for Maroon 5, Iggy Pop, Kylie Minogue, the Eels, Ben Lee, the Cardigans and many more, 2006 marked the first Squeak E. Clean fully-produced album. Show Your Bones, the Yeah Yeah Yeahs sophomore record, was named « Album of the Year » by the likes of Rolling Stone, NME, and Spin, and was nominated for a Grammy for best alternative album.

ABOUT DJ ZEGON: A professional skateboarder who has evolved into one of the most sought after, cutting-edge DJs in Latin America, Ze Gonzales has carved out his own musical niche that marries traditional Brazilian beats with underground hip hop, creating a sound and vibe that places Zegon in a class all his own. Recently, Ze spent two years in Los Angeles working with longtime friend – and fellow Brazilian — Mario C, the producer and engineer behind such artists as Beastie Boys, Tone Loc, Young MC and Bjork.