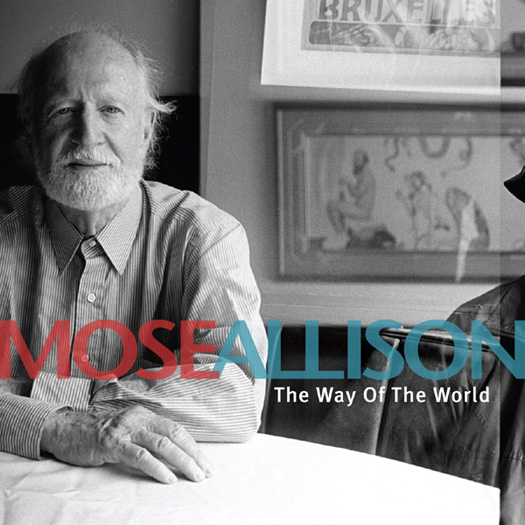 Mose Allison’s new album and ANTI- debut The Way of the World arrives March 22nd , 2010, marking his return to the recording studio after a 12 year absence. Working with maverick producer Joe Henry, Allison has found his most sympathetic setting in years, surrounded by young, vibrant players, who add surprising slide guitar and some sinewy saxophone to the classic Mose sound; The Way of the World also features Mose’ first-ever duet with his daughter, singer Amy Allison. Yet this album is all Mose, from the solo song “Modest Proposal,” a sly scalpel taken to organized religion, to the modernist, Monkish changes he takes the band through on the lone instrumental, “Crush.” Remarking on the outsized influence that Allison has had on several generations of musicians, producer Henry writes in his heartfelt liner notes, “For many of us, Mose Allison has long stood as a great swaying bridge, spanning our strange, stormy times: linking the fifties to the present; the mystical country blues to the urbanity of jazz; tough beat poetry to wistful self-reflection; seduction to candor, heart to mind, wit to wisdom; Mark Twain straight through to Willie Dixon, with Chico Marx barking directions from the backseat, James Stewart at the wheel.”
Allison occupies a hallowed place in blues songwriting, sitting alongside Dixon and Percy Mayfield in bringing a witty, urbane sensibility to the modern blues. Also well documented is his sway over a generation of British rockers – most rock fans know the Who’s blistering run-through of “Young Man’s Blues” on Live at Leeds, but are less aware of Mose’ influence on John Mayall, Van Morrison, Ray Davies, and the Yardbirds, all the way through to the Clash, who covered “Look Here” on Sandinista. Then there is that subtle, indefinable fact of Mose’ voice, that laconic, laid-back singing style without which we would have no Norah Jones, Diana Krall, Belle and Sebastian, and Schoolhouse Rock. Not to mention Allison the respected pianist, with his nods to Monk and Garner, and a slew of five-star Downbeat reviews in his piano bench. The Way of the World finds Mose playing and writing with a new looseness, a playfulness and verve that belies his years, while behind the offhand swing lies the weight of those years, in the slowburn vitriol of Mose’s mind in full gear. That canny blend of easy swing and lyrical incision makes The Way of the World an instant classic, in Mose’ or anyone else’s repertoire.