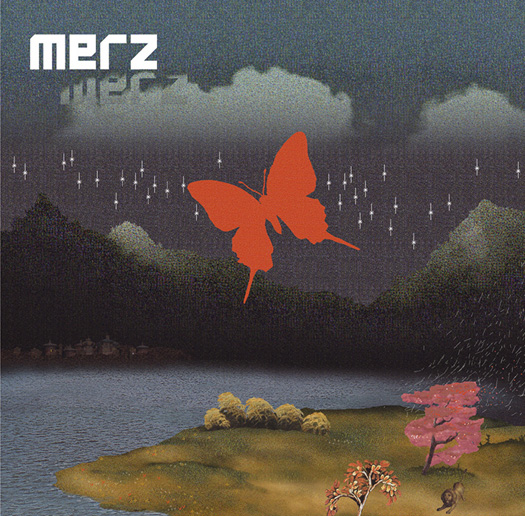 The subject of numerous billboard poster campaigns, tv documentaries and the kind marketing that Jade Goody dreams about, it was not so long ago that Conrad Lambert aka Merz was ubiquitious and on the tips of every taste making tongue through out the land. “I couldn’t spit for hitting myself… “ he says amusingly regarding his past omni presence ‘ it was ridicuous’.

Stardom came and went, anonymity and the dole followed. All prior to his magical return in 2005 with the tender and triumphant ‘Loveheart’ that firmly reinstated Lambert as a contemporary and vital songwriter of which the UK should be proud. Naturally, the man behind Merz know’s a thing or two about the high’s and low’s of the music industry.

Originally signing to Sony/Epic for a deal that grew another zero with every review and unwisely championed by the label as the “English Beck”, the ensuing hype was relentless and somewhat unforgiving. However, the gale that surrounded Merz’s arrival soon exhausted, the prospect of world domination dissapeared and the genre defying album that promised so much, deleted.

“I couldn’t get arrested for 5 years after and spent most of my time sitting in the cafés of Bath Spa, however, always making music, every day.” Lambert remarks reflecting on his plight following the dizzying ride of his debut. Over the years, surroundings and circumstances may have changed but his determination to return to the muscial fold remained ever central. “Eventually I ended up back on the dole for the first time in 8 years. Huddersfield dole office, a building I never thought I’d have to enter again, the hardest thing of all.”

Ironically it was within the walls of the job seekers office that by a twist of fate Lambert found the money to finance his follow up and complete his pilgrimage back to being a valued recording artist. “Still, I won’t knock Income Support because with a bit of help from a decent guy who was my ‘back to work advisor’, I was put on a business course which deferred me from having to take the alternative, a job at Ratners Jewellers. After the course I received  a Local Enterprise Loan and managed to finish off my second album Loveheart.

Six years on and a career that some pronounced dead upon arrival was magnificiently ressurected by the magical Loveheart which Mojo and Q hailed as a “Lazarus like return” and a “a vivid talent re-awakened” respectively. While Lambert also re-established himself once more as a credible and dynamic showman with incredible performances at the “The Green Man” and “End Of The Road” festivals, but also across Europe with a tour with The Earlies.

Now with a new album on the way in 2007 and Loveheart still receiving plaudits, it seems fitting once more to bring to light the album that catapulted Merz on to the stages of a vibrant UK music scene in 1999. An incredibly diverse debut that contains tracks such as Many Weathers Apart, Engine Heart, Lotus and Blues Became and that stand tall today despite being unavailable for the best part of the millenium.

The record has been remastered, repackaged and remixed, albeit with a few amendments as Lambert explains. “I wasn’t sure whether I should dabble with the album and its songs – should an album be left as it was, a historical sound document of its time and the creative forces surrounding it? I decided, in this case, not.  There were some decisions that were made back in 1999 that were made in a cautionary manner. Having this opportunity to jig it around I wanted to omit some of the results of that caution and use what I thought were, with the benefit of hindsight, simply better versions and songs.

The two disc reissue see’s the removal of CC Conscious from the original tracklisting, which is now replaced by the previously unavailable Nutshell, and different versions of Many Weathers Apart and Lovely Daughter. It also comes with a slight change to the track listing. “I don’t know if it’s better for it, just different.”. Whereas, the second disc comes with previously unheard versions of songs taken from the original recording sessions. The highlight’s being the epic version of Blues Became featuring an orchestra and a drum band, recorded on Pink Floyd’s Victorian house boat studio on the Thames and a newly recorded 2006 version of Lovely Daughter

I’m chuffed that I’ve had the opportunity to dust down this record of mine, a lot of talented people worked on it.” says Lambert, reflecting on the processes involved in making both his debut and follow up “Loveheart, couldn’t have been more contrasting experience. Feast or famine as they say. “However, I’ve just started recording another Merz album, hopefully its results will be something in between; a hearty meal.”

Ratners loss is very much our gain.