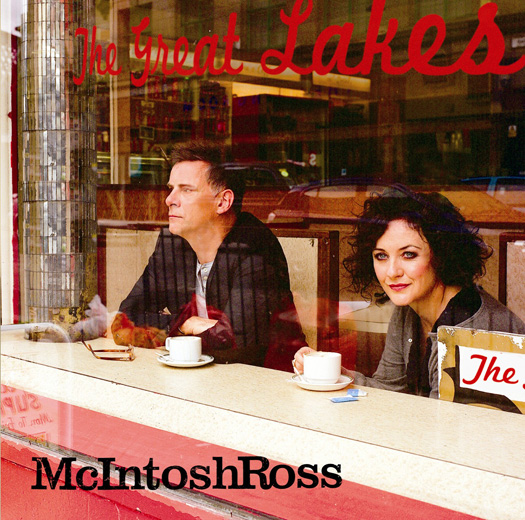 The Great Lakes, the new album from McIntosh Ross, aka Lorraine McIntosh and Ricky Ross of the multi-million selling Scottish group Deacon Blue.

After more than two decades in and out of Deacon Blue, the pair decided they wanted to make an album – together. Not an album as part of Deacon Blue. Not a Ricky Ross album with Lorraine popping up on backing vocals. But an album which the two of them could call, justly and equally, their own. The rules of engagement were kept to a minimum. They would both write and both sing. The songs would be beautiful, meaningful and simple – no unnecessary chords or complicated changes. And the couple would go somewhere other than Scotland to record them. « We knew what we’d get if we did it here in Glasgow, » Ricky says. « We thought if we go somewhere else and get different people to work with we’ll come up with something that will surprise us. We wanted to record music together that was completely fresh. »

‘Somewhere else’ turned out to be the Red Star Studio in Silver Lake, Los Angeles and the ‘different people’ were a group of players steeped in the finest traditions of Americana music. Mark Howard was hired to produce. He has worked in the studio with Bob Dylan and Tom Waits and produced Lucinda Williams’s Top 20 album, World Without Tears. With Howard’s help Ricky and Lorraine hand-picked a band that included drummer Steven Nistor (Danger Mouse, Sparklehorse), bass player Daryl Johnson (Emmylou Harris, the Neville Brothers) and the great Doug Pettibone (Lucinda Williams’s guitarist) on pedal steel and banjo. Completing the line-up was guitarist and backing vocalist David Scott (of The Pearl Fishers), an old friend of Ricky’s and Lorraine’s from Glasgow, who produced Ricky’s last solo album, Pale Rider.

The result is The Great Lakes by McIntosh Ross, an album of supreme melodic grace and spiritual purity which combines echoes of the duo’s Celtic homeland with the alt.country twang of the American south – a seamless blend of Caledonia and California, if you will. « I don’t think we consciously thought of Scotland or America, » Ricky says. « It was more to do with the kind of songs we wanted to sing. These became more folky as the writing went on, while the more mainstream pop songs got disregarded. The main thing was that if it didn’t seem like a genuinely significant song to both of us then it didn’t get on the record. »

With Deacon Blue currently on an indefinite hiatus, bar the occasional get-together for special gigs such as this year’s Liverpool Summer Pops festival, Ricky has branched out as a songwriter, and written songs both for and with a variety of artists including James Blunt, Ronan Keating, Will Young, Nanci Griffith, EG White and Jamie Cullum among many others. Lorraine, meanwhile has launched a parallel career as an actress, appearing as a regular character in the Scottish soap River City, the current BBC drama series Hope Springs, and in several feature films. The irony is that singing is now more central to her life than ever before. « I sing all the time, » she says. « I sing more than Ricky. He couldn’t survive if he could never write another song, but I simply couldn’t live without the singing. »

The Mexican Institute Of Sound