MATTHEW RYAN VS. THE SILVER STATE 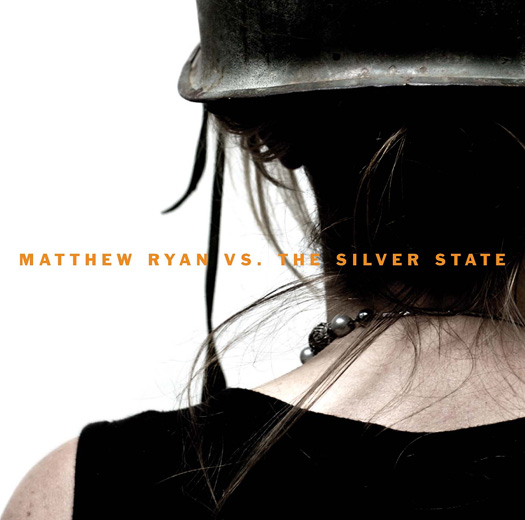 Matthew Ryan is one of America’s most prolific songwriters.  He has quietly gone about his work for ten years now, releasing 11 albums while sharing stories and stages along the way with Lucinda Williams, Badly Drawn Boy andTurin Brakes.  Celebrated author Nick Hornby and songwriters Josh Rouse, Kasey Chambers and Mark Knopfler are fans.

Now Matthew returns with Matthew Ryan vs. The Silver State, his most accomplished and visceral work to date. Every track was recorded live with few embellishments and even fewer edits. This showcases the sound of a brilliant writer and his band fusing the passion, indignation, hopes and struggles of his characters. Utterly human and wide-awake, this is music that feels, simply feels; a Scorsese film for the ears.

MRVSS has all the spirit, heart, conscience and muscle that make rock and roll timeless. As forthcoming as Ryan is with his songs, on MRVSS, deep layers bubble underneath.  But he does not sell, force or judge here.  Instead, these are patient, elegiac songs, crafting a mood as much as a message.  On MRVSS, what appears simple becomes epic.

Throughout the eleven songs, Ryan explores, even implores that universal but mysterious question: how do we become who we are?  He is patient and persistent, intelligent and soulful, troubled and brave, political and spiritual. This is deeply honest and unabridged music, a 50-minute opus showcasing one of the most relevant, credible and gifted artists we’ve had in quite some time.  Gorgeous, troubling, soothing and pensive, these are songs for lovers, thieves, dreamers, drunks and anyone in contemplation.  Life is its purest, most menacingly beautiful form.  Enjoy.

Matthew Ryan was born Ryan Webb on November 7, 1971 in Chester, Pennsylvania. He changed his name to Matthew Ryan in his early 20s to honour his older brother whose life was spiralling out of control.

At 15, his parents moved the family to the considerably safer and quieter peace of Newark, Delaware.  Ryan joined his first band.

Since then, He has been on 5 different labels, releasing 10 records.

Ryan’s 2006 release, From A Late Night Highrise was informed by two important developments in his life: his brother was sentenced to 30 years in prison and he lost a very close friend to cancer.

Eoman McLouglin (The Greencards) and Molly Thomas added viola and violin on a handful of songs: (« Dulce Et Decorum Est, » « It Could’ve Been Worse, » « Jane, I Still Feel The Same, » « They Were Wrong » and « Closing In »).

Kate York and Thad Cockrell sang on « Dulce Et Decorum Est, » « It Could’ve Been Worse » and « Closing In. »

Kris Donegan supplies guitar in « They Were Wrong. »

Entirely recorded in Matthew Ryan’s Garage in the summer of 2006 in Nashville, TN and produced by the musicians.