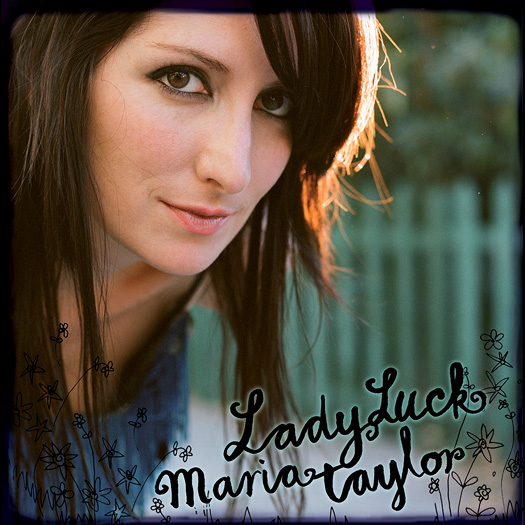 Before you listen to her new album, Maria Taylor suggests you prepare yourself. Listen to it, she says “in a dark room, with a candle or two with headphones, maybe in the bath, but definitely horizontal.” Though much of the deliciously diverse LadyLuck is inspired by the end of a relationship, it’s not dripping with sadness and grief, nor is it in-your-face empowering. Rather, Taylor strikes a stunning balance between melancholy (aching strings, hushed vocals) and uplifting (rolling rhythms, shimmering keys), highlighted by sharp lyrics that draw optimism out of sadness. This is not a woman down on her luck.

LadyLuck, Taylor’s third solo effort, is about “personal growth and the change that comes with it,” she says. Much of the album was written as Taylor was preparing for a move (to Los Angeles) and immediately after arriving. “This change in my life was so so needed,” she says, “that, whereas lots of older songs have happy words but a sad undertone, these songs have sad words but with hopeful undertones of renewal.” Change is something Taylor has welcomed in her career, which started at age 15 in the Birmingham, AL-based band Little Red Rocket.

Taylor later became one-half of the dream pop band Azure Ray and left in 2005 to strike out on her own. “I just listen to my gut…always,” she says of the move. “Something said it’s time to try something different.” In 2005 she released the bold and critically-acclaimed solo album 11:11 which featured vocals by Conor Oberst. In 2007 she delivered Lynn Teeter Flower, which showcased her growth as a solo artist, as well as her aptitude for inventive beats and featured Doug Easley (Cat Power, Pavement) and Spoon’s Jim Eno.

On LadyLuck, Taylor changes things again, trading beat-centric tracks for more guitar and vocals (though she does get behind the drums on “It’s Time”). As on previous albums, she works with Now It’s Overhead’s Andy LeMaster as well as new contributor, REM’s Michael Stipe, both of whom collaborated on the album’s final track, “Cartoons and Forever Plans.” First single “Time Lapse Lifetime,” with its orchestral strings and grand melody, is about how fast life moves and how in a moment everything can change. Appropriately, the song is punctuated by both a driving beat and lingering plaintive vocals, with breaks of near-silence for poignant turns of phrase. “Oh, we dreamed a life / and it was just like that, and just like that it’s gone,” Taylor sings as lone strings fade out. “Green Butterfly” and the eponymous track are two of the album’s highlights. The former is a dance around the room confection with racing drums, crashing cymbals, and sprightly keys. It’s a liberating moment on the album with Taylor’s vocals riding the driving beat as she ends each line with “keep on going.” “LadyLuck” is an alt-folk gem in the vein of Cat Stevens, with swelling melodies of lively acoustic guitar, trembling tambourine and airy flute, peppered with Taylor’s whispered “doot doot”. A testament to Taylor’s musical gift, the delicate but lush melody is layered with sage lyrics like “your new life it starts today /it doesn’t always work the way you planned it…. Follow yourself and hope that you know where you’re going.”

“Broad Daylight,” which seems torn from a European romance film, opens with a lone acoustic guitar and Taylor’s signature honeyed harmony. As the lyrics tell the story of a budding romance (“backstage we met / you were writing your set taped to your guitar”) the music opens into shimmering keys that drizzle down over aching strings, dangling off Taylor’s every word. “A Chance” is perhaps the most subtly complex song; it ebbs and flows as the melody lingers over the chorus, and propels through the verses. Taylor’s voice is haunting but undoubtedly self-assure and at times aggressive, from the first lines (“we both know what we did wrong / when I woke up he was gone… there’s really nothing more to say”) down to the last line, “and you continued to call.” Intimate, earnest, and complex, LadyLuck is Taylor’s most stunning effort to date. Whether you listen to it in the dark or light, with headphones or on the stereo, horizontal, vertical, or diagonal, LadyLuck will move you to cry, to dance, to sing, and everything in between.