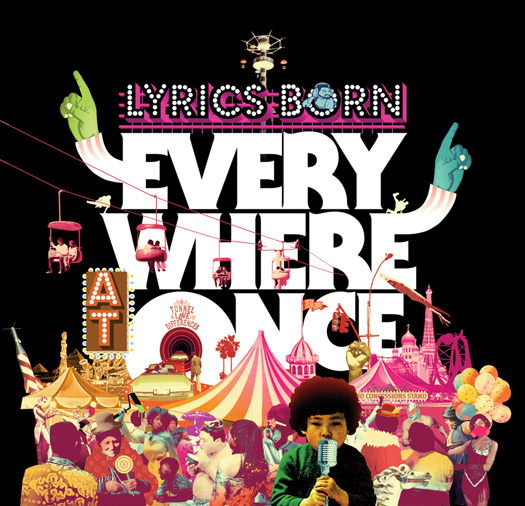 One of the most critically acclaimed and best-selling independent hip-hop artists of this era, Lyrics Born is not the type to sit still. While recording his fourth solo album, completing new projects, and making decisions at Quannum Projects, he still averaged over 150 sold-out shows a year. He’s a whirlwind.

« Everything is kinda happening all at once all the time. You’re kinda being bombarded, » says hip-hop’s premier multi-tasker. « The challenge for me is this: How can I keep myself inspired and entertained? How can I go in different directions yet still be entertaining to more people than before? »

Everywhere At Once is not just the title of Lyrics Born’s most accomplished record to date, it’s an answer to all of his questions. In an age of narrowcasting and niche marketing, the new record reflects LB’s determination to follow his own muse wherever it will lead him. « I stuck to my guns, » he says on the trunk-busting opener, « Don’t Change ». « I’m about the funk. »

His breakthrough solo debut, Later That Day, was a huge indie seller and one of the top 5 most critically acclaimed American hip-hop records of 2003 alongside Jay-Z’s The Black Album and Outkast’s Love Below/Speakerboxxx. With the release of Everywhere At Once, rapper/producer Lyrics Born finds himself part of a new vanguard of hip-hop artists like Gnarls Barkley, M.I.A., and Kanye West who are pushing the edge with compelling yet instantly accessible sounds.

Everywhere At Once reveals the full breadth and depth of his skill and vision: minimalist grooves, reimagined electro, East Bay greasy funk, devoluted punk, futurist dancehall, postmodern blues, tomorrow’s slappers. He’s an artist who is not interested in the limits set by the market or even his past triumphs.

« I get bored really easily. I just can’t write the same song over and over again, » he says. « Maybe it’s the tradition that I came up in, the crew I came up with, maybe it’s where I’m from, maybe it’s just who I am. And frankly, I think the music needs that. People need that. »

To move away from the drudgery of sample-based production and the risk of legal clearances, LB changed his method for this record. « I was doing the same type of thing, sitting here hitting these pads, trying to pitch this sample, » he says. « I like working with people and I’m more effective in the studio with musicians, directing traffic, organizing and putting the tracks together. As a result, the sound is much different. It’s bigger, it’s more hi-fi. »

Although soul-baring songs have marked Lyrics Born’s career—think his 1996 indie hit, « Balcony Beach », or 2000’s global smash « I Changed My Mind »—Everywhere At Once is also his most personal record to date. Songs like « Whispers » and « Skin I’m In », he admits, are his attempts to come to grips with the passing of his best friend Benjamin Davis and his identity issues growing up Asian American, respectively. « I don’t think that people know a whole lot about my personal experience, » he says. « And as a people, Asian Americans are kind of like background music in this country. These are parts of my experiences so I just wanted to talk about it. » The album reveals much about one of the most beloved artists in the game.

His 1997 debut with Lateef the Truth Speaker, Latyrx, sold 100,000 for his influential indie label, SoleSides. When the label was reborn as Quannum Projects, the album he helmed, Quannum Spectrum, yielded him an international hit with « I Changed My Mind ». His day-in-the-struggle concept album, Later That Day, featured « Callin’ Out », a monster crossover that lodged at #1 at the influential rock station LIVE 105 for 5 weeks. Same !@#$ Different Day collected new tracks and alternate versions of tracks and became Quannum Projects’ fastest seller. Overnite Encore captured the excitement and intensity of LB’s live show, and produced another chart-topper, « I’m Just Raw ».

Lyrics Born has been one of the most licensed hip-hop artists in the world, with placements on Diet Coke, Motorola, Nokia, and Vans commercials, TV shows such as « Entourage », « Six Feet Under », « What About Brian », « Gossip Girl », and « Gilmore Girls », films like Michael Mann’s « Collateral » and Justin Lin’s « Fast And The Furious: Tokyo Drift », and videogames by EA Sports, 2K Sports and Atari. He has had sponsorships with Puma, Adidas, Diesel, and Evisu.

LB recently finished production on Joyo Velarde’s anticipated debut, Love And Understanding. They will be heading out on tour, one of their favorite places to be. From his debut at San Francisco’s The Stone in 1993 to his festival performances at Coachella, Lollapalooza, Bonnaroo, Vegoose, Langerado, and Australia’s Good Vibrations Festival, Lyrics Born has been one of the best shows in hip-hop, drawing standing-room-only crowds around the world. His next project will be to assemble a James Brown-styled revue, featuring other musicians, comedians, entertainers, and more.

« I came up in a tradition where you made records, then you toured, » he says. « I like seeing people having a good time. That’s how I feel like I’m moving forward, that things are in motion. I’m a performer—it’s part of who I am. »