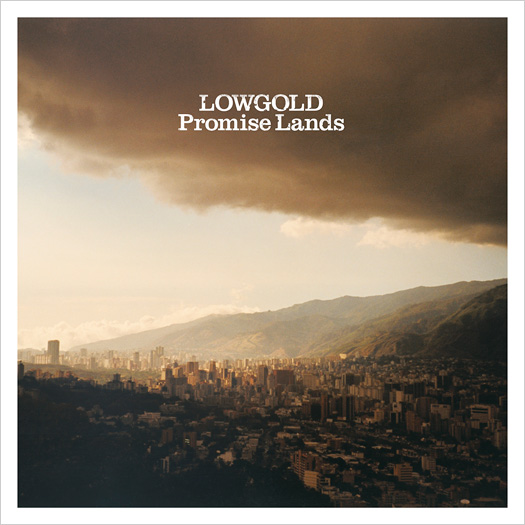 Into every life a little rain must fall and the clouds rolling across the cover of Promise Lands, the new album from Lowgold, certainly guarantee that somebody, somewhere, is about to face a deluge. The trio – singer Darren Ford, guitarist Dan Symons and bassist Miles Willey – know what it’s like to look up and see a storm gathering: since releasing their debut album, the quietly impressive Just Backwards Of Square, in 2001, they have faced the heaviest of weather. As they point out, however, on the cover of Promise Lands you can’t tell whether the dark skies are coming or going, about to unleash the heavens upon your head, or bring some much needed sunlight.

The ambiguity makes perfect sense in the context of the band’s career. Expansively melancholic, emotionally astute, and wreathed with comparisons to the likes of Wilco, Buffalo Tom and Built to Spill, they unfortunately found that even their talent in turning a song as fine as In Amber or Beauty Dies Young couldn’t ward off the looming threat from the music industry. The collapse of Nude Records left them staring down the spectre of bankruptcy; signing to Sanctuary in 2002 didn’t offer them much respite and their second album, Welcome To Winners, was cruelly neglected. « At that point, » says Dan, « it seemed as if it was going nowhere and not very long after it had begun. » Keen to mark the slow dissipation of something that had been so precious to them, in 2005 they released the wryly titled Keep Music Miserable, a collection of unreleased songs and « interesting little bits », on their own Dedtedrecords label.

« And that, » says Dan, « as far as we were concerned, was the end of it. Everything we had ever done had been released and there was no particular reason to keep being in the band or even particularly keep being pleasant to each other. »

Darren takes up the story.

« Things had got so bad – nobody ever wants to start a sentence like that – I found myself in Northwick Park Hospital doing medical experiments. I was a human guinea pig for money. » This, as Darren points out, was the same hospital where « the guy went horribly swollen » after a disastrous drug trial in 2006. « It was, » he says, « a very near miss. »

Yet even at this lowest ebb, Darren hadn’t completely resigned himself to a « career » in testing lung inhalers.

« All through the dark times, I’d continued writing songs but I had absolutely no intention of letting other people hear because in a very twisted way I figured it was better I didn’t have to endure everything going wrong with another batch of songs. So like Silas Marner I hoarded a load of songs under the floorboards for no good reason.

A good reason to rethink this hermetic approach to songwriting came when the band were touched by genuine tragedy: the death of Martin Gilks in April 2006, one half of the two brothers who managed Lowgold since 1999. Lowgold reunited to play at his funeral. « After Martin spending all that time fighting our corner it was his death that brought us back together again, » says Darren. « It’s a horrible thing to talk about but that’s what happened. » Given a shot of « instant perspective », the band started to talk again.

« Dan asked me what I’d been doing because I’d pretty much gone to ground, » explains Darren. « He asked to hear the songs I’d written and he said ‘what the hell are you playing at? Why aren’t you doing anything with these?’ He said I was being an idiot and said we should try and do something with these songs as Lowgold. »

The band headed to The Dairy in Brixton at the start of 2007 and recorded Promise Lands in ten days. Gareth Parton (The Go! Team) mixed it, they signed a new publishing deal and then they stepped back, and, as Dan says, thought « Fucking hell, we’ve got a finished record here! Then we did some of the fun stuff. »

To call Promise Lands a happy ending, however, would be wildly inappropriate: it is, as Darren says, « a very sad record. There are bits of it that are quite raw, bits of it that are quite difficult to listen to for the same reason they were quite hard to write. It’s probably the most personal thing that we’ve done. » It might have been written in hiding, at a low ebb, away from the glare of the world, but Promise Lands is full of human warmth. Every song, from the contemplative opener Clear, a testament to « letting go », to the angry energy of Dead Sea, bears witness to the fact this music was « written purely for the joy of writing songs », uncompromised by thoughts of release schedules and sales figures. Nothing Stays The Same cuts loose from its fear of the unknown with a burst of guitar adrenalin; Just Like Skin uses bitter experience to acid-etch a magnificent song; Hope And Reason ends the record with stately yet heartbreaking survey of the terrain of sadness. Promise Lands is a record clouded with loss but it also shows how much Lowgold – and their listeners – still have to gain from their music. The clouds, it seems, are finally rolling away from the sun.
Lowgold are,
Darren Ford – Vox, Guitar, Drums
Daniel Symons – Guitar
Miles Willey – Bass
www.lowgold.co.uk