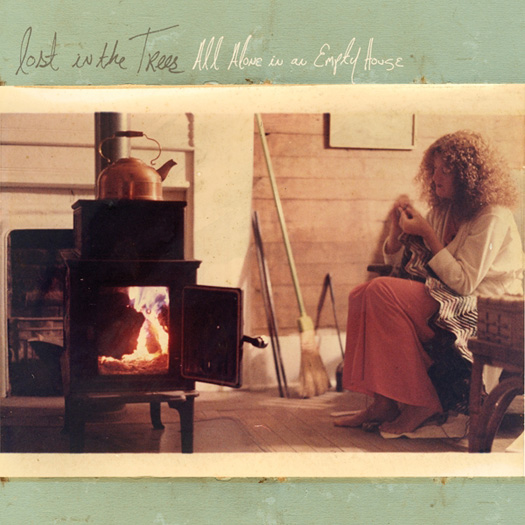 ―For me, classical composition is a very humble thing,‖ says Ari Picker, founder of Lost in the Trees, a musical collective from Chapel Hill, North Carolina recently signed to ANTI Records. ―I’m no expert, by any means, but I am blown away by orchestral music. Ideas that are stale or old hat to classical people are still pretty magical to me. All I want is to take a pinch of that brilliance, and put it into what I do.

Picker, a composer by training and a songwriter by inclination, describes his band as « Orchestral Folk Music » because it features arrangements which harness both the dramatic power of classical music and the more intimate sounds of the singer-songwriter tradition – strings and brass meshing effortlessly with accordion, bells, musical saw, banjo, and mandolin. The group‘s Anti- debut, All Alone In An Empty House was co-produced by Scott Solter (St. Vincent, Mountain Goats, Okkervil River, Erik Friedlander) who creates a space in which both varieties of music co-exist with stirring results. The dramatic and symphonic elements of classical music merge with the accessibility of American folk and pop to create a sound both grandiose and intensely personal.

The album is equally striking for the consistency of its lyrical content. Picker‘s songs are about how family life intertwines with a creative life – and how such generative states of being are rife with emotions that are amorphous, inspiring and painful all at once. Spaces, places, and people are left barren and devoid of life—fires consume, babies die young. But the flipside of this creative destruction reveals itself when Picker‘s characters and settings are left ripe with potential—a painter takes a walk in the woods, empty rooms wait to be filled. The album becomes all the more powerful when you discover its subject matter is literal in unexpected ways.

―The lyrics to the title track ‗All Alone in an Empty House‘ are taken from powerful arguments my parents had while living in the house where I was born, says Picker. ―The song‘s locations and happenings, my father‘s stone wall, the tower off the side of the house that he eventually moved into, my twin sisters who died at birth, my mother’s extreme depression, the emotional and sexual abuses, they are all real. But my intention in sharing them is to turn this hard reality into art, something that the listener may find comfort or hope in.

Picker returns again and again to these memories, transmuting them into images that serve as both facts and symbols–blurring the line between plain confession and furtive metaphor, coming of age story and spirit quest. In this way, the album recalls the mysterious power of indie rock touchstones (Neutral Milk Hotel‘s In the Aeroplane Over the Sea, Arcade Fire‘s Funeral) and older records from the Golden Age of the singer-songwriter (Van Morrison‘s Astral Weeks, Joni Mitchell‘s Blue).

« Music has played several roles in my life, » Picker says. « The songwriting side has humanistic elements. It’s a defense mechanism against extreme relationships such as my parents had. Singing is a way of giving something up and letting go. The classical component of my music has more spiritual connotations. I feel like I‘m soaking something up, like I‘m being spoken to by something very elemental. »

―I‘m not sure what happens next, he continues, discussing the future of his music. ―I’d like to move on from writing about such personal matters, and perhaps pay more attention to others. Recently, though, its felt like there’s been some kind of convulsion to this story. Maybe that‘s the end, or maybe that‘s the sign it deserves a sequel.

Ari Picker on A Musical Education:
―I started my musical education with whatever was on the radio and slowly worked backward: The Beach Boys and Brian Wilson’s amazing ‗pocket symphony‘ sound. The Beatles incredible arrangements on ‗Eleanor Rigby.‘ I discovered Pink Floyd’s Atom Heart Mother and fell in love with the way it opens with a huge 23-minute orchestral suite, then ends with three folk songs. I was amazed and confused by it, and in order to understand it, I would listen to it over again and over again.

―In this way, my interest in composition started as a very humble thing. Eventually—thanks to a supportive music teacher—I ended up at Berklee College of Music‘s Film Scoring Program, where I took music history courses that introduced this huge world of classical music.

―My influences evolved week-by-week and chronologically–from Gregorian chant to Baroque to the Classical period to the Romantics to modern composition. Alongside that my need for emotion in music seemed to evolve. A lot of early music seems devoid of emotion because that’s not what it was meant for. Eventually, though, there’s this switch from the classical period to the Romantics, and the difference is feeling. Hayden would pour out entertainment pieces for the king while Beethoven would sit in a room and pour his heart out on paper.

―Eventually this took me back to the kind of popular songs I began with, confessional music like Joni Mitchell’s Blue — heart-wrenching lyrics about her relationships — and eventually I began to come up with my own confessions. I’m no Leonard Cohen. The best thing I can do is say the things only I can say, personal stuff, and in the case of this record, about my parents relationships with each other and with me.

―I respect classical music and I put elements of it in the songs I make, but at the same time, when it sounds like Vivaldi it’s just the best simulation I could come up with — and probably involved me looking at his scores and fumbling around for days. Writing in that style takes an extreme amount of discipline, and I was not brought up in an environment suited for it, so I‘m doing a lot of catching up. In my new songs, I’m getting into the harmonic ideas of Berg or Schoenberg or Alfred Hitchcock‘s favorite, Bernard Herrmann, and suddenly I‘m back at film music again.

―Most important to me is that when I talk about classical music, I don‘t want to come across as a highly educated defender of the genre. I just want to champion the excitement that I feel about it in the simplest possible terms.

―A few years ago there was the soundtrack for Wes Anderson‘s The Royal Tennenbaums and somehow there it all was — Ravel next to Paul Simon. I look at both my own songwriting and the music I admire most and the common quality is that it‘s a sort of mash up of everything, and a labor of love.