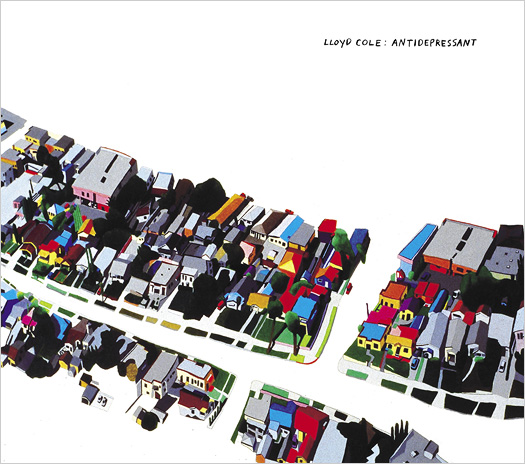 “Antidepressant” is Lloyd Cole’s second solo album release for Sanctuary Records and follows on from “Music In A Foreign Language” released in June 2003.  “Music In A Foreign Language” was received to critical acclaim and was the result of five years touring as a solo artist and reflected a more folk leaning side of Lloyd’s work.  “Antidepressant” however is a more band orientated release and we expect Lloyd to be touring with a handful of additional musicians to support the release.

For those (hopefully very few) of you who may not be familiar with the artist, Lloyd Cole has been making records for just over 20 years now. That’s how long it’s been since ‘Rattlesnakes’, Lloyd Cole & the Commotions’ debut album, was released. That record, a cultural studies degree with guitars and great tunes, rightly won the English (not Scottish) singer-songwriter a coveted place in the NME Top 100 albums of all time – just ahead of the Beach Boys. It still provides a familiar heartbeat for his live shows.

After five years and two more albums with the Commotions, Lloyd wound up solo in New York where he wrote the magnificent, brooding, ‘Lloyd Cole’ album which was followed by 1991’s ‘Don’t Get Weird On Me Babe’ – a schizophrenic, Scott Walker meets Glen Campbell affair and ‘Bad Vibes’ (1993) a darker set altogether as Cole experimented with sounds and producers, 1995’s ‘Love Story’ was a celebratory return to form which included the surprise hit single ‘Like Lovers Do’. 1997 saw the birth of a new Cole-led band, the Negatives. ‘The Negatives’ album followed in 1999 and that band contributed to a boxed set in 2001 which included the magnificent ‘Etc.’ album as well as instrumental and live CDs.  After several years touring as a solo artist, a further solo album “Music In A Foreign Language” was released in 2003….which takes us to the present!

Further details will be circulated as soon as possible.  We expect Lloyd to be in Europe for promotion to support through September.  Thereafter, we understand there are plans for love dates in October/November.   I am sure you’ll enjoy“Antidepressant” and I look forward to working with you on ensuring the album is the success it so obviously deserves to be.