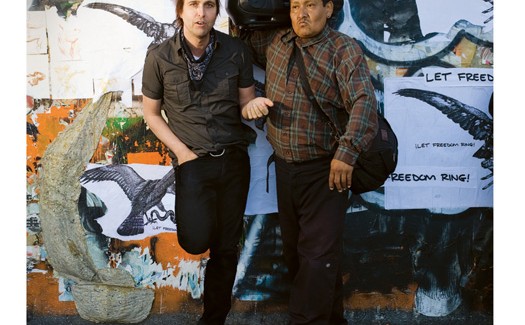 “Chuck writes, sings and plays like a tornado. Like Sonny Liston threw a punch. He is the Real Animal.” – Alejandro Escovedo

Chuck wrote these songs last summer in one long spurt in San Francisco with the window open wide during a rare heat wave. Dwight Twilley, Iggy, Thin Lizzy and the Knack were blaring out the Hi-fi.  It is as anxious a time as any for the life, death, rebirth and future of the American Dream. A concept album emerged around this dream. The songs were immediate and called for guitars and more guitars and needed to be recorded somewhere raw and energizing.  You see, to Chuck music is geography, so his trick is to wake up interested and inspired from what is around him.

The answer came, so Chuck reached out to some musicians and talked them into going down to Mexico City, The Biggest City in the World  (pop. 25 million). Recorded at Estudio 19, a state-of-the-art studio (well, circa 1958 state-of-the-art anyway) with Greg Leisz (Beck, Wilco, Emmylou Harris) co-producing. Within three days of arriving swine flu broke out and the indignity of having to wear blue surgical masks just to fit in.

Over the course of the next eight days, the band set about recording ¡Let Freedom Ring!, enduring  a poorly timed blackout, shakedowns by the Policia, and a 6.4 earthquake mid-take – Mexico City might only be 4 hours away by plane but it might as well have been on the other side of the moon.  But whilst mayhem ensued, the band buckled down to the task in hand, all set up together in a tight little bamboo lined room with the amps cranked.  Chuck played his Fender Squire, Kelly Stoltz on backing vocals, Rusty Miller (Jason Lyte’s band) played bass while Drummer Ernest « Boom » Carter turned his sticks into kindling. Carter played on Springsteen’s “Born To Run” – he promptly quit the E Street Band after they spent 6 months recording it.  The results can be heard from the Clash inspired opener to the power pop of ‘Let Freedom Ring’ and the Eddie Cochran infused ‘Good Time Crowd’.

Prophet started his wild ride back in 1984, when Green on Red, the seminal purveyors of American Rock-Roots, plucked him out of Berkeley, CA and threw him in the van for an eight-year ride, and the recording of as many albums. Since then Prophet has recorded nine amazing solo albums and toured and recorded with the likes of Lucinda Williams, Aimee Mann, Cake and Jonathan Richman. Ryan Adams, Solomon Burke and Heart have recorded his songs, along with a host of others. Prophet has never been one to rest on his laurels and ride it out.

His last album, 2007’s “Soap and Water”, was heralded as “The best work of his career” (Q**** Recommended Album) and “His most satisfying album yet.  The range of styles is impressive” (Uncut****).  Mojo declared “His Richard Thompson-indebted Telecaster squalls have subsequently decorated a litany of credible solo albums of which the latest may well be the finest”, whilst Q also voted it one of the Best Roots Albums of 2007 in their end of year poll.