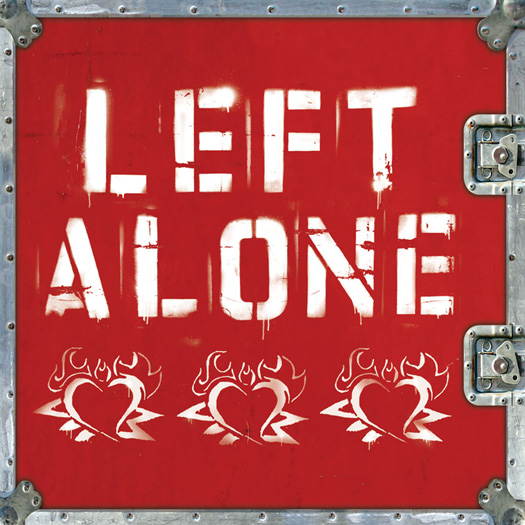 Los Angeles street-punk crew Left Alone will release their new self-titled album on April 6, via Hellcat Records. Combining three-chord punk rock with ska and just a dash of country to create a unique sound all their own, Left Alone has used their DIY ethos to move up the ranks from backyard band to Hellcat Records staple on their sophomore album.

After being welcomed into the Hellcat family in 2005, the group released their debut full-length, the ska-punk classic “Lonely Starts and Broken Hearts”, then followed it up with their diverse sophomore LP “Dead American Radio”. For the group’s third album they set their sights on a more cohesively dynamic sound.

“This record is very different from from any others we have made from the song writing, the subject matter and even how it was put together and recorded,” says singer/guitarist Elvis Cortez. “We lived in the studio from when we started pre production to the final day of mixing and that helped in many ways. With no distractions I got to concentrate more on songs from start to finish, adding different parts and taking some away to help the songs.

Fans of Left Alone’s distinct ska sound need not fear, the band hasn’t forgotten their old signature and features it on the made-for-skanking romp « Sad Story, » dealing with true life events living within the confines of gang-infested Wilmington, while “3 Bottles of Wine” represents the new dynamic of the group and the album, with an addictive sing along chorus, still in the tradition of the band’s previous fan favorites but on a new, higher level.

Radically changing the personal tones of the album is the politically charged “Bombs Away”, dealing with the rampant destabilization of Western civilization. The song is a stark departure for Cortez lyrically, and deals with subject matter usually non-existent for Left Alone.