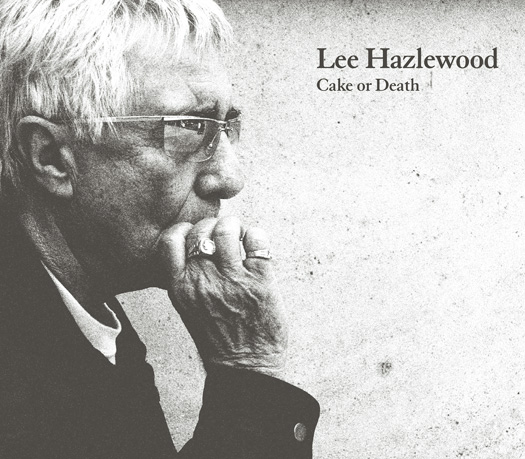 LEE HAZLEWOOD has confirmed details of his final album which will be released by the recently founded BPX1992 label on December 8th 2006. CAKE OR DEATH – a reference to HAZLEWOOD’s comic hero Eddie Izzard – is the title of what HAZLEWOOD has declared will be his swan song, thirteen songs that he wishes to bequeath to the world before he returns to the shadows out of which he was dragged in the ‘90s, following his rediscovery by an extraordinary range of contemporary artists such as Beck, Pulp, Sonic Youth and Nick Cave.

Like all of his albums, CAKE OR DEATH refuses to compromiseHAZLEWOOD’s own musical choices for any reason, and the result is an exceptional record that draws together various strands of his life in a magical, unforgettable way. Rather than pull together a self indulgent list of admirers with whom to collaborate, HAZLEWOOD has assembled a cast of musicians with whom he has previously worked, promised to work, or wanted to work. Full ofHAZLEWOOD’s trademark drama, sentiment, lyrical trickery, subtle politics (check the incredible Baghdad Knights and the wry Anthem), ribald roguery, dry wit and unforgettable melodies it’s a fabulous curtain call that, with its final song T.O.M. (The Old Man), will not leave a dry eye in the house.

CAKE OR DEATH sees HAZLEWOOD record the original, far spookier version (as much as he remembers, he jokes) of These Boots Were Made For Walkingwith Duane Eddy and Richard Bennett (Neil Diamond’s guitarist); he co-writes two songs with Al Casey, an old pal who has recorded with The Beach Boys, The Carpenters, Frank & Nancy Sinatra, Dean Martin, Duane Eddy andHAZLEWOOD himself (to name but a few); he’s joined by Scandinavia’s number one jazz singer Ann Kristin Hedmark – “I like him and he’s funny”, she jokes in her defence; lifelong friend Tommy Parsons is given the spotlight on his ownShe’s Gonna Break Some Heart – “he literally saved my life some time ago,” Lee explains, “so this is a promise given and a promise kept”; and Some Velvet Morning is reprised memorably by none other than Hazlewood’s grand daughterPhaedra Dawn Stewart – “Who says nepotism is dead?”, Lee insists. And there’s more. A trip to Berlin led to two further collaborations: Bela B, renowned actor and member of Germany’s legendary Die Ärtzte, fulfilled a lifetime’s ambition with his contribution Lee Hazlewood & The Last Song Of The Day – “there is a studio god,” Lee believes, “and his name is Bela B”. Bela in turn introduced Lee to the more secretive Lula, whose charming vocals were perfect for Nothing.

Naturally, though, at the heart of the entire album lies LEE HAZLEWOOD, displaying all of the charm and talent that has made him one of the most namechecked and influential artists in rock and roll history. It’s one hell of a swansong. The man has never done things by halves.

For over half a century, LEE HAZLEWOOD has proven himself to be one of the most ingenious, inspired and impressively stubborn sons-of-a-bitch the music industry has ever seen. His career – a word that HAZLEWOOD himself would scorn – has seen him take on almost every aspect of the music industry – a word that HAZLEWOOD himself would choke on – and come out on top every time. His music has continued to become more and more fashionable, regularly turning up in films as diverse as The Dukes Of Hazzard – which saw Jessica Simpson perform These Boots Were Made For Walking for the title track – and the arthouse flick Morvern Callar – which used Some Velvet Morning to great effect.

Alex Is On Fire