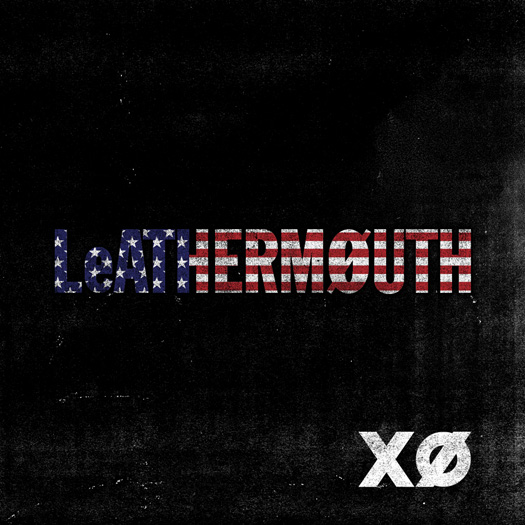 Throughout history, music has served as a society’s barometer for social and political conditions. From Bob Dylan’s folk protest anthems of the 60’s, to a the Dead Kennedys’ acerbic left-wing diatribes in the midst of the Reagan era to Rage Against The Machine’s criticism of U.S. domestic and foreign policy in the 90’s to Green Day’s stand against the U.S. administration in the 2000’s, music has always been the counter-culture’s mouthpiece for highlighting injustices. That’s why it’s no surprise that now, in shadow of one of the country’s darkest decades, LeATHERMOUTH has emerged with XO, an album that rails against the social and political offenses that are happening today.

Frank Iero is pissed. Years of anger and rage building up as the country went to hell left him unable to contain his antagonism any longer. In 2007, Iero, guitarist of the hugely popular rock band My Chemical Romance, reached his tipping point and created LeATHERMOUTH with Rob Hughes, a friend from Iero’s home state of New Jersey.
“For me LeATHERMOUTH is how I can vent about all the bullshit that I see going on in the world that makes me ill,” explains Iero. “I try to belabor the topics people want to forget exist. LeATHERMOUTH is where I can vomit out all the aggression that has built up inside. After recording or playing a LM show I feel empty of all that hatred that’s been bottled up, it’s a pleasant, cathartic experience. I am embarrassed by my emotions and originally wanted to keep LeATHERMOUTH anonymous…but fuck it, none of us are perfect, the world is going to shit, and someone has to say it.”

Tired of the misdirected blame in school shootings, overmedicating kids and nefarious politicians among other things, Iero viciously explodes with pent up frustration on XO, spewing his aggression out in a rapid fire succession. XO is a call to action with thick speeding rock riffs inciting listeners with brutal hostility, inculcating a sense of urgency with the controversial track “Catch Me If you Can,” which likens the NYPD to Jack the Ripper, “Sunsets Are For Muggings,” about being robbed of your childhood by drugs and therapy and “5th Period Massacre,” which points the finger at bullying students as the cause of a school shooting.

“I would say this record is about trying to wake people up to what is happening right in front of their eyes,” Iero continues. “We are all trying our hardest to pretend bad things don’t happen to good people, and that there is some higher power looking over us…but it’s bullshit. Stop covering your children’s eyes. Everything is fucked, and pretending it’s not isn’t making things any better. I’m tired of people praying for a change when it’s up to them to get off their asses and make a change.”

With the looming promises of change seemingly ahead for the country, LeATHERMOUTH remains steadfast to reminding folks of how we as a society got to this point. RATM singer Zack De La Rocha once said that “anger is a gift.” If so then Frank Iero is seriously gifted.