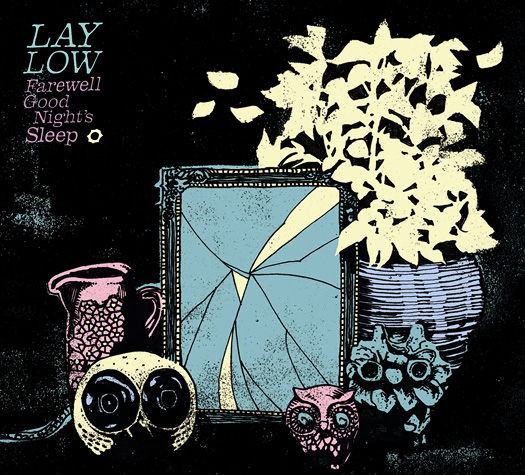 Lay Low is the alter ego of singer-songwriter Lovisa Elisabet Sigrunardottir, who was born in London in 1982 to a Sri Lankan father and Icelandic mother, with the family relocating to Reykjavik when she was a small child. She took piano lessons at a young age and started playing bass and guitar in her teens, performing with several local acts before joining the experimental rock band Benny Crespo’s Gang and adding keyboards and synthesizers….and her voice….to her musical armoury.

Lay Low evolved in early 2006, after Lovisa was contacted by a local label showing an interest in a raw demo she had placed on Myspace that combined elements of blues, folk and country and twisted them into a fascinating new shape. Just a few short months after being discovered she had recorded and released her debut album, ‘Please Don’t Hate Me’, which topped the Icelandic chart and became the bestselling original album in the country that year, getting nominated for four Icelandic Music Awards (winning three) in the process.

Demonstrating a musical maturity beyond her years, ‘Please Don’t Hate Me’ was an impressive debut, with Lovisa’s intoxicating new take on classic Americana sounds attracting much praise and her authentic and compelling live performances standing up well to the recorded versions of her songs.

Following the speedy success of her debut, Lovisa refused to rest on her laurels, recording covers of two well-known Icelandic songs for a local hit movie (‘Bruðguminn’, directed by Baltasar Kormakur) and taking on the role of music director for the Pulitzer Prize play ‘How I Learned to Drive’, (written by Paula Vogel), for which she not only wrote the music but also performed it on-stage to sell out crowds and great reviews. The music from the play was released in Iceland in early 2008 and included five original Lay Low tracks in Icelandic plus eight Dolly Parton covers, all in a distinctive Lay Low style. The record was an instant hit and Lovisa again found herself nominated for a prize, this time for an Icelandic Theatre Award. Despite several other musical luminaries being nominated (including Nick Cave and Warren Ellis), Lay Low won the award.

Lovisa also began sewing the seeds of an international career in 2007, playing shows in the UK and the US and performing at several industry conventions in mainland Europe. While in the US, Lucinda Williams saw her play two shows in LA and began talking up Lay Low as one of the best new artists she had seen in years.

The early part of 2008 saw Lay Low begin planning her much anticipated new album, visiting London to meet up and play with producer Liam Watson and a crack team of musicians at his famed Toe Rag Studios. Things clicked immediately between Lovisa and Liam and a full recording session was scheduled for the summer. To prepare for the recordings Lovisa spent some time in the Icelandic countryside, first staying on the remote island of Hrisey in the far north of the country and then travelling to the extreme east to the tiny village of Borgarfjordur Eystri.

Recorded and produced by Liam Watson (White Stripes, Pete Molinari, Holly Golightly), ‘Farewell Good Night’s Sleep’  is a superlative sophomore album that reinvents the country music wheel for a modern audience. Recorded between July and September 2008, it features high calibre musicians such as Carwyn Ellis, Ed Turner, Rupert Brown, Matt Radford, Jason Wilson and BJ Cole. Liam Watson himself comments that “working with Lovisa was a great experience. I really enjoyed working with a girl of Lovisa’s age that enjoys good country music, the kind that I like – sincere, melodic and lush. Lovisa has a very special and unique voice and is coming up with the kind of material I don’t hear from anyone else. Iceland’s top female country artist will surely become a favourite the world over.”

When asked about influences for the new album, Lovisa talks a lot about the honky tonk era from 1950–1960 as well as specific artists who have influenced her – Patsy Cline, Dolly Parton, Ernest Tubb, Kitty Wells, Lefty Frizzell, Hank Williams Sr., Red Foley, Loretta Lynn, Hank Lochlin, Skeeter Davis and The Carter Family. In general she listens to a great deal of country, roots and old gospel, together with a lot of new indie bands.

As for the album title, Lovisa states that « I was really stressed making the album and felt pressured since ‘Please Don’t Hate Me’ had been doing so well. I didn’t sleep much when I was working on it and that’s why I thought it was appropriate that I should call it ‘Farewell Good Night’s Sleep’, since that’s how it was. »

The music team at iTunes in the US have already picked up on the new album, tipping Lay Low as one of the best discoveries of 2008, while the opening song on the record (the 6 minute country-burlesque ‘I Forget It’s There’) has been getting much daytime airplay from the influential LA radio station KCRW.

Lay Low will tour mainland Europe as the main support for Emiliana Torrini for three weeks from late January 2009, and will play the Hoxton Bar and Kitchen, London on 12th March immediately following the release of ‘Farewell Good Night’s Sleep’ on March 9th, including a support slot to Emiliana Torrini at ULU on March 13th.