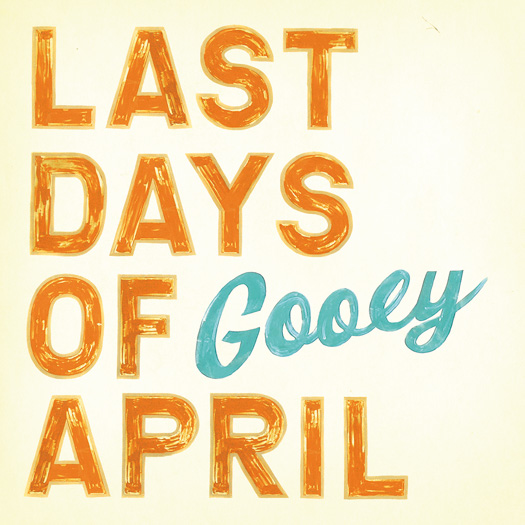 If modern music was a living organism, its arteries would be clogged by today’s surplus of jaded, apathetic hipster acts – and Last Days of April would be a life-saving jolt to the chest. For over a decade, LDOA brainchild Karl Larsson has brushed aside prevailing trends to go with his gut, helming his band’s evolution from a convulsive hardcore outfit (as on their self-titled 1997 debut) to an avant-garde alt rock phenomenon (2000’s Angel Youth) to a high-octane indie pop powerhouse (2007’s Might As Well Live). Throughout the transitions, one thing’s remained constant in the Stockholm-based group’s oeuvre: a big, beating heart.

Yes, music with a goddamn pulse. Rapturous guitar hooks that send electric currents through your veins; cards-on-the-table lyrics that slice right through the superego; cathartic, hair-raising choruses that grab you by the collar and shake you back to life. The kind of songs that ignite the airwaves (as they’ve done on hundreds of major radio and television stations around the globe) and leave audiences slack-jawed, fomented and goose bump-ridden – a common occurrence on the band’s countless European headline tours, festival gigs (Rock Am Ring, Rock Im Park, Hurricane, Hultsfred, etc.) and jaunts in Australia, the US and Japan, playing alongside big guns like Chris Cornell, Guided By Voices, The Lemonheads, Tegan & Sara, The Ataris , At The Drive-In and The Promise Ring.

So you hear that LDOA’s first album in three years is named Gooey and you scoff, ‘What is this syrupy, sentimental rubbish?’ But then you press play. “No Time For Dreams” creeps up on you with the gentle hum of a synthesizer, a pulsating bass line, and Larsson, in a bold voice wavering with unbridled emotion, asking: “When all is too late, when all is said and done/When my head is bald and my legs won’t run/Will I think of all I accomplished or all I could have done?” Suddenly, amid a stirring crescendo of fluttering pianos, staccato drums and spine-tingling guitar licks, the fleeting nature
of life smacks you square in the face and you’re overcome with a bittersweet yearning for lost time. Feeling a little choked up? Don’t worry; it happens to the best of us.

Recorded by Larsson and engineer Frans Hägglund at three different studios – Riddarborgen, Mission Hall and Karl’s old house – Gooey manages to dial down Might As Well Live’s cranked amps for a gentler vibe while reintroducing the lush, eclectic instrumentation from LDOA’s days of yore. From the organ-backed, acoustic roots rock chug of “Forget About It” to the banjo-and-Korg-MonoPoly-addled guitar pop shimmer of “Why So Hasty?” this is the band at its most delicately organic and melodically blissful – thanks in part to an ace mixing job by Grammy winning producer Pelle Gunnerfeldt (Refused, The Hives), who manages to subtly weave the disc’s dense orchestrations into the glimmering atmospheres of these deceptively breezy tunes. In such subdued environs, Larsson’s blood-warm vocals have more emotional resonance than ever, tackling all-consuming infatuation (“I Can’t Control It”) and desolating heartsickness (“Heart”) with straightforward-yet-savage honesty. But he’s got no qualms sharing the limelight; The Lemonheads’ Evan Dando sings the gravelly lead on the reverb-laden “All The Same,” while Tegan Quin (of Tegan & Sara) joins Larsson for an intimate duet over a gripping backdrop of omnichords, pianos, farfisas and cymbals on “If (Don’t Ever Blame Yourself).”

In essence, Gooey does what every Last Days Of April album sets out to do: it fills you with serene melancholy and agonizing euphoria. It accesses those tender – and, well, gooey – caverns of the heart that are painful when touched, but it reveals beauty amid the anguish; just as the band will do when they play Scandinavian dates from December to January before embarking on a full-fledged European tour in late January. The album’s first single is “America,” an infectious, pastoral pop gem that ostensibly sounds like it could be Larsson’s tear-soaked goodbye to the States after playing the
SXSW festival last March. But listen closely to those wistful melodies and nostalgic chords and you’ll find a deeper scar lingering beneath the surface – a yearning for a place, time or person you ache to go back to again but simply can’t. That’s the thing about LDOA’s music: everyone hears in it what hits them the hardest.