SEND ME AN ANGEL DOWN 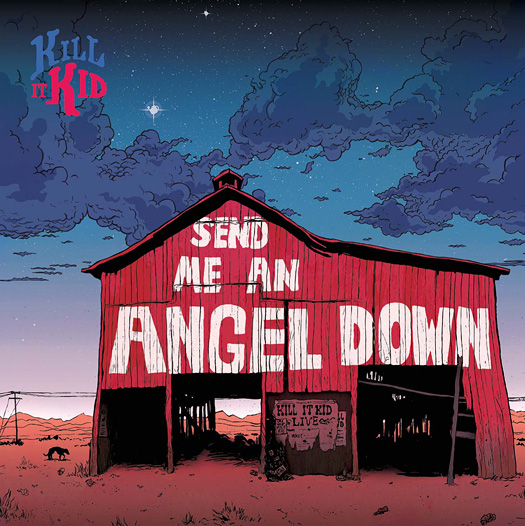 Formed for little over a year, Kill It Kid is a storming proposition. Fronted by two astounding vocalists (Chris Turpin and Stephanie Ward) and buttressed with strings, keys and slide guitar, Kill It Kid blend delta blues, folk and contemporary roots and indie, recalling the likes of Mumford & Sons or Bon Iver.  ‘Send Me an Angel Down’ is their debut single for One Little Indian Records, and is a precursor to their debut album, due out in early autumn.  It’s an indie-folk novella, one that sounds quite unlike anything else at the moment.

Kill It Kid draw similarities to Tom Waits, Anthony Hegarty and The Raconteurs at times, but as a whole the band sound very much their own – an impassioned, adventurous slant on blues and dark pop through powerful songs, gorgeous two-part vocals and a penchant for down-home storytelling.  Kill It Kid formed through old musical friends and projects at Bath Spa University.  Vocalist Chris Turpin began performing solo, occasionally joined by drummer Marc Jones and bassist Adam Timmins. Through their social circles at Uni, the band formed in February 2008, debuting in Bath to rapturous acclaim.  This prompted visiting lecturer John Parish (PJ Harvey, The Eels) to select Kill It Kid as a band to record with, based on the recommendation of Chris’s college tutor.

The new single and subsequent album is produced by Ryan Hadlock (Foo Fighters, Johnny Flynn, The Strokes, The Gossip) and was recorded in Seattle, at the same studio Fleet Foxes laid down their debut.   Already they have supported Ipso Facto, The Virgins, Phoebe Killdear from Nouvelle Vague and Pete and the Pirates.

A full UK tour will support the single release, with festival dates to follow in the summer.

“With soul-searching lyrics relayed in Chris Turpin’s veritable roar of a voice that comes across a four-in-the-morning, whiskey-soaked cousin of Antony Hegarty’s perfectly complementing the seductive prowl of Stephanie Ward’s, and rip-roaring tunes such as ‘Heaven Never Seemed So Close’ at their disposal, these five from Bath exemplify a steely passion and musical flair far beyond their years.”

“Theirs is a vibrant blend of The White Stripes, barn dances and the Stephanne Grappelli – like fiddle-frenzy jazz/blues”

KILL IT KID IS