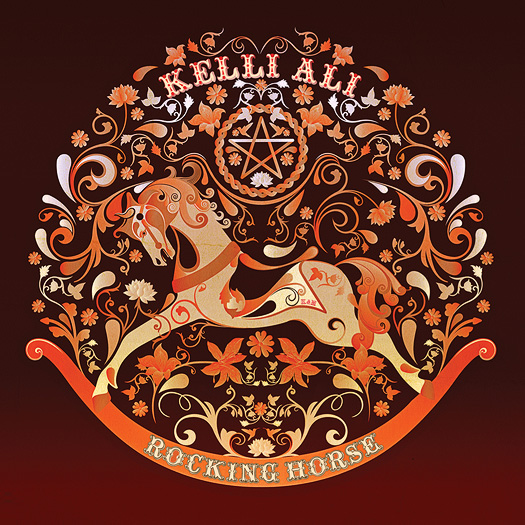 Rocking Horse is a stark abandonment of an electronic past, but this is how itpenetrates: Abandoning style for substance, crafting hauntingly ethereal mood pieces adorned by Richter’s richly melodic, textured production skills. This music is timeless, but only is such that time is irrelevant. Medieval and baroque sensibilities playfully combine with dark nu-folk to conjure a haunting tapestry of powerful, modern madrigals.

Rocking Horse is influenced by Kelli’s nomadic past, wherein she travelled across California and Mexico after the release of her last solo album, Psychic Catin 2004. ‘Urique’ was written in a sacred canyon in Mexico after hitching a ride with a meth-addicted truck driver, whilst the title track emerged after a journey through the California wilderness.

Soft spoken as it is powerful, dreamy as it is melancholic and enchanting as it is haunting, Rocking Horse marks the beginning of a new Kelli Ali, one influenced by her loves, loses and life experience.

“Stunning – It is immense.  A sprawling lament to lost innocence” WOUND MAGAZINE

Kelli Ali was the lead singer of the Sneaker Pimps for their platinum-selling‘Becoming X’ album.

The band asked Kelli to leave in 1996 and she began focusing on writing her debut solo album Tiger Mouth, collaborations and guest appearances.  Among others, she worked with Marilyn Manson, Brian Ferry, Bootsy Collins,Linkin Park and Paul Oakenfold.

Tiger Mouth was released in 2002 on One Little Indian.  It featured John Densmore of The Doors.

The album was finished in late 2007, wherein Max Richter was asked to produce it, based on his work with Vashti Bunyan’s ‘Look Aftering’.

Recorded between March 2008 – May 2008 in Cava Studio in Glasgow and Castle Sound Studios Pencaitland.

Cover illustration by Steven Wilson. It symbolizes the paradox of life, lost innocence and the pendulum motion of light and dark influences over the human condition.

“Stunning – It is immense.  A sprawling lament to lost innocence” – WOUND MAGAZINE