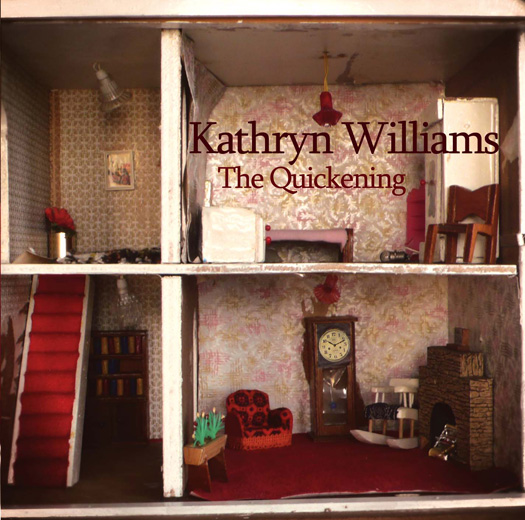 Kathryn Williams enters the new millennium with the release of her eighth studio album ‘The Quickening’ on February 22nd next year, her first for new label One Little Indian.

The new record was recorded at Bryn Derwen studio in North Wales ‘in four days, all live, three takes maximum’ Kathryn explained to Mojo magazine earlier this year, and contains some of her sharpest, most mesmerising song writing to date, including a couple of co-writes with longstanding collaborator, guitarist David Scott. ‘It has a mood’ she suggests, ‘a slightly sinister palette with lyrics that are raw. I see myself in these songs a lot, whereas before I invented characters.’ It is produced by Kathryn and Kate St. John and mixed by Kathryn and David Wrench.

The recording set-up of ‘The Quickening’ lends the record an urgency and immediacy borne directly out of the musicians playing off each other – none of whom had heard the songs prior to the recording. Says Kathryn ‘When I listen to the songs now, I can see that room in Wales, remember what each take felt like, with my heart in my mouth, wanting to get to the end without a fuck up!’

Of the songs Kathryn says ‘I always wonder if people get the same pictures in their head as me from the lyrics and music. I see the songs as shapes when I sing them, as journeys through pictures or film’. Album opener ‘50 White Lines’ is a great example, Kathryn re-imagining the long journeys on tour as a Bonnie & Clyde style escapade; in the background a male voice ‘counts’ the road markings or lights as they flash by in the protagonist’s flight from city to city, town to town.

‘It’s a little world of rules I couldn’t write down but I work to them and around them, and I know my way around that world,’ says Kathryn of her song writing itself, ‘I’m forever scared that the way of making the songs will leave me. But in the end, that is part of what drives me.’

For sometime Mercury nominee Kathryn, ‘The Quickening’ marks the beginning of a new relationship with One Little Indian records in a deal that will also see the release of archive material, a children’s record made with Anna Critchley, and the debut by Kathryn’s other sideline The Ish Inventors – a work in progress that is being made with Nev Clay, a songwriter and poet Kathryn has worked with as an artist in residence.