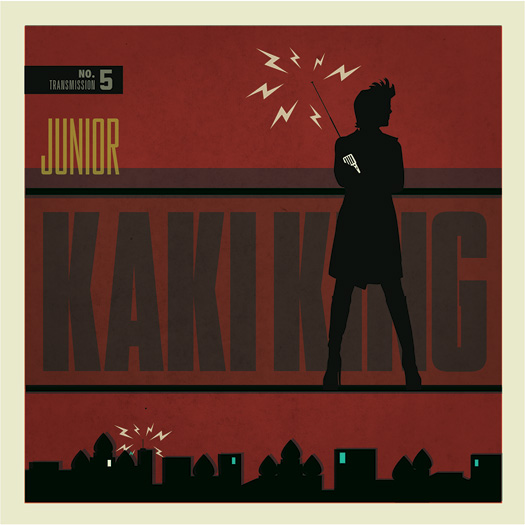 While Kaki King is unlikely to give up her job as a singer and guitarist extraordinaire, she wouldn’t mind being a secret agent for a day at some shadowy foreign intelligence agency. A fan of Cold War history, the New York-based artist finds espionage work appealing for the opportunity to don a disguise and speak in a foreign accent. More importantly, she likes the idea of actually convincing somebody that she is somebody else.

« The Hollywood version would be ‘I’d be really great with explosives!' » King explains. « But that’s not what spies did. They collected information, and they way they collected information was being completely fluent in another language and culture. They were able to assume an entirely different identity. That’s what I want: to have the swiftness in mind, to be able to react in a situation that I haven’t grown up in, that I haven’t experienced first hand. »

The espionage theme, particularly the idea of living a double life, was the basis for « The Betrayer, » a kick-in-the-gut rocker King wrote for her brand-new, stunning album Junior. And like a tantalizing spy novel that’s full of surprises, Junior delivers twists-and-turns: lyrically from exuberance and anger to heartbreaking melancholy; and sonically from experimental pieces to accessible pop. While there is some of the dazzling musicianship King has been renowned for, Junior showcases her further maturation as a well-rounded artist that defies categorization and expectations.

« I never really made records for other people, » she says. « I’ve never been able to, though if I could I’d be a much richer person. For example there’s none of the « guitar tapping » that I’m known for. There not a single bit of it on the record except for a half a second on ‘The Hoopers of Hudspeth.' »

As with her previous album, 2008’s Dreaming of Revenge, Junior was produced by Malcolm Burn (Patti Smith, Emmylou Harris) and recorded at his studio in Kingston, New York. But in contrast to that record, which was marked by deep textures and layers as well as unusual instrumentation, Junior was specifically made with only three musicians in mind—in this case, King, multi-instrumentalist Dan Brantigan and drummer Jordan Perlson. The result was something more direct. « Prior to this I would have written a lot in the studio and played all the instruments myself, » King says. « This time, I really leaned on Dan and Jordan to help shape the songs and help me get the record written. »

The nearly-D.I.Y. aesthetic employed by King can be found on a couple of Junior’s tracks starting with the album’s punkish « Falling Day » and the noisy « Death Head. » « I was dragging this little ukelele around with me, » she says of the former song. « I tuned it weird and I came up with this one riff. The lyrics are basically nonsense. It’s a kind of rumination on a weird dream I had and imagery from that. It’s also got all these strange sounds that Dan came up with.  »

Longtime fans may be surprised to hear a different side of King with the dance rock of « Spit It Back In My Mouth. » « I really wanted that to be my Cure song, » she says. « Like how the Cure would write these really happy, jangly songs and the lyrics would be utterly depressing. When I came up with that little groove, I thought this is way too happy, so I changed it to make people depressed. »

King’s mesmerizing guitar playing continues through Junior with a few instrumental pieces, including the electrifying number « My Nerves That Committed Suicide. » « I found a tuning on the guitar, » King says of that track, « and I was writing a little theme and a little melody. All of a sudden I thought, ‘Why don’t we do this?’ and it really took off. Part of it is ear candy and a part of it is emotive air candy. You just go with that anthemic feeling and it kind of wins every time. »

The rawest song on Junior in terms of King’s passionate singing and wrenching lyrics is the folkish ballad « Sunnyside, » which is about the end of a relationship. « It happened very close to the time I was making the record, » the artist recalls. « It’s a very personal story about something that I went through with another person. Every reference to every lyric is true to life. I’m hoping there’s something universal in that song that someone’s gonna listen and think ‘Wow, I can relate to that,’ because I don’t want it to by my pity party. »

The highlight of Junior is the aforementioned cut, « The Betrayer, » a tension-filled song inspired by the 2007 book Agent Zig Zag by Ben McIntyre. It is based on the true story of double agent Eddie Chapman, an Englishman who first spied for the Nazis during World War II and then later switched over to the British. « I was just thinking about what it took to be able to do that, » King says, « [in] how smart you had to be, and how you really had to leave your entire life behind. » Yet « The Betrayer » could also be interpreted other than being a song about espionage. « It’s always a love story no matter what, really, » she adds. « Who am I to say that it’s not? »

Junior is Kaki King’s first album for this new decade, following a previous 10 year-period that has brought nothing but critical acclaim and fan admiration for the Atlanta, Georgia native. It was a decade that saw the release of her 2003 Velour Recordings debut album Everybody Loves You, followed by Legs To Make Us Longer (2004), …Until We Felt Red (2006) and Dreaming of Revenge (2008). Named a ‘Guitar God’ by Rolling Stone (making her the first female musician to earn that recognition), King has toured worldwide and made the rounds on the late-night talk shows including David Letterman and Conan O’Brien.

Following her Golden Globe-nominated score for the 2007 Sean Penn-directed film Into the Wild, King recorded with The Mountain Goats for 2008’s Black Pear Tree EP. And not to be outdone, the guitarist has recently collaborated with uber-producer Timbaland to produce a song featuring Miley Cyrus.

Clearly Junior marks a new musical chapter for the artist, something that is hinted at with its rather modest-sounding title. « I felt like I was doing something for the first time, » King says, « because I was trying totally different things as far as my [album-making] process. I felt like a little kid or a novice. It made me feel that I was starting something again and I felt young. »
www.kakiking.com