» THE LIVING AND THE DEAD » 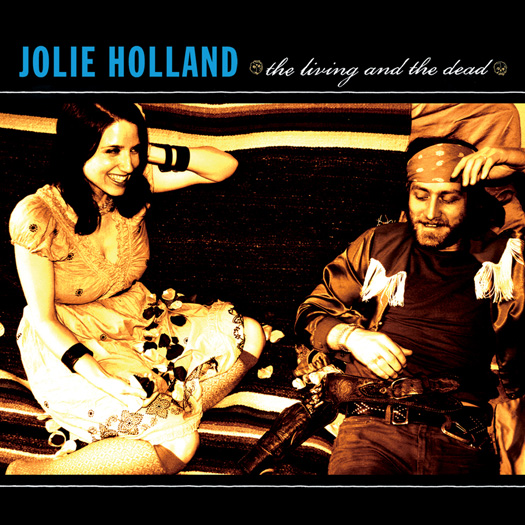 ‘the Living & the Dead’ is a work between worlds, of moving on and finding something
new, of missed chances, and promises on distant horizons. From the past (the haunting simplicity of « Love Henry, »which Bob Dylan tells us pre-dates the Bible) to the future (the
stunning emotional complexity of her song, »The Future »), theTexas-bred singer-songwriter navigates a new rock approach that is built upon the folk, blues and jazz spectors that
populated her three acclaimed previous albums.

Holland composed these songs in her old home town of San Francisco, as well as on the road across North America and Europe. A few were born during a writing retreat in New Zealand. Arising out of her life stories, and from the rich estuaries of the mysterious tales of other adventurers, her songs are grounded by true experience.

‘the Living and the Dead’ is an exhilarating ride with a higher voltage than the previous albums, music that had already left fans and critics at a loss to describe her singular vision as performer and writer. Holland worked with co-producer Shahzad Ismaily (Bonnie ‘Prince’ Billy, Two Foot Yard, Marc Ribot’s Ceramic Dog) in sessions both in Brooklyn, New York and Portland, Oregon. With contributions from guitar maestros Marc Ribot (who played with Tom Waits and Elvis Costello) and M. Ward (who also produced one song and helped shape the sound of others) and drummer Rachel Blumberg (M. Ward, Bright Eyes,
the Decemberists), Holland has created an album that serves as a career statement. Holland’s voice is the same beautiful instrument, which has never before sounded so
confident, relaxed or emotive.

With 2003’s Catalpa (essentially home-made demos released due to popular interest and then nominated for the prestigious Short List Music Prize by Tom Waits), 2004’s Escondida and 2006’s Springtime Can Kill You (which Rolling Stone said « feels better than a good cry »), she evolved a sound that existed in its own time, as if it could have been recorded anywhere between God knows when and yesterday. the Living & the Dead shares that same quality, but its timelessness is rooted in the present. Take Holland’s description of the
song “Your Big Hands”:

« It’s just terribly naïve—it’s the kind of song Daniel Johnston made me feel brave enough to write, » she says. « It starts out with these beautiful dirty guitar chords from M Ward, almost like a Rolling Stones song…the overall feel of this song owes a debt to Waits’ version of rock ala ‘Downtown Train’…then, in the middle of the song, all that has disappeared…you feel as though you’re wandering around in the woods–there are owls and shooting stars…but then the song burns out with a mess of distorted guitars.”

In many ways, this album is a chronicle of her own journey. The driven « Corrido Por Buddy » (about a friend who sunk so far into addiction that Holland didn’t recognize him on the street) is both character study and self-examination/recrimination – a sense magnified
for the singer by not just one, but two instances of eerily identical poltergeist phenomena in the studios while the band was recording « …Buddy. » The phenomena were witnessed by three band members, and occurred both in Portland and New York, during the song’s production.

« The Future » is a presentation of beautiful poetry which arose out of personal misery – « When I wrote that I was really kind of crying and holding on to the piano—it’s about the
hell of breaking up and moving out at the same time.”

« Palmyra » is a prayer for the broken-hearted and traumatized, both individuals and communities. The first half paints a picture a love-lorn traveler pulling herself back together after a disastrous affair. The second half is lovingly and respectfully dedicated to the hard-pressed people of New Orleans’ Ninth Ward, hallowed estuary of some of the finest
music the world has ever witnessed.

Upon hearing the completed album, Holland says, « I hear a lot of interesting connections between the songs that I didn’t premeditate. ‘Sweet Loving Man,’ (a very modern love song, based on South Louisiana dance music) is sitting right next to ‘Love Henry’ (which is ancient as hell.) The first song is about a lover who sets out to attempt a
life free from heart-break, by any means necessary. And the second is a twisted tale of a scheming rich woman who kills her lover in a fit of jealousy. It’s like putting two opposite
colors next to each other on a painting.”

The perceived space between ancient and modern seems to fade away. If something speaks to you and is meaningful, dates can become irrelevant. In that way, Holland’s work has always been characterized as timeless. This album lives and breathes through memories of the past via reflection and resurrection, and grows into the present tense. the Living and the Dead reflects those timeless elements that make Holland’s songwriting so powerful. It’s multi-faceted, emotionally rich, and a continuation of one songwriter’s existence within her own worlds and outside others. Enjoy Yourself.