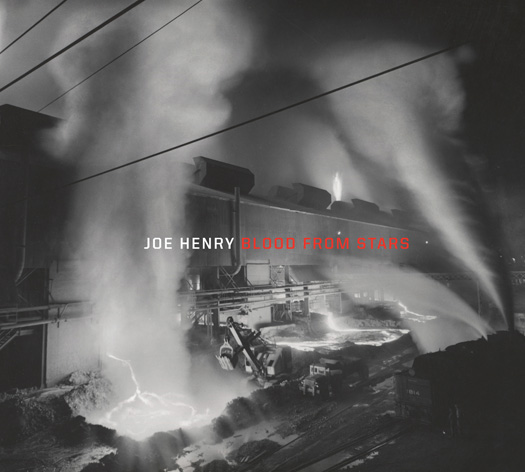 For more than two decades as a solo artist and Grammy-winning producer, Joe
Henry has worked with some of the most celebrated names in music, including Ornette Coleman, Elvis Costello, Allen Toussaint, T-Bone Burnett, Don Byron, Solomon Burke, Brad Mehldau, Madonna, and Ani DiFranco.

On Blood from Stars, his remarkable and sprawling new album, Henry has the unprecedented pleasure of introducing the world to a new talent, a young saxophonist by the name of Levon Henry. “I was tempted to put him on my last record, Civilians (2007),” Henry explains of his seventeen-year-old son. “He wasn’t quite ready for that –and neither was I. But in the last two years, he’s found a voice and begun to speak in wildly expansive and complete sentences. It wasn’t a matter of me thinking it would be cute to put him on a record. He was just the musician I most wanted to hear in that chair.”

It doesn’t take long to understand why. An award-winning player in his own right – he’s won two soloist awards at the Monterey Jazz Festival’s “Next Generation” competitions – Levon lends his velvety tone and lyrical phrasing to songs such as “Truce,” and the instrumental “Over Her Shoulder,” which his father wrote as a vehicle for him. Nowhere is his playing more incandescent than on “Stars.” His soprano sax leaps and darts with a melodic agility and a terse beauty.

The album was recorded in Henry’s own studio, which is located in the basement of the historic Garfield Home in South Pasadena, where Henry and his family now live. (An historical landmark, it was built in 1904 for the President’s widow.) This made Levon’s contributions that much easier. “Sometimes we had to do overdubs with him as opposed to recording him live, because he was at school,” Henry recalls. “But then he’d come home, finish his homework, and come downstairs to join the festivities. It was lovely and strange, and yet it felt perfectly natural to direct him.”

But like any Joe Henry record, Blood from Stars is a collaboration, in the deepest sense of the word. Henry has assembled a remarkable cast of players, from his longtime rhythm section (ace percussionist Jay Bellerose, bassist David Piltch, and keyboardist Patrick Warren), to newcomers like Keefus Ciancia, whose murmuring samples lend the proceedings a dreamy, fragmented and cinematic feel.

The sultry coronet riffs that drive “The Man I Keep Hid” and “Bellwether” come courtesy of guitarist Marc Ribot. “Not many people know Marc plays coronet,” Henry observes, “and he doesn’t do it a lot. He can do anything on guitar, of course, but it was sometimes much more to the point of my purposes that his deep musicality be articulated in a more primitive way. He brings a kind of raw, smeared-lipstick romanticism to whatever he does.” Ribot’s barbed electric guitar is also on display throughout, as are his flamenco sketches on the torch ballad “This Is My Favorite Cage.”

And, of course, this being a Joe Henry production, there are all many unexpected turns in the road. He’s recruited the brilliant young jazz pianist Jason Moran to deliver the piercing, hymn-like piano work of “Prelude: Light No Lamp When the Sun Comes Down,” which opens the album like an overture. Likewise, when the time came to light a fire under the track “Death to the Storm,” Joe called upon the Chocolate Genius himself, vocalist Marc Anthony Thompson, whose soulful swagger turns the track’s chorus into an ominous house party.

Critics have long since given up trying to label Henry’s sound. His music spans far too many genres. But the dominant sound on this record stems from blues tonality. Tracks such as “Bellwether” and “All Blues Hail Mary” begin as traditional blues forms (“I observed that structure like it was sonnet”), only to swell into ravishing epics that jump the rails to incorporate folky jazz and bent Sinatra-esque washes of sampled strings. “All the blues sing of love and death and you,” Henry whispers in the latter, “As chances yet to take.”

The line is typical of his lyrical touch. “I’ve read that I’m supposed to be a very literary songwriter, someone whose songs are short stories set to music. But I can’t imagine what where that comes from. I’m not linear…not remotely a reliable narrator,” he says. “All I’m trying to do is put a light on something; and sometimes the clearest path is not a straight one.”

So this is what you can expect from Joe Henry’s eleventh studio LP -a tour de force- in addition to all the desperate beauty and hypnotic vamping, the lush arrangements and seductive songlines: the sudden and thrilling illumination of places you’ve never been, but are somehow intimately familiar.