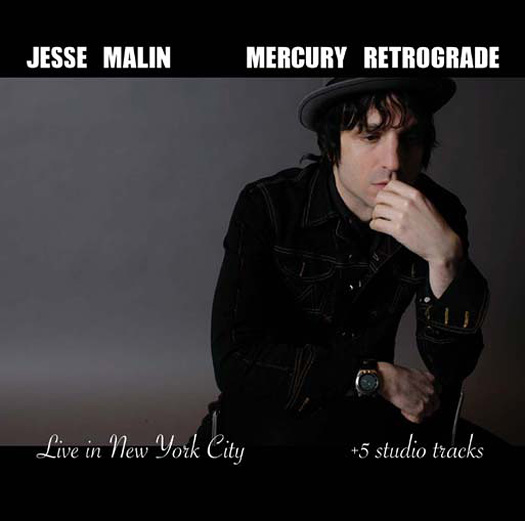 Jesse Malin is set to release his eponymous live album, Mercury Retrogradeon November 10th via One Little Indian. The record was recorded acoustically over two nights at the Mercury Lounge in NYC in December 2007, capturing Malin at his best, both as a storyteller and as a songwriter.  It’s a record dedicated to the core of the songs, a retrospective of sorts that delves into the heart of his history to uncover, in the flesh, Jesse Malin at his best – stripped down, loquacious and intensely evocative.  In addition, the release includes 5 previously unreleased studio tracks, featuring b-sides from Glitter in the Gutterand other rarities.

« Leaving the house and going out to see live shows is a ritual for me – a physical experience that I can’t get at home just listening to a studio album. For my first ever-live album, I wanted to record the songs differently by going back to the original essence of how they were written, on an acoustic guitar. Over the past couple years I’ve been touring with a full band, but for this album, I wanted to go back to the way it was in the beginning and just do a stripped down acoustic set.”

« These recordings were made over two nights at the Mercury Lounge in New York City a week before Christmas 2007.  I figured I should return to one of the spots I played when I was starting out. Talking between songs or doing « bits » as I call them is something I did early on to kill time while I was tuning my guitar as I toured solo.  These true stories evolved into a spoken word aspect of my live shows that hasn’t been represented on any of my studio releases. Yackety yack. » – Jesse Malin