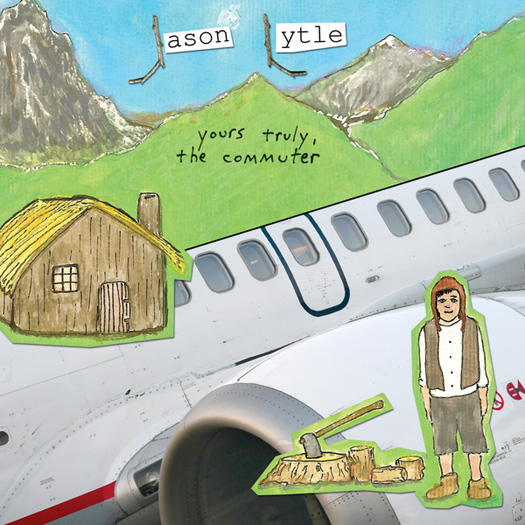 If Jason Lytle learned anything from nearly 15 years at the helm of Grandaddy – the Modesto, California quintet whose celebrated five-album run started as a project in Lytle’s bedroom and took him around the world – it’s that he’s just not cut out to be a 21st century pop star. There were triumphs, no doubt — they toured the world, created a technological dystopian classic with 2000’s The Sophtware Slump, shared stages with Elliott Smith, and talked shop with David Bowie when he turned up at their shows. But Lytle was a poor fit for life in a breakthrough indie rock franchise. Touring was endured more than enjoyed, and he often found himself wishing he was biking or skateboarding, staring into hiking magazines while the band was trapped in the cycle of sitting on cigarette stained couches, filling sweaty clubs, and hauling ass to a new city every night. By the time he was writing 2006’s Just Like the Fambly Cat, he knew it was over, that the machine had simply lost its momentum, its gears too clogged with years of frustration, substance abuse, and diminishing returns. His choice became clear: he needed to go somewhere else and start over completely. He needed to go to Montana.

“When I was living in Modesto, I had fallen into a number of ruts,” he says from his home in Bozeman, the fifth-largest city in the sparsely populated state. “I pulled myself away from everything that I knew too well or had become too comfortable with. I had to shake things up, in my head and in my surroundings. And being within immediate proximity of the mountains and lots of remote back country, I tend to figure things out. That’s something that I’d definitely lost the ability to do. There are a lot less negative distractions. There was a sketchy story or a ghost on every corner in Modesto for me. I was really allowed to reinvent a chunk of myself living here in a good way,” he says plainly. “I’ve gotten rid of a lot of the bad stuff.”

Despite having watched Grandaddy’s next-big-thing status come and go, he had never lost his love of recording and songwriting; he just lost the sense of wonder he’d felt as a child while dreaming of creating songs to accompany his mother’s vacuum cleaner. He limped into Montana with his confidence at an all-time low. Free of the contractual obligations that kept him and his bandmates just above the poverty line, and the ever-present feeling that he needed to hurry up and create his next Grandaddy opus before everyone starved, he now had the luxury of taking his time. He didn’t know who would be interested in his new set of songs or if a label would even want to release them, but he kept working anyway, completing most of the album during a brutal Montana winter when mountains of snow kept him indoors. After years of worrying about maintaining the delicate balance that would keep the Grandaddy ship afloat, he again felt the simple pleasure of getting lost in his studio. Once the snow thawed, he had his first solo album, Yours Truly, the Commuter.

“The title of the album comes from where I’ll go into the studio for a few days, and when I come back out, it’s not always easy to transition back to this world,” he explains. “I’ll go on these daytrips, and I’ll surface back into town as the sun is coming down, and I’m like ‘Whoa, I have to go home and deal with other humans and talk and look at the stack of bills on the table and check emails and decide what I’m going to have for dinner and stare at Bret Michaels on TV.’ It’s like ‘Fuck! This is really hard.’ There’s really this state of meditation that I hit, not in a hippy dippy way, but something that I don’t want to lose.”
That’s not to say that the album only commutes back and forth between smiles and safe-and-found sentiments. In fact, it’s downright conflicted. Like much of the Grandaddy canon, these are songs that seem trapped in the purgatory of wanting to move forward but feeling drawn to an unreachable past. There is heartbreak mingled with hope, with “I Am Lost (And the Moment Cannot Last)” wrapped in the confusion that accompanies leaving everything you’ve ever known and “Brand New Sun” capturing the bliss of punching the reset button on your life. There are admissions that the new path can make for lonely traveling on “Rollin’ Home Alone” and that your memories will follow you wherever you go on “Ghost of My Old Dog.” But, ultimately, there’s a stubborn recognition that after years of feeling like a stranger in your own house, your only choice is to build a new one. “’I may be limping,’” he admits on the title track. “’But I’m coming home.’”
The meticulously arranged electronic textures and emotionally raw performances serve as mementos, from solemn piano ballads (“Flying Thru Canyons”) to rollicking rejoinders (“It’s the Weekend”). But while the sonics are similar, the spirit of performance is slightly different, alternating between defiance and vulnerability. As queasy as he is about releasing albums under his own name, being solely accountable for his future has its benefits. This time around, he can book his tour stops around hiking trips and skateboarding parks.

“I’m pretty much just putting myself out there,” he concludes. “I wrote all the songs, I engineered the whole thing, I recorded it, I played all the instruments — this is what I do. Grandaddy was one thing, but it started from this bigger thing that I do. So, in a way, it’s kind of coming back around full circle,” he says with a thoughtful pause. “I just have better equipment than I did 15 years ago.”