Lovers At The Gun Club 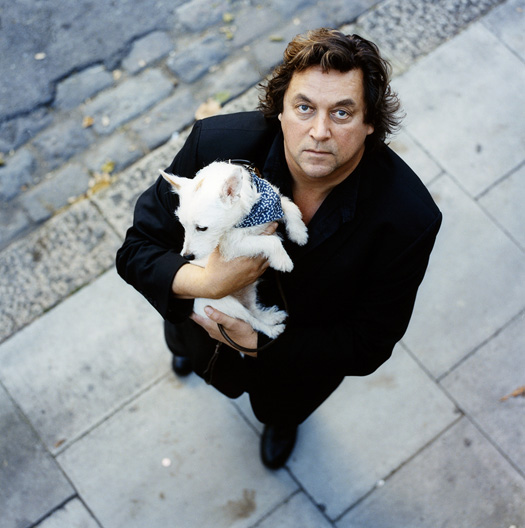 Born in 1950 into a Romany (Roma) family, Jackie Leven spent his childhood and teenage years clearly marked out as an outsider in the clannish, insular world that was Fife, Scotland at that time. Although Scottish himself, neither of his parents were from the area – his father was an Irish Cockney, his mother was from a large Northumberland (Geordie) family, and adapting to existing cultural norms was a hard, if not formidable task for such incomers.

This seems to have formed the start of an independence of mind in the young Leven, hopelessly wayward at school (although outstanding at English and essay writing), with few friends, and those mostly considered ‘oddball’. His attendance at school was woeful, but those truanting times spent alone in glens and hills and by rivers still form the basis of his songs’ imagery to this day.

Things started to change in his early teens. His mother, unusually for the time and the place, was a lover of American black blues music, and although Jackie was used to coming in the door from school to the strains of ‘I got the blues in the bottle, but the stopcork in my hand’ by Lightnin’ Hopkins, it was a source of fascination to school friends whose own homes resonated to the sound of Wooden Heart by Elvis Presley.

Soon he was playing in local bands – the first real electric scene at this time in this part of the world, but also playing his own blues songs in local folk clubs, such as the Elbow Room in Kirkcaldy, where he was encouraged by stalwarts of the scene like Archie Fisher and Hamish Imlach, and passing singers like Doris Henderson, with whom he played a few shows as guitarist.

However, such activity also brought him to the attention of local gangs, one in particular starting a baseless vendetta against him, and he was duly obliged to leave Fife, and indeed Scotland.

This precipitated years of rootless wandering, sleeping rough, living hand to mouth, including a four month stint living in corners of the South Bank Centre, London, where he busked for a living. This was during the late sixties when there was much less of the (relatively) ready acceptance of street musicians that now exists in the capital. He also lived variously in County Kerry, Ireland, Berlin and Madrid, where he had a record released, « Control » (1971) By John St Field (his stage name of the time) – now considered to be a psychedelic underground classic. He started to live in squatted accommodation in different locations in the UK where he began to encounter people with real and sometimes serious mental illness and psychic disorder. He often quotes the American poet Theodore Roethke’s great line – ‘for what is madness but nobility of soul at odds with circumstance?’.

These experiences began to inform his songwriting, and this can be clearly seen in the often disturbing imagery in the songs which make up the first two albums by his daunting rock band Doll By Doll, whose other members – Joe Shaw, David MacIntosh and Robin Spreafico he met in this environment.

Doll By Doll (1978 – 1982), a controversial live act at odds with the cartoon violence of punk, made five critically acclaimed (or loathed) albums (one unreleased, all not available on WEA) before accepting they just weren’t meant for those times, and regretfully going their separate ways.

After a late night recording session for a solo album due for release by Charisma/Virgin (1983) Jackie was the subject of an unprovoked street attack during which he, along with other injuries, was nearly murdered by strangulation. Unable to speak or sing, he lost his record deal, friends and way, entering his own period of psychic disorder, taking heroin (the classic drug of despair) and living in isolation for nearly a year.

He re-joined the world in 1985 after a successful course of traditional Chinese five-element acupuncture and psychic healing, and co-founded The CORE trust – ‘an holistic approach to addiction’. To this day the Trust operates a centre in central London, working with people with all forms of addiction. Jackie has been their manager, chair of trustees, and is presently the patron, having at one time enjoyed a good working relationship with the late Princess Of Wales, who took a strong interest in the Trust. During one encounter with HRH, she said to him « I understand you used to be a singer ».
« I AM a singer » was his bristling reply.
« Well, sing something now » she suggested.
That something was the traditional Scottish air ‘The Bonnie Earl Of Moray’ which had formed the basis of his celebrated Doll By Doll song ‘Main Travelled Roads’.

Shortly after this Jackie went to live in Oban on the west coast of Scotland. He spent the nights in bars with fishermen and forester friends, and the days writing the songs that became the basis of his return to music with the acclaimed Cooking Vinyl release « The Mystery Of Love Is Greater Than The Mystery Of Death ».