A Sleep & A Forgetting

Acclaimed modernist pop band Islands will release their new album A Sleep & A Forgetting this February 13th via Anti-Records. While A Sleep & A Forgetting continues the band’s penchant for crafting adventuresome and infectious state of the art pop music, this time band leader Nick Thorburn has infused the songs with a personal introspection that gives the record a new and powerful emotional resonance.

“This album is far more personal than any I’ve made before,” Thorburn explains. “I left New York after the end of a relationship and came to Los Angeles. There was a piano where I was staying and that’s where I wrote these songs. This record deals with loss, with memory and forgetting and with dreaming.”

Islands began in 2005, emerging from the ashes of Montreal pop sensations The Unicorns. In their previous incarnation, they had crafted a vibrant distinctly low-fi sound that quickly made them cult sensations. Popmatters heralded The Unicorn’s distinct style as, “genuinely great pop music that’s experimental, catchy, and, most of all, weird” while Pitchfork called the trio’s sound as “totally natural and new.”

With the Islands, Thorburn and his compatriots advanced a finely crafted futuristic pop sound. The group quickly became a sensation amidst the thriving Montreal rock scene. Their 2006 debut album Return To The Sea was recorded in the drummer’s bedroom and featured guest appearance by members of fellow Montreal bands Arcade Fire and Wolf Parade. All Music Guide described the record as “a rich, exciting, and emotionally deep sounding album.”

A Sleep & A Forgetting is the Island’s fourth album and the follow up to their critically heralded record Vapours, which Black Book described as « infectious and weird….masterful.” The new album was produced by Thorburn and fellow Islands member Evan Gordon in less than two weeks, the 11 songs recorded live with hardly a single overdub. It’s a stripped down process and beautifully understated sound which only reinforces the confessional content of the lyrics

Island’s latest offers all the shimmering sonic textures and irresistible melodies that have come to the band’s enduring appeal, but there is a deeply personal cathartic undercurrent to the songs. Far from being self pitying, A Sleep & A Forgetting powerfully transforms personal unrest into affecting and soulful pop music. “It’s kind of frightening,” Thorburn reflects. “I’ve always hidden behind devices and humor but this album is just so much starker and open.” And it’s a risk that absolutely pays off. The new record features some of the most startling and memorable songs from a supremely talented band that has continued to both evolve or surprise. 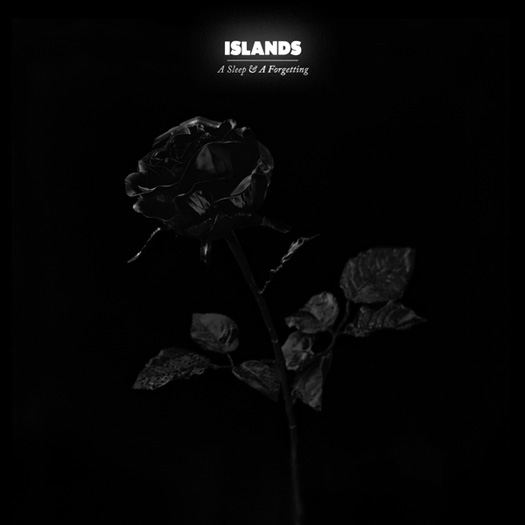