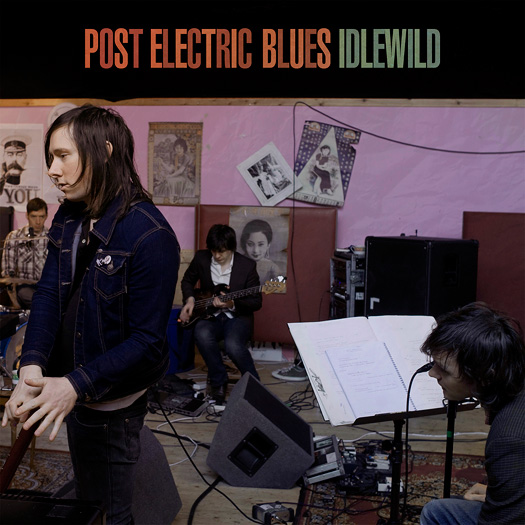 Idlewild has announced it will be releasing its seventh studio album, Post-Electric Blues, on Monday 5th October 2009.

The album, which was available earlier this year as a limited edition via the bands website, will also feature two bonus tracks – Take Away The Night Time and Take Me Back In Time (demo). These tracks will be available to download once the album has been purchased. The release will be preceded by a digital single, Readers & Writers, on Monday 28th September, which will feature an extra track, (The Night Will) Bring You Back To Life (demo)

‘Post-Electric Blues’ is an indie-rock album of Boss-like bombast, flecked with 70s synths and dashes of brass. It’s an album that leaps from Fleetwood Mac epic folk/rock/pop peaks into joyous Loch-side sing-a-longs. It’s the sound of a deft and defiant band(completed by Rod Jones on guitar, backing vocals, keyboards; Colin Newton on drums, percussion; Allan Stewart on guitar and Gareth Russell on bass), exploring soundscapes whilst finding hooks and generally, genuinely and quite clearly, having a fookin’ good time.

« Album opener ‘Younger than America’ was the first track we wrote for the album, » says singer Roddy Woomble. « The idea for the lyrics came from a spate watching Westerns – simple stories of justice and courage set at the ‘frontier’. It sounds the way it does because we’re all big fans of Neil Young & Crazy horse. After we’d written the song I though the record might turn into a American sounding piece of classic rock, but it didn’t turn out that way really, especially after writing ‘Readers and Writers’. The record went in whatever direction it chose to. »

Lyrically, the punk-rock sloganeering of their earlier work has become a mixture of poignant observational small-world imagery and universal ponder-neering. This isn’t all textural wilderness-gazing or woe is me Morrissey-like rambling. There are a few wry lyrics because « sometimes you need some daft lines in there, » explains Roddy, « I don’t that think it’s possible to have a rock song where every line is perfect, I don’t think that’s the point of rock music. »

Whilst the band were writing and recording the album, members of their fanclub-like online community saw and heard work-in-progress snippets: « The fans of the band were part of this album and were entitled to see the songs being written and to feel a part of them, » beams Roddy. « They paid for them to be recorded after all. In today’s musical world when everything has to be available and instant and people get bored quickly (far too quickly in my opinion) this album was our attempt to get with the times. I suppose the album title reflects this. We all really like and appreciate the fact the fans paid for us to make this album and that all their names are inside of it. » Written in Scotland and recorded in Wales (and Scotland), Post-Electric Blues is an album made to play live, as Roddy explains: « Most bands now make their living through concerts, and we’re no exception, so records have to be tailored that way. With ‘The Remote Part and ‘Warnings…’ we were writing songs that would sound good on the radio (and live, but the radio was more important – so we were told). There are a million new bands on the radio waves, or digital waves, now so it’s more important to us how we will sound good through a PA system in a club and that we can play and sing it all! »
www.cookingvinyl.com
www.Idlewild.co.uk
www.myspace.com/Idlewild