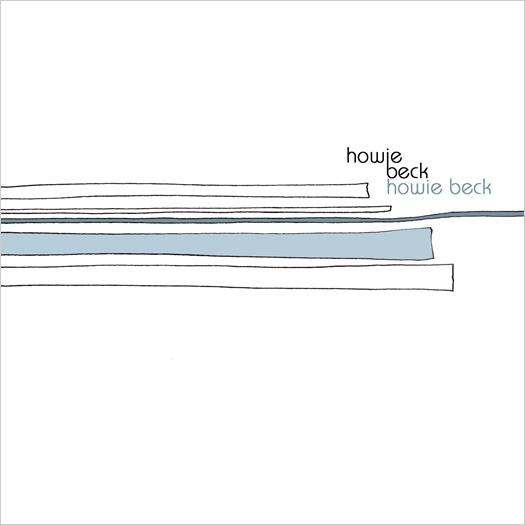 HOWIE BECK is likely the last person who’ll ever sing his own praises, so let’s let someone else do it for him.

Good music will always find an audience – not automatically, mind you, and not without surmounting a few hurdles along the way – and HOWIE BECK is living proof.

If you weren’t part of the small, but ardent cult that developed a few years ago around the unassuming Toronto singer/songwriter’s brilliant second album, 1999’s Hollow – the follow-up to 1997’s Pop And Crash, a princely pop debut Beck nonetheless now regards with baby’s-first-album humility – it wasn’t for lack of its admirers’ trying. A modest, home-recorded labour of love quietly released in his native Canada on BECK’s own 13 Clouds label that quickly found an audience of enthusiastic and supportive critics, musicians and indie-rock aficionados in his hometown, Hollow managed to amass a small army of devotees on at least a couple of continents over the next two years.

The start-up U.K. label Easy!Tiger came calling, lured by the record’s unnaturally accomplished bedsit songcraft and lavish domestic praise that had proclaimed the disc, among other things, “a staggeringly good pop album…a fragile, forlorn mini-masterpiece.” Tellingly, upon its belated European release two years later, the Hollow phenomenon proved itself not restricted by the Canadian borders. Publications such as Mojo, Time Out and The Face raved, while the magazines Uncut and Record Collector went so far as to include it on their year-end best-of lists, respectively dubbing the album “a brilliantly evocative portrait of emotional loss and mental comedown” and “a classic debut.”

BECK’s live dates overseas that summer were greeted warmly, tunes fromHollow began turning up in A-list T.V. shows like Buffy, The Vampire Slayer, Felicity and Queer As Folk, and invitations for opening gigs with artists as diverse as Ed Harcourt, the Stereophonics, Interpol, Aimee Mann, Josh Rouse, Shelby Lynne and the Wallflowers poured in.

Then unfolded what BECK himself euphemistically describes as “a weird time.” While on tour in the U.K. during the summer of 2001, BECK found his travel plans abruptly disrupted by the Sept. 11 terror attacks on the United States. Mere days later, one of Easy!Tiger’s two directors tragically took his own life.Hollow suddenly, and necessarily, took a distant back seat to pressing human concerns even beyond its own, adroitly sensitive reach.

“There I am, singing these songs about my little life,” BECK now recalls, “and the world is just collapsing around me. What do you do?”

Beck thus retreated to Toronto to deal with the situation as he’s always done: by writing and recording, and obsessively re-writing and re-recording, the intimate pop-life vignettes that are his stock in trade.

Friends would hear occasional reports of progress on a new album, but BECK’s solitary modus operandi – which has seen him shouldering all instrumental, production and even promotional duties on Pop And Crash and Hollow – meant he has more or less disappeared ever since. The odd gig here and there and appearances on albums by such chums as Sarah Harmer and Hayden letHOWIE‘s faithful know he was still keeping

musically active. Nevertheless, it took five apartments intermittently rendered unlivable by string sections, drumkits and entire refridgerator-loads of groceries sacrificed to the recording process (BECK has a tendency to ignore his own “FRIDGE IS OFF” signs) and a comparable number of irate landlords to birth the 13 immaculately arranged songs that make up his first full album of new material in five years, the laconically titled HOWIE BECK.

The results, as the saying goes, speak for themselves. HOWIE BECK introduces a new spaciousness and a remarkably surefooted, classic-pop polish to the music, but not at the expense of the whispered, 4 a.m. intimacy and naked honesty that led so many to hold Hollow so close to their damaged hearts. It’s a bedroom record that has graduated beyond the typical sonic trappings of the bedroom, proving that one can write and sing – as BECK self-deprecatingly puts it – “songs about loneliness, love, death and betrayal” (and girls; HOWIE loves his girls) from a vivid, up-close-and-personal point of view while still aspiring to the pristine, three-dimensional audio environments that encourage listeners to sink into the material with new ears again and again. Guest appearances by chums like Feist (“I Need Light”) and Ed Harcourt (“Don’t Be Afraid”) and artistically adventurous forays into bossanova, waltz-time folk and gleaming New Wave pop likewise haven’t compromised the disc’s pronounced sense of self nor its authentic, right-here-right-now urgency.

On HOWIE BECK, one still unmistakably hears the articulate, unaffected voice of HOWIE BECK. It’s just a more confident, nuanced and disciplined instrument, and one well placed to finally carry BECK’s work to the wider audience it sorely deserves.  (One could suggest that evidence of its triumph can be found in the fact that it inspired Jason Collett, of Broken Social Scene, to invite Howie produce his latest solo album, a record that will receive a European release in early 2006.)

One would, in fact, be tempted to call HOWIE BECK its author’s masterpiece were it not so clear from the evidence at hand that there’s so much more left to come.