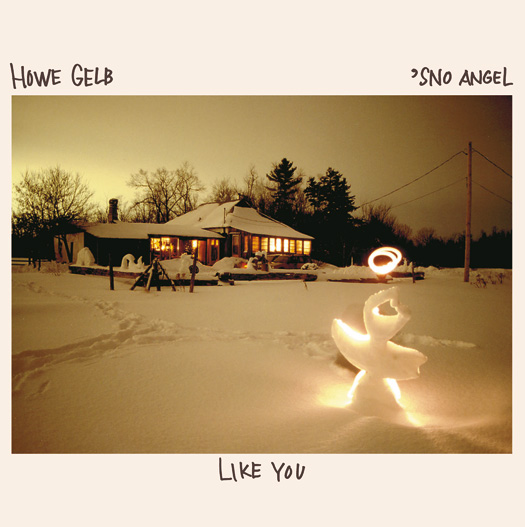 SNO ANGEL is a new project from Howe Gelb, set up when he records and tours with a full gospel choir.

LIKE YOU is the name of his record here with ‘SNO ANGEL.

Or… at the very least; HOWE GELB ‘SNO ANGEL LIKE YOU.

Howe recorded ‘SNO ANGEL LIKE YOU with the help of a Canadian gospel choir called Voices of Praise, but this is not gospel music, in theme or in content. Howe describes the album’s goal: “it was a grand experiment to see if we could mesh the sounds of the muck I make with the dizzying effect of the glorious sound [the choir] makes.”

While recording the album during an Ottawa winter, Howe was inspired by the drastic beauty of snow and a cold not often felt in Tucson. The image of a snow angel stuck with him as a symbol for the record and what he was trying to create.

In 2003, Howe was invited to perform at the Ottawa Bluesfest, and billed to play in a church

with singer-songwriter Jim Bryson. Howe was surprised to find their sets sandwiched between the performances of gospel choirs. Little did he know, that coincidence would lead to his inspiration for this album.

When one of gospel choirs performed, “that’s when it all began to make some sense to me,”

Howe says. “I was held captive by the sensation, glued to my seat there. I had never heard

grabs your heart and head like that, you celebrate and bask in it. I was physically moved.”

Rainstorms are always a good omen to a man from the desert. When Howe returned to his hotel room to reflect on the experience of the gospel shows, the sky erupted in a stunning storm, he took it as a sign. “The instigating sound in my head persuaded me to return to the church even though I knew the music was long over. I felt I had to make some connection before I left town,” Howe says.

When he arrived back at the church, Howe caught the final performance of the evening by

Voices of Praise, the choir group that would end up performing on ‘SNO ANGEL LIKE YOU.

After the performance, Howe approached the director of the church and asked him the fateful

question that all those voices had been pounding into his head: “Do you think it would be

possible to record with such a sound and not do religious material?”

“Sure,” the director said. “If you keep it positive!”

other musicians and producer who would eventually contribute to ‘SNO ANGEL LIKE YOU.

during Jim Bryson’s set, where he also met Bryson’s keyboard player, recording engineer Dave Draves. Susan Odle would later be the voice in Howe’s head encouraging him to pursue his idea, and Draves would go on to record the album. Bryson kept in touch as well, and he then turned Draves onto an old school buddy, Steve Johnston, who happened to be directing a gospel choir: Voices of Praise, the same group that had inspired Howe.

At the studio, Howe met a young musician, Jeremy Gara, who was finishing recording there

for the day. Gara became the inspirational drummer for the recording session and has since

become the drummer for Arcade Fire. “Jeremy and I set right into it, old-school, Giant-

Sand-style recording technique: just guitar and drums without him hearing too much of what

we were about to record,” Howe explains.

In the days following, the gospel choir arranged themselves on the tracks Howe had already

recorded, with five to ten choir members participating on each song. Howe and the ‘SNO

thought had always begged for a choir, and three Rainer Ptacek songs that Howe thought

“seemed seamless for the sensation at hand.”

The Band of Blacky Ranchette- Still Lookin’ Good to Me (2003)