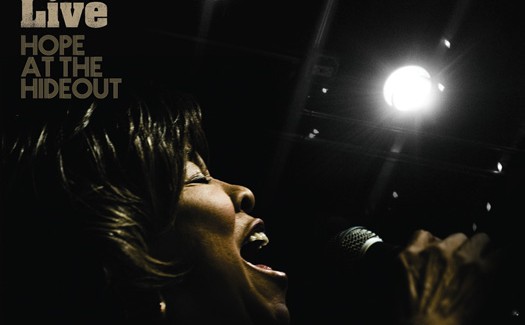 « LIVE HOPE AT THE HIDEOUT »

Truly great live albums are about capturing lightning in a bottle, that rare and perfect convergence of time, place and performance. When legendary soul/gospel artist Mavis Staples returned home to Chicago this last June for a performance at The Hideout, Chi-Town’s renowned stronghold of alt country and purist rock and roll, it was undeniably such a moment.

Those who packed the sold-out club were blessed with a riveting musical statement as Staples, backed by her fiery three-piece band and three backup singers, put on a rousing musical tour de force. Fortunately, for those of us unable to be there in person, the show was recorded and the album, Mavis Staples Live: Hope at the Hideout, is set for release November 3rd.

Acclaim for Staples’ Hideout performance:
“Anyone who was hearing this American treasure in concert for the first time learned precious lessons about where we have been and where we are today. Staples stood tall and shouted, ‘My mind is made up, my heart is fixed.’ And she smiled. She was not alone.” – Chicago Sun Times
“There are few living musicians who can lay claim to being America’s conscience, even fewer who continue to make vital music. On Monday night at The Hideout, Mavis Staples proved she’s still capable of both… Staples showed she can light a fire, agitate for change or re-energize the American songbook.” – Time Out Chicago
“While performing a 14-song set that canvassed her 52-year career, Staples sang with a voice that has long distinguished her from the R&B greats of her era and those who reach for that crown today.” – Chicago Tribune
“Staples’ sold out performance at Chicago’s Hideout last night brought the Civil Rights movement and all those souls who marched, sang and prayed during that critical time, to the crowded little room… The ghosts of the marchers stood among us, swaying, stamping, clapping.” – Popmatters

Track Listing for Mavis Staples Live: Hope at the Hideout: