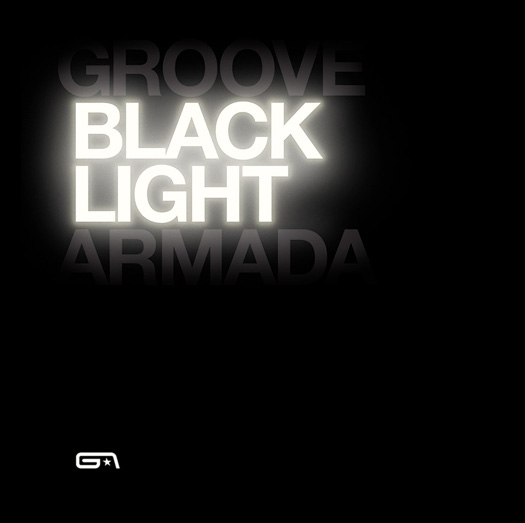 Not many bands’ sixth albums could be described as bold, brave, fresh, adventurous or representing a new creative peak. But Groove Armada’s brilliant Black Light is all of those things and more. Twelve years into a career as purveyors of top drawer dance music, Andy Cato and Tom Findlay have completely reinvented their sound, with thrilling results. This, folks, is not just Groove Armada. This is the new, re-focused and re-energised Groove Armada (with a glitterball-shaped cherry on top).

« We could’ve knocked out an album of ragga-influenced house bangers and a couple of chill out tunes, and that would’ve been a much easier life, » explains Andy. « But we needed a new challenge. Neither of us was interested in just repeating ourselves. » Instead, the music-obsessed duo took inspiration from the new breed of acts they were booking for their award-winning London festival, Lovebox. « Bands like the Friendly Fires, Klaxons, Passion Pit, LCD Soundsystem, Ladyhawke and MGMT, » says Tom. « They’re the ones really leading the charge, making genuinely exciting, dance-informed music. And that sound really pushed us back towards people like Bowie, Gary Numan, New Order, Fleetwood Mac and Roxy Music. » When the duo got together in Findlay’s basement studio in north London to start work on a new album, it was clear they were thinking along similar lines. « We didn’t really sit down with a plan, » says Tom. « We just started making the noises we wanted to make and this whole electro-driven, rock-tinged, song-based thing started to come out. »

The very first song they made for the album was Warsaw, a dark, juddering, electro-rock monster that’s one of several Black Light tracks to feature vocals from Empire of the Sun’s Nick Littlemore (« The most creative mind I’ve met for 10 years, » says Andy). The track quickly became an online hit when it was offered as a free sneak preview of the band’s new sound in September 2009. A comment on one music blog summed up the mood: « Brilliant track – like going to eat a kitkat and finding it’s entirely made of chocolate. Not what I was expecting but a lovely surprise. »

Feeling similarly inspired by their creation, Andy and Tom used it as the driving force for Black Light. For the next 14 months, they could be found spending 19 hour days hunched over mixing desks, instruments and computers, either in Tom’s London studio or in Andy’s, at his rural French home (nicknamed « Chateau Cato » by Pete Tong). « It certainly wasn’t an easy record to make, » says Tom. « I was really more of a beats and bleeps person until now, so I did feel massively removed from our comfort zone. »
But the duo did have their live experience to call on. As Andy points out, « Groove Armada are in a unique position where, after all these years of experimentation, we can deliver live dance music with a band better than pretty much anyone ». The ecstatic masses who saw them closing the Other Stage at Glastonbury in 2008, or the tens of thousands who’ve bounced along to sold out shows across the planet, will certainly attest to that. It’s why Groove Armada remain one of dance music’s biggest live draws.

Thus, in a break with GA tradition, their band was brought into the studio early in the making of the Black Light, helping to bring authenticity to their new song-based sound. Andy and Tom also began their tortuous quest to find the guest vocalists who would eventually work with them on the album, scouring their music collections, trawling the internet and asking for tips from friends (and friends of friends). Big names and undiscovered hopefuls alike were tried, tested and honed, discarded or brought into the Black Light pack. « It wasn’t about reputation, it was about who could help us make the very best songs possible, » says Andy.

Nick Littlemore was recruited after the duo remembered seeing his band PNAU playing live in Australia. « I loved that show, » says Tom. « He’s just got an amazing vibe; part Jim Morrison, part Nick Cave. He’s a great lyricist too. » « We tracked him down and, happily, he was up for getting together with us during some time off from Empire of the Sun, » adds Andy. « He just works beyond the rulebook. His ideas are amazing ». As well as Warsaw, Littlemore’s vocals drive the delicate, ethereal Fall Silent; the brooding, menacing Not Forgotten; and the emotion-heavy, 80s-tinged pop polemic that is Cards To Your Heart.

For another of Black Light’s main contributors, the duo turned to SaintSaviour, the livewire frontwoman of electro-popsters RGBs who’d supported them on a previous UK tour. With the RGBs having gone their separate ways, SaintSaviour was free to become a major part of the new Groove Armada sound. « She’s amazing in a lot of ways, » says Andy. « An incredibly talented vocalist and song-writer, and as hard working as we are. She’s also turned out to be a brilliant frontwoman for our new live show. I honestly think she’s the best performer of her generation. »

The singer has lent her crystalline vocals to the album’s first single, the gorgeous, regret-tinged I Won’t Kneel, as well the the defiant, punk-funk duet Paper Romance, on which she shares vocals with Ben from fast-rising dance-poppers Fenech Soler. St Saviour also appears on the deliciously driving, electro-skank Time and Space alongside Jess Larabee from underground Brooklyn rockers She Keeps Bees, a band GA discovered on MySpace.

« We’ve never actually met Jess, » says Andy, « but we got really into her albums and started emailing tracks for her to add vocals to. Her music usually has more of a White Stripes kind of vibe. But her mum was a dancer at Studio 54, so I think she got really into the disco flavour and she absolutely nailed it. » As well as Time and Space, Larabee lends her voice to the album’s gorgeous mellow gem, Just For Tonight (« basically it’s a female justification of a one night stand, » explains Andy), as well supplying some New York attitude to the spiky, rocked-up Look Me In The Eye Sister (a track the Yeah Yeah Yeahs would kill for).

But the vocalists are not confined to indie upstarts. No, the yearning voice you’ll hear on the stirring house lullaby History belongs to pop superstar Will Young, a friend of Andy’s since they bonded on nights out in Ibiza. And, having had Roxy Music’s Love Is A Drug on repeat for much of the recording session, it seemed only right to get the legendary Bryan Ferry to supply his first ever guest vocal to the softly intense Shameless. « That track is totally worth the posh dinners we had to buy to persuade him, » grins Tom.

Of course, Groove Armada are well aware that Black Light is a record which will challenge their fans. That was the whole point. « You have to keep things interesting, » says Tom. « I don’t want to become the Cliff Richard of dance. »

That said, they were both incredibly nervous about debuting their new sound in their headline slot at this year’s Lovebox. « I remember standing with Andy in the dressing room, waiting to go on stage, » says Tom. « I just said to him, ‘This is either going to be the end of everything or the start of something amazing’. »

It turned out to be the latter. Spurred on by an astonishingly assured performance from SaintSaviour, the band were triumphant. « The reaction to the songs was just incredible, » says Andy. « After all the work, the stress and the tension of making this record, it literally brought tears to my eyes. It just completely went off. » So much so that Groove Armada were later nominated for the Best Headliner slot at the UK Festival Awards, despite playing a set made up almost entirely of songs the crowd had never heard before.

« It’s amazing to make a record at this point in your career that you’re viscerally excited about, » says Tom. « But that’s honestly how I feel. » Andy is quick to agree. « I think even people who’ve hated everything we’ve ever made before could absolutely love this record. I’m incredibly proud of it. If I could leave just one album of ours behind, there is absolutely no question as to which one it would be. »
www.groovearmada.com
www.cookingvinyl.com