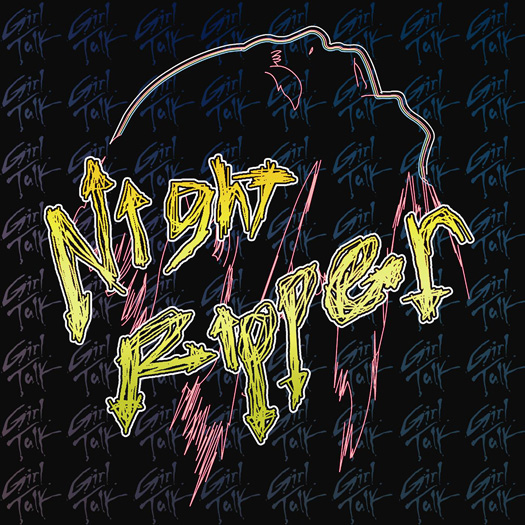 Are you ready for this record?? Ready or not, Pittsburgh’s Girl Talk (Gregg Gillis) has already released 2 former albums in the US (on the Illegal Art imprint) and is now releasing his third record in Europe for the first time and he’s got a party in mind!

Girl Talk has made a glitched out, beat thumpin’ project that is sure to surprise and make booties shake; Bringing together bits of current hip hop/crunk, soft rock radio standards, party classics, grunge masterpieces, R&B singles, glossy club-shakers, and rock anthems creating one non-stop celebration of pop and excess. With so many samples it’s nearly impossible to keep up, call it what you will: mash-up, mixtape, remix project, just know you’ve never heard anything like it. Rather than squeeze two songs that sort of make sense together into a small box, Gillis crams six or eight or 14 or 20 songs into frenetic rows, slicing fragments. Then he pieces together the voracious music fan’s dream: a hulking hyper-mix designed to make you dance, wear out predictable ideas, and defy hopeless record-reviewing.

As an illegal art form, it’s surprising no one came along with an idea like this sooner. Still, it’s doubtful they’d have the sturdy, meticulous hand that Gillis flaunts here. The record’s pacing is astonishing– with more than 150 sample sources (all thanked in the liner notes), it ricochets from Top 40 hits to obscure gems and back again like a cool breeze, clocking in at less than 42 minutes. The sampling is pure precision, slotting razor-thin (but highly recognizable) guitar stabs on top of blaring synths on top of anthemic rap couplets and so on, all at breakneck speed.

Part of the fun of listening is trying to figure out the source of each fragment used on these tracks. Familiar as they may be, you’ll never place every sample. But at the risk of getting sucked into Gillis’ name-game vortex, an example speaks to the power. « Smash Your Head » glides into the siren keyboards of Lil Wayne’s « Fireman » less than a minute in, then abruptly shifts into the crushingly dense riffs of Nirvana’s « Scentless Apprentice » while Young Jeezy spits the familiar flames of « Soul Survivor », before it all tumbles into a Pharcyde-Elton John-Biggie somersault. On « Minute by Minute », Gillis even slots Neutral Milk Hotel’s « Holland, 1945 » up next to Juelz Santana’s « There It Go (The Whisper Song) ». There are no ties, other than the miracle of chopping and looping.

With each release getting closer to his notorious semi-naked live show, Night Ripper is focused less on beat-fuckery and more on bringing heat to the party. Only Girl Talk’s magical touch could please both dance-crazed teenage masses and mashup geeks with equal love.

Due to its overwhelming number of unlicensed sources, Night Ripper is practically begging for court drama. In the event of litigation, Gillis’ US label has armed themselves with a Fair Use argument, citing artists’ rights to liberally sample in the creation of new works. Whether that’ll hold any water in a courtroom remains to be seen, but for listeners it’s an afterthought. Some may dock him points for lack of originality, but Gillis’ schizophrenic attitude toward pop music is so novel it’s impossible to stay mad at.

“the soundtrack of the summer”