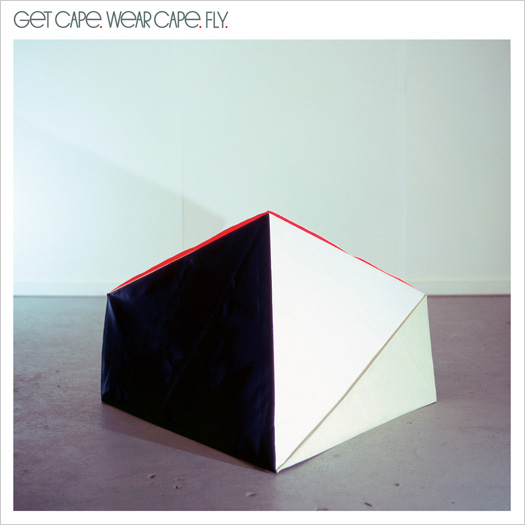 On Sept 13th 2010 Get Cape.Wear Cape. Fly., will be releasing their new self titled album on Cooking Vinyl Records on CD, Digital Download and a special iTunes version. As previously announced GCWCF are also on a full UK tour during September and October.

Sam Duckworth is Get Cape. Wear Cape. Fly., the Southend-born troubadour who surfed the Top Thirty with his home-made 2006 debut album ‘The Chronicles Of A Bohemian Teenager’ (an album written and recorded on a self-discovery tour of the UK), hooked in Kate Nash and Billy Bragg to guest on the similarly successful 2008 follow up ‘Searching For The Hows And Whys’ (co-produced with Nitin Sawhney), became a leading figure in the political pop scene (a pub run-in with the BNP prompted Sam to become heavily involved with the Love Music Hate Racism campaign) and was part of the new wave of modern folk heroes that’s brought us Jamie T and Jack Penate. He also spent time at SXSW earlier this year working with Billy Bragg on the ‘Jail Guitar Doors’ project.

Now Sam is ready to release his third album, entitled « Get Cape. Wear Cape. Fly. » Written and recorded over 2 years at his Hoxton base and Brixton’s Dairy Studios alongside co-producer Dean James, He built tracks around basic acoustic melodies, and added reams of electronic layers that saw the tunes spiral off in ever more elaborate and exotic directions, inspired by a new love for hip-hop and a rediscovered passion for drum’n’bass.

The record that emerged is the point where Sam dons the cape and truly flies. It’s as imaginative, broad of genre and adventurous as the best of MIA, taking in big beat hits (‘Collapsing Cities’, a collaboration with Shy FX), Swedish pop bangers (‘Nightlife’: « I wanted to do a cruise ship crooner song that’s so cheesy that it’s almost unbearable. And then to tip it over the edge, put a really old school hip-hop beat underneath it and a swing to the beat that matches the swing of a crooner ») ‘All Of This Is Yours’ which shuffles marvellously along like Gorillaz’ ‘Clint Eastwood’ and features vocals from Baaba Maal, this album is an elasticated world music wonder.

Embedded in this record are an abundance of quasi-political themes, ideas and concerns and Sam expands on them at length: from the shedding of mankind’s global responsibility to attacks on the greed of the banking system, the unifying nature of poverty-stricken communities, the emancipating possibilities of the internet for China and Iran, the BNP losing every council seat in the election plus the power of the protesters in Kent who forced the closure of a planned power station in Kings North.
www.myspace.com/getcapewearcapefly