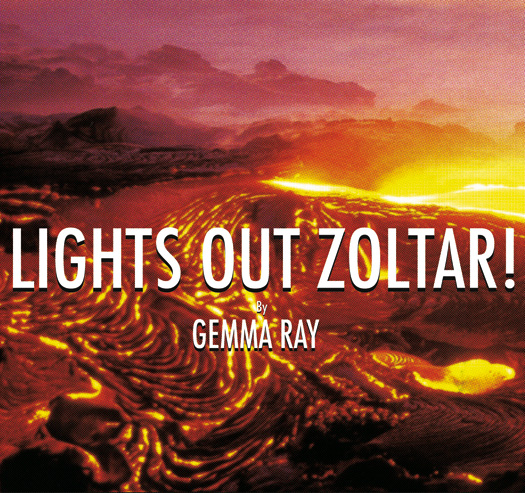 Gemma Ray is the real deal. A self-made and unique artist, this is especially apparent with the stunning new album “Lights Out Zoltar!”.
It is sometimes hard to comprehend that this album of breathtaking scope was recorded at home with co-producer Michael J. Sheehy with the services of but a handful of other musicians, and completed within 6 months of the release of her debut, “The Leader”. The epic multi-layered sound has you assume the dedicated workforce of a full-blown orchestra is behind it all. Yet harmonies galore are Gemma’s alone, apart from the male voice choir and the guest duet vocal on 1952 by Joe Gideon of Joe Gideon and The Shark).
Spontaneous and uncontrived, Gemma is a natural product of her influences. And whist “Lights Out Zoltar!” is an eclectic work of broad ambition, never does it fail to sound anything other than the work of Gemma Ray. From the latin-tinged pop noir of 100mph (in 2nd Gear), to the surfed-up swagger of Fist of a Flower, to the rollicking shanty-like (You Got Me In A) Death Roll to the mesmeric folk horror of If You Want to Rock and Roll, “Lights Out Zoltar!” evokes an unfamiliar world, but one that will sustain you nevertheless.
That first album, critically-acclaimed as it was, was fraught with setbacks. Recorded against a backdrop of illness brought on by mystery blood-poisoning, she then found herself in a position where she was unable to tour and promote it due to the ongoing repercussions. For the sake of her sanity the only way to abate the frustration was to keep recording and writing at home in London. Despite the circumstances, the darkness is interlaced seamlessly with humour, playfulness and beauty throughout the album, and its ability to capture all moods in one fell sweep means it will get you in the end.
Make no mistake, doubters and stragglers will be converted and convinced by the kick-ass live show in which Gemma (now back on track and in good health) and her band take the songs to an even heightened level of hypnotism and drama. Her recent tour of Germany was an indication of this, as audiences were captivated by the performance, which includes Gemma Ray playing slide guitar not with a slide, but with a very intimidating Psycho-style kitchen knife.
Fans include Jimmy Page, Seasick Steve, The Duke Spirit, Joe Gideon, The Bad Seeds, and now you. Gemma Ray has raised the bar.
The album is preceded by the single 100 mph (in 2nd Gear) released on August 24th, and backed with 900 Miles, the Odetta cover that was used as the soundtrack to the BBC psycho-flick Mum & Dad.

Praise for “The Leader”

« Disarming…swooning…with noir-ish hints of Lee Hazelwood’s unearthly country-rock… Ray sits midway between Nina Simone and Isobel Campbell and is the better for it.” – MOJO

“A wonderful debut album… Gemma weaves an entrancing tapestry of soul, blues and pop, full of dark themes and late-night confessions, all presented in a sultry, seductive voice. With Duffy, Adele and Beth Rowley joining Amy Winehouse in the upper reaches of the charts, it’s clear girl singers are all the rage. But few, with the exception of Amy, are as raw and honest.” – THE SUN

“Gemma Ray’s music defies easy categorisation…she has a clutch-purse full of sundry party tricks. You could do worse than imagine PJ Harvey in thrall to The Shangri-Las. Both Dry River and Hard Shoulder rise from minor key squalls to full girl-group majesty, while Rise Of The Runts shows she has no problem producing straight, sparkling pop.” – THE WORD