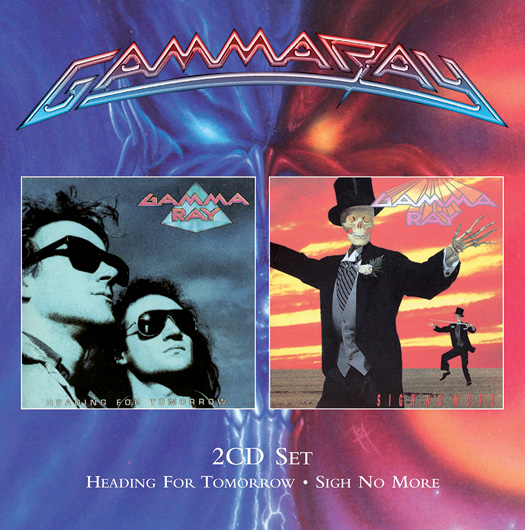 GammaRay has announced it will be re-releasing its first four albums – Heading For Tomorrow, Sigh No More, Insanity & Genius and Land Of The Free – as two double CDs with bonus tracks, on Monday 25th January 2010. Each double CD contains an 8 page colour booklet with extensive sleeve notes, and vintage band photographs.

GammaRay was formed by ex-Helloween guitarist/vocalist Kai Hansen in 1988. During its 21 year career, it has recorded 9 studio albums, gone through numerous personnel changes and toured with the likes of Iron Maiden and Stratovaris. These early albums established the band as one of the premier power metal groups to come out of Europe.
HEADING FOR TOMORROW / SIGH NO MORE
Originally released in 1990, Heading For Tomorrow features vocalist Ralf Scheepers (of Tyran Pace), bassist Uwe Wessel and drummer Matthias Burchardt. Taking the sound and style of classic Helloween, the album is packed with melodic and bombastic power metal, fantastic guitar work and wonderful vocals. Hansen wrote all the songs, bar Free Time (which was written by Scheepers) and the Uriah Heep cover Look At Yourself. The title song, and Heaven Can Wait quickly became live favourites and remain so to this day.

Sigh No More was recorded in 1991 with producer Tommy Hanson (who Hansen had worked with in Helloween). The band line-up changed slightly with Dirk Schlachter being added on guitar and Uli Kusch on drums. This is an altogether darker album than its predecessor, having a lyrical approach that reflected the aftermath of the first Gulf War. There’s a world weary edge on songs such as (We Won’t) Stop The War and Countdown, that took the band away from the fantasist passion and naivety of their debut release. Hanson gave them a stark and startling production, and you can hear a fever and fervour throughout, especially on songs like ‘Rich And Famous’, ‘Father And Son’ and ‘One With The World’.
Bonus tracks on Sigh No More: Heroes / Dream Healer (pre-production version) / Who Do You Think You Are
INSANITY & GENIUS + LAND OF THE FREE
By the time the band went into the studio to record 1993’s ‘Insanity And Genius’, they had had gone through yet another line-up change. Only guitarist Dirk Schlachter remained alongside Hansen and Scheepers, with bassist Jan Ruback and drummer Thomas Nack (of Anesthesia) coming into the fold. With a style that reverted back to the more straight ahead and forthright approach of their debut, GammaRay continued to come up with some striking material. Moreover, it wasn’t just Scheepers who had the lead vocals role here. Hansen took command for Heal Me, while Schlachter got the job done on Your Turn Is Over.

In 1995, the melodic masterpiece, Land Of The Free was released, and was the bands first major success. Schleepers had by now left the band and Hansen had taken charge of the vocal duties. One of the most poignant songs here is Afterlife, written by Hansen as a tribute to former Helloween band mate, drummer Ingo Schwichtenberg, who had committed suicide earlier in that year. Michael Kiske (Helloween’s former front man) makes a guest appearance as lead vocalist on Time To Break Free, and does backing vocals on Land Of The Free. The album also features guest vocals from Blind Guardian’s front man Hansi Kursch on Farewell (lead vocals), Land Of The Free and Abyss Of The Void (both backing vocals).
www.cookingvinyl.com
www.gammaray.org