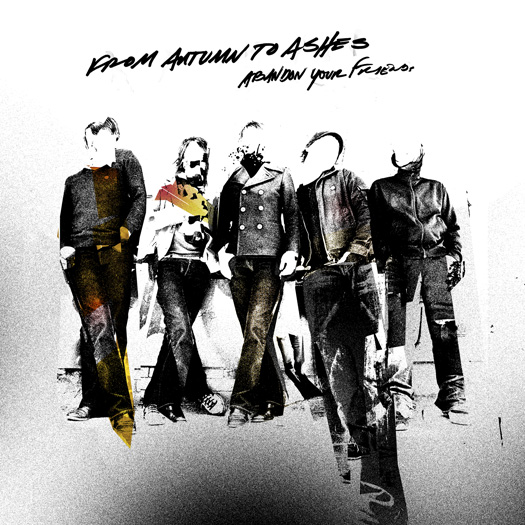 Now that it’s trendy to combine grinding metallic guitars and hardcore rhythms with heart-on-sleeve vocals and hum-along melodies, dozens of bands are writing predictable songs that alter ingredient levels slightly in what feels like a search for the perfect recipe. By contrast, Long Island, New York’s From Autumn to Ashes shred and burn the recipe book altogether.

The band’s third album, Abandon Your Friends, is as volatile as a manic depressive who refuses to take his meds, the sonic structure spiking from track to track like heart monitor during a cardiac arrest. « It’s like a constant ongoing battle between darkness and the brighter side of things, » says vocalist Benjamin Perri. « There’s always going to be both sides to a story, so we like to incorporate both aggression and beauty and throw it all into a blender and the way it falls out when we dump it is the way it is. »

By staying true to all of its influences – from Taking Back Sunday to Slipknot – From Autumn to Ashes conjure an unflinchingly honest, tense and original sound that leaps genres with ease. « Short For Show, » for example, is a brutal showcase of rage fueled by serrated vocals, a bulldozer guitar rhythm and ominous minor-key guitar licks, while « Streamline » is reflective and melancholy, combining fibrous guitars and longing melodic vocals.

« It has always been hard for us to find a niche and fit where we belong, but that’s kind of cool because we can wiggle into a lot of different places, » Perri says. We can play with Brand New and Taking Back Sunday and fit in perfectly, but we’ve also played support to Killswitch Engage, and we held our own with those guys. »

Abandon Your Friends will further perplex those looking to pigeonhole From Autumn to Ashes, but for anyone open-minded enough to enjoy both sides of their sound, it’s both gratifying and enlightening. « Long To Go » is a revealing track filled with understated vocals and gorgeous, enervated guitars that exposes the band’s sensitivity without being soft, « Where Do You Draw the Line » starts with a feral thrash metal rhythm and only lets up briefly at the chorus and « Kansas City 90210 » combines a ringing guitar melody with a staggering beat and vocal harmonies that belie the pain of the song.

From Autumn to Ashes formed in October, 2000 in a garage in Farmingdale, Long Island after Perri, who used to write for a punk zine, befriended drummer and vocalist Francis Mark, who had been in a band called Who’s to Blame. The two started jamming with Mark’s ex-bandmates, guitarist Scott Gross and bassist Mike Pilato. Encouraged by the way Mark’s melodic vocals blended with Perri’s acerbic shouting, they started writing songs and booking shows. Then, three months after the band started, their second guitarist, Steve quit and was replaced by Brian Deneeve.

It was that lineup which recorded the fierce 2001 debut Too Bad You’re Beautiful, which sold over 100,000 copies on Ferret Music, the most any band on the record label had moved. On their follow-up, 2003’s The Fiction We Live, From Autumn to Ashes refined their songwriting without losing their ferocity. The disc, an effective blend of nuance and destruction, shifted over 150,000 copies and the band supported it well-received tours with Alkaline Trio, Atreyu and Cave in.

Then last year, the group underwent a significant lineup shift, which, although traumatic, strengthened their lineup. First, Gross left the band to deal with some personal issues, and was replaced by Cox, who had previously played in the band Tension and was good friends with Deneeve. Four months later, Pilato decided to step down because he wanted to spend more time at home. He was replaced by Newton, who was the bassist of Reggie and the Full Effect, with whom From Autumn to Ashes had previously toured. « We had played with Reggie last year, and Josh had told us, ‘If you ever need a new bassist, call me,' » recalls Perri. « So, we did, and asked if he could play with us for a while to see if it would be the right fit. Then, in September, we were in Edmonton, Canada, and right before we went onstage, we asked him to join. »

From Autumn to Ashes started writing Abandon Your Friends in mid 2004, but the bulk of the songs came in early 2005 at an old house the band rented in upstate New York. The band spent three weeks there, focusing their energy and emotions to concoct a turbulent, finely crafted batch of songs.

« It was good to be locked in a controlled environment like that, but it wasn’t easy, » Perri says, « It really took its toll on everybody. There were times where we were all super-stressed and didn’t know what to do or what we should be doing or where we were going. We all had different ideas and we all wanted everyone’s voice to come through. »

Adding to the anxiety was the creepy environment were in. Perri likens the vibe in the rented house to the Overlook Hotel from the movie « The Shining. » « There were doors that would open out of the blue, » he says. « The water pipes burst a couple times for no reason whatsoever and the heaters went on and off at certain times in the night. It was really bizarre.

Helping the band achieve its exceptional, multifaceted tone for the record was veteran producer Garth Richardson, who also worked with From Autumn To Ashes on The Fiction We Live. But while the group and Garth worked quickly last time because of time restraints, with Abandon Your Friends they had the luxury of trying different options to see what worked best.

« He helped bring the songs to their full potential, » Perri says. « We came in with the sketches and he helped us finish them by putting the harmonies where they should be. He put random noises in places we would never had dreamed of, but which sounded amazing. And he cut and pasted things and put them where they don’t seem quite right but when you listen to them you’re like, Yup, that’s where they should be.’ It wouldn’t have been the same without him. »

The lyrics for Abandon Your Friend reflect the instability, anxiety and insanity From Autumn to Ashes experienced during the over the past year. Mark, who tackles most of the more melodic passages, wrote about what was going on during the disc’s creation, while Perri wrote about mistakes and traumas from the past and how he’s dealing with the aftermath today. « Like everyone else, I’ve been wronged before, but instead of just being angry, I try to put a positive spin on things to let kids know that there’s hope out there. It’s not just them that feels this way. »

For Perri, overcoming obstacles involves confidence and determination. « The secret is not to be intimidated or inhibited by what other people think, » he says. « Live life like you want to. Don’t follow any rules but your own. Do things for yourself and make yourself happy before other people. It sounds selfish, but you have to be happy yourself before you can do things for others. »

It’s a lesson From Autumn to Ashes have learned in their five years together, and one that’s served them well through musical trends, lineup shifts and personal trauma « When we started this band, we did a four song demo, and even though no one had ever heard it or knew who we were, we did a full U.S. tour, » Perri says. « We just shoved it down people’s throats and refused to take no for an answer. If you want to succeed in this business and get what you want, that’s what you have to do. And now, we feel like nothing can stop us. »