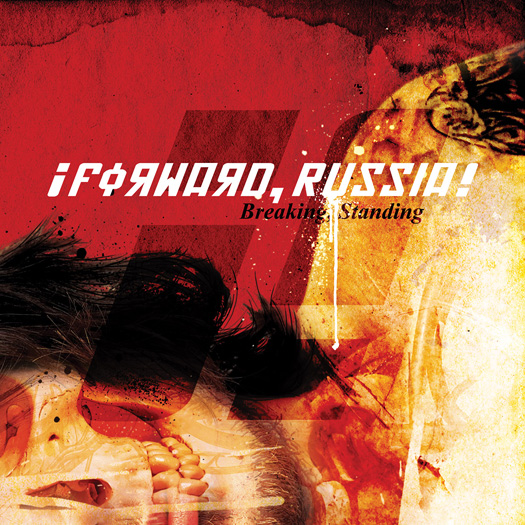 The absolute-beginner basics, for latecomers at the back: ¡Forward Russia! formed in Leeds in 2004, from the ashes of other bands that never truly went anywhere; they are Whiskas (guitar), Tom Woodhead (vocals, keys), Katie Nicholls (drums) and Rob Canning (bass). They released a much-admired debut album, Give Me A Wall, in 2006 following a series of equally respected singles. The album was released via Dance To The Radio, a label founded by, among others, Whiskas. Up to speed? Good. Here is where their story continues.

¡Forward Russia! are relative anomalies in a corner of the UK music scene rarely afforded its rightful moment in the sun. Where so many independent ‘alternative’ (read: genuinely progressive and ambitious, rather than the many aping stateside formulas) bands spark into so-brief flames of national interest, this Leeds-based quartet achieved the remarkable with their debut album, Give Me A Wall. Critically acclaimed, internationally as well as domestically, the 2006 long-player spawned a pair of Top 40 singles in the UK (‘Nine’, ‘Twelve’) and sold by the truckload.

With its follow-up, Life Processes (on Cooking Vinyl following the band’s decision to end their association with DTTR – band member ‘in charge’ of other members deemed « unhealthy » and never good), finished and ready for release into the wider world, the band are reflective, guitarist Whiskas admitting that Give Me A Wall « definitely punched above its weight ». Why? « The success was maybe justified as I think we captured peoples’ imaginations a little bit, » says Whiskas, vocalist Tom Woodhead adding, « We were probably in the right place at the right time, and we got a lot of breaks. »

But Woodhead is the first to stress, despite impressions, that the band is yet to fully court the mainstream: « Ask the average person about the band and you would be met with a blank stare. » The average person, perhaps, isn’t ready for Life Processes either – the 11-track sophomore release is a considerable advancement from the scratchily acerbic post-hardcore histrionics of its predecessor, and has been shaped with the assistance of renowned producer Matt Bayles (The Blood Brothers, Mastodon, Minus The Bear, Pearl Jam) in Seattle.

Recording with the hugely experienced Bayles appealed greatly to ¡Forward Russia!; forget his enviable past credits, what was especially important was that he had little previous experience of the band, no real frame of reference that could conjure expectations. A clean slate was in place. Says Woodhead: « Matt has an almost pathological attention to detail. He would not settle for second best, and encouraged us to try anything that we were interested in hearing. He has made us sound better than we have in the past, and our ideas have been conveyed clearly. »

And those ideas – the concepts that guide Life Processes – have rarely been as boldly realised. Where so many ‘indie’ acts are retelling kitchen-sink tales passed down by influential industry impresarios past, ¡Forward Russia! look inwards to step onwards, cornerstones universal but execution quite singular. Woodhead: « There was an effort on my part to write more ‘human’ songs. I have always written about experiences, but maybe it wasn’t obvious. Each song (on Life Processes) tries to describe a particular facet of life – things it seems we all go through. The themes are more universal, really – fear, love, hate, pride, nervousness, confusion, and finally acceptance. There is a beginning, a middle, and an end, in a literary sense as well as a musical one. The album begins with fear and confusion; towards the end life is not understood, but it is accepted. »

A weighty prog-rock album Life Processes certainly is not, though; this is tumultuous modern rock, infused with the sort of spirit that once made At The Drive-In such a must-see live attraction, and likewise Les Savy Fav today. This is an accessible otherworldliness, a distillation of four individuals’ experiences focused into one formidable album. Aspirations have, quite evidently, been achieved.

And new levels of immediacy? Perhaps not, and perhaps for the better – like so many of your favourite albums, Life Processes is likely to take its time in becoming a classic of the post-whatever canon, and Woodhead’s the first to recognise it as a record that’ll reveal its myriad layers over repeat listens. « It’s not an immediate album, but we certainly cannot be accused of standing still – we will be seen as having progressed. People may be surprised by some of the quieter, prettier parts; some of the heavier parts will raise eyebrows, too. ‘Spanish Triangles’ is the song that will be mentioned most with regard to our ‘new direction’. »

The album’s closer is certainly unlike anything recorded by the four-piece previously; not even the experimental between-album single ‘Don’t Be A Doctor’ – a one-sided 10″ released in 2007; « Something we needed to get out of our system, » says Whiskas – suggested that the band were capable of penning anything as epic-sounding as ‘Spanish Triangles’. The song’s perfectly indicative of a newfound maturity, an appreciation of the songwriting process that wasn’t fully fledged on the band’s quick-fix debut, rightfully lauded though it is. This album is bigger, simple as, an album that’s captured in eleven songs the mindset of three men and one woman striving to better themselves, to make good on the promise that blossomed so unexpectedly beautifully two years ago.

Give Me A Wall was the foundation that’s made Life Processes possible, but now the furore surrounding said release has died down, ¡Forward Russia! find themselves in a truly enviable position: nobody is going to have seen these songs coming, and many are going to find their feet taken from beneath them. Great bands are not established on debuts, its catalogues that trace the progress from good, through promising, to bona-fide classic. If ¡Forward Russia! never make an In Utero, or an OK Computer, then this will hold up as their classic one LP ahead of schedule, an anomaly amongst so-called ‘difficult’ second albums.

The remarkable, like lightning strikes, so rarely happens to the same people twice. But Life Processes is more about bucking trends than following them. It doesn’t adhere to your hype, to your sales patterns and demographic growth. It is a separatist movement of one, about ready to storm those barricades. Persons once-shocked, best stay off the golf course this weekend.

Oh yeah, they don’t ‘do’ numbers anymore. FYI and all…