SEPARATED BY THE SEA 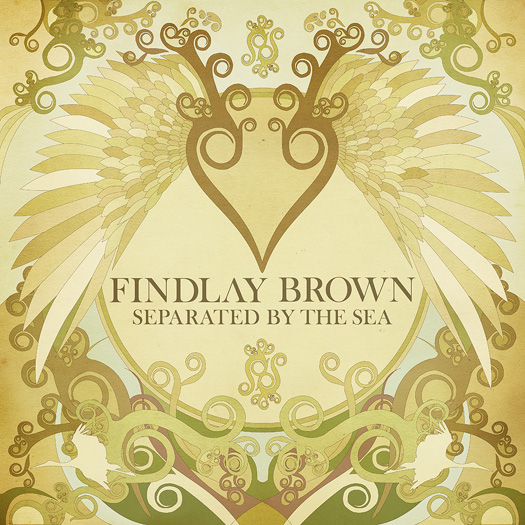 Singer-songwriters tend to be utterly wet. If they could ever prize their arses from those stools of which they seem so fond, they’d prance about declaring ‘Hullo clouds, hullo sky’ as per Ronald Searles’ 1950s literary softie Fotherington-Thomas. And this is often reflected in their music, which isn’t passionate and heartfelt so much as saccharine and grating.

Findlay Brown gives the singer-songwriter back the edge that made the likes of Bob Dylan and Paul Simon more than just bardy entertainers. His ambitious music may be intimate, bare, and dare-I-say-it sensitive. But vitally it’s also courageous, triumphant, challenging and otherworldly. Emotionally-driven, psychedelic, spiked with wit, blessed with a cidery traditionalism and foiled with subtle, yet noticeably modern, production from Simian’s Simon Lord, Findlay’s work is truly ‘alternative folk’. But he says he’s “more influenced by sixties musicin turn influenced by folk”. Crosby, Stills and Nash, The Band, and cult auteur Jackson C Frank (whose autonomous album was produced by Paul Simon) are his own points of reference.

And Findlay himself is no introspective wimp either, but the exactly the ‘girt lion of a man’, to use the Yorkshire vernacular, who should be picking up a guitar.

“When I was younger, the plan was to join the army. I grew up in a tiny town in East Riding next to an old World War Two airfield. We had hangars and bunkers on one side and woods and fields on the other. My mates and I would bomb around in combat gear building rope swings, riding motorbikes and generally causing havoc.” Including taking part in Gypsy bare-knuckle boxing contests.

“I did it when I was about eleven for a couple of years. One of my good mates, (Al Greenwood), his dad was a blacksmith who did a lot of work for the gypsies and fought with them as well, so they’d put us in the ring too. It’d be kids the same size, didn’t last long and was mostly wrestling, until the other guy said ‘I give up.’ But despite all that I’d always thought I had to be tough. When I was three, a guy called Neil Barker, who ended up hanging himself in a church, picked me up by my ankles and swung me into a lamp post repeatedly. Six years later he was sunbathing outside my house so I went out with a piece of corrugated iron and… well, he didn’t so it again. People think the countryside is idyllic compared to the city. But it’s worse. Being a bit cut off from the rest of the world can make people violent.”

Music was of little importance to him at that age. But awaiting the young Findlay was the other thing that people in the countryside do to pass the time aside from fighting.

“I started getting into psychedelic culture. Heavily. And one time I went around to someone’s house one weekend and they were playing Electric Ladyland by Jimi Hendrix. That was a kick in the head – I didn’t even know it was a guitar making those noises. My pals and I went from having a few Pet Shop Boys singles to everything we listened to being Iron Butterfly, Love, Spirit, Family, Kaleidoscope… all these trippy bands and lots of krautrock. The house we were living in by then was in York, not the countryside, it was like Coronation Street and I hated that. But I’d discovered music and I was pretty happy.”

Findlay had never yet picked up a guitar. “I was working in the local chocolate factories, Rowntrees, Terry’s, the major players… And hanging out with lads who were in quite successful bands. They’d jam together round people’s houses after gigs. One time, they were doing a John Lennon number and I just came in with the MacCartney harmonies instinctively – they were dead impressed. And that’s when I thought ‘right, I’m going to have a go at this, and I’m going to be better than all of you.”

Findlay’s granddad, a successful chef who’d lived through Swinging London, had bequeathed him a set of the Beatles’ autographs. He sold them to buy guitars. “So my first guitar was a Gibson 335, and I had a Fender Twin, the same as John Lennon’s set-up.”

Now living in Ladbrooke Grove, Findlay answered an ad in the NME and started singing for a band. “It never worked out, but that was the first time I started listening to electronic music, and up until then I’d been totally retro. There was a stage when I was just walking into record shops and buying anything from 1967.”

Stints in various experimental acts followed. “The music we were making was based around noise and power. I was writing more melodic stuff though. I found it all a little too sweet – but I could write a ‘Blackbird’-type song in a day, whereas a ripping upbeat Stooges number would take me a month. So, I thought I’d play to my strengths. I wanted to do something really personal from the forefront of my mind.”

Inspiration came – “it was staring me in the face” – from a tempestuous relationship with his long-term Danish girlfriend Marie. He started writing songs to finally snare her after becoming conscious of being “a total nob”, and dispatched them to Denmark in CD cases packed with dried flowers. As the Silk Spectre says of her hard-bitten lover The Comedian in Alan Moore’s superhero classic Watchmen, “Do you know what gentleness means in a man like that?”

“It’s not like the album is all about me and her, but she’s influenced everything like a muse” says Findlay. “I Will, subtitled ‘Ghost Ship’, the first track on the album, came from the sea separating the two of us. I imagined her like a wrecked ship, and

myself as the sprit of some sea dog captain, the two of them searching for each other not realising they’re ghosts. I want to be more like a fictional character that listeners can choose to be someone else personal to them, than heard as myself.”

Whilst many songs on the LP do examine Findlay and Marie’s relationship, impetus also comes from other complex factors like male pride, Findlay’s love/hate relationship with a rural upbringing, and other aspects of his childhood.

Twin Green Pram for instance concerns his twin sister, who died when she was a month old. “My mum brought a pram for twins and never replaced it” he explains, as do the lyrics ‘Lying I am but on my own, an empty space, a beautiful face I’ve never known.’

“When I was young my mum made me read all these illustrated learning books called Peter and Jane. And I’d dream about my sister, and I’d imagine she looked like Peter. He didn’t really look like a boy or a girl, he had a brown basin cut that was a bit long, and a red polo neck. Sometimes I’d speak to my older sister and wonder what the family dynamic would’ve been like if my twin had been around. Sometimes I wonder if it wasn’t meant to be – we were very poor and my mum didn’t need another mouth to feed. It isn’t upsetting as such, but it is a big deal to me. And it was terrible for my mum, so I wrote the song for her.”

Paper Man “is my go at being political” but displays a self-awareness rarely found amongst Britain’s liberal youth. “I hate to say it, but I did have George W bush at the back of my mind. I know it’s such a clichéd thing. I wrote it first, stream-of-consciousness style, then tried to make sense of it. It’s about how powerful, decisive people can be the most fragile. The Paper Man is someone everyone admires but wouldn’t if they knew what they were like. He tries to convince himself he’s a good person by convincing you. And they do manage to convince you most of the time – but they’re probably not convincing themselves. And then I thought: ‘That’s not just George Bush. That’s me as well’.”

Come Home is a paean to the more appealing aspects of country life compared to the city, fresh air as opposed to hot air. “When I first moved down to London coming from the north was exotic – the media were mad for Oasis and everyone said I looked like Vernon Kaye, which of course I hated. It’s about not fitting in, but in a good way, people in this industry being so false, and wanting the genuine article rather than bullshit.”

Findlay’s next single, released August 8th, is Down Among the Dead Men. “It’s about trying to give up alcohol, girls and partying, and how fucked up my relationship was at the time – ‘I’ve been running from the heavens, now they’re coming after me.’ John Lennon did a couple of songs about his mum being dead and when I listen to them I think he’s said too much sometimes. But that’s exactly what I’m doing. I think I’ve got a bit of a problem with appearing weak. The background I’ve had, growing up with the tough lads, for this life I’ve had to try and ‘un-learn’ a lot of that. When I was little, if I’d shown a drop of weakness, they’d have had my money, they’d have had my bike, they’d have had the lot. But now I can be vulnerable.”