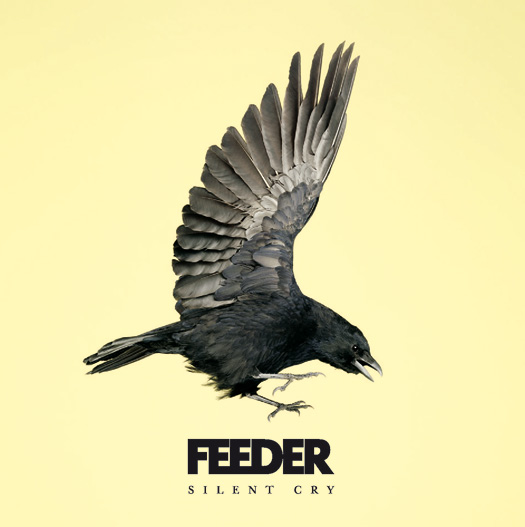 At a time when most bands come and go almost too quickly to even notice, Feederare a welcome, all-too-rare exception to the norm. First formed an incredible sixteen years ago, they are stronger today both in creative terms and as a band than they have ever been, remain equally passionate about their music now as then and are still driven to ensure more and more people hear what they do. Furthermore, they have weathered the sort of ups and downs that often destroy lesser bands yet, crucially, continued to forge their own path regardless of passing scenes or fads, building a loyal and startlingly diverse audience on the way who know that bands like Feeder don’t come along every day.  As inspired and musically fearless as ever, their new album, ‘Silent Cry’ proves they remain at their creative peak after all this time too. With a return in part to the heavier guitars that characterised early Feeder records, it still bristles with devastatingly potent melodies and lyrics that tell of a very personal reaction to the world around us. It is an album that, unusually, was made to be listened to in its entirety and sounds all the more powerful for it, an album that shows unequivocally that Feeder are more relevant than ever.

Sixteen years on, life has altered Feeder’s course in ways they could never have predicted but really, very little has changed when it comes to the motivation behind it all.    “The idea behind this band was that we were a very noisy three piece but with melody,”  singer, song writer and guitarist Grant Nicholas says of forming the band in Newport, Wales with original drummer Jon Lee, later meeting bassist taka Hirose in London.   “But if you listen back to those first demos, it’s not that different from what we’re doing now, so I’m amazed when people say we’ve changed so much because actually we’re still doing exactly what we set out to do.”    Indeed, even more incredibly, the band still have the same manager Matt Page and label – Echo – as they first started out with, remaining driven by the same passion and determination to make their music heard.  “When the guy that signed us came into our crappy little rehearsal room in King’s Cross, we just rocked out and played like we were doing a gig,” Grant remembers.“We probably looked a bit stupid looking back on it, but he asked us what we wanted and we said we wanted to headline Wembley Stadium. It must have sounded a bit naïve but we still kind of share the same vision. We’re a different band now in some ways, but we still push ourselves towards trying new things”.

With early comparisons to the likes of The Pixies and Smashing Pumpkins, Feeder immediately earned a reputation amongst fans and critics alike for their stunning live shows and went on to support the likes of Manic Street Preachers and Red Hot Chilli Peppers around the release of their second album, ‘Yesterday Went Too Soon’.    Later, single ‘Buck Rogers’ became their first big crossover hit, giving the band their debut Top 5 single and becoming an instant live favourite.    “It’s not like anything else we had ever done or really feel we need to do again but it is now part of our heritage,”  It just showed that I could write a pop song and  music’s about  freedom and escape.”

Even with everything looking up for Feeder, the worst was yet to come for the band, who were devastated in 2002 by Jon’s tragic, untimely death.   After agonising about their future, the band finally decided to carry on together, eventually joined by former Skunk Anansie drummer Mark Richardson.

“It was a really scary time and we didn’t know whether we should carry on. It was really hard and you never get over that,” Grant reflects. “But I think it’s made me more driven and Mark is definitely a part of Feeder now.”

Following their hugely successful singles collection of 2006, new album, ‘Silent Cry’, is perhaps Feeder’s most daring and complete album yet.   Startlingly intimate yet musically heavier than their more recent records, it reflects how far the band has come without compromising their roots, and works as a cohesive whole to convey exactly who the band are today.   “This is a really important album for us,” Grant says. “Any album now is important because it could be your last one, you just don’t know. I thought after ‘The Singles’, people would think we were calling it a day and I wasn’t sure about putting it out because of that, but I think what it did was make me realise what we’d done. It was always a dream to me to be in a band who made lots of albums, and it made me realise we were actually starting to achieve that and we can still make better music. I think that made us feel stronger as a band. We may not be the big new thing now, but I didn’t want to compromise or come back with a stale record and it doesn’t feel that way to me.”

Having previously worked with heavyweights like Gil Norton, Ken Nelson and Stephen Street, Grant himself took over production duties with engineer Matt Sime on this record after his initial batch of demos captured the sound the band had been hoping for and Feeder realised they  didn’t need to look any further for a producer.    “The others trusted my vision and I really respect them for that,” he explains. “I know we could have worked with other people, but it just happened that way. It’s a very organic record and we knew we had something good. Everyone felt it and it just worked . There was no great big plan. We just went in and made the record and that’s what I like about it. You can’t plan songwriting and music – it just happens and if it’s good, it’s good.”

Lyrically, ‘Silent Cry’ takes the band to a new level too.   While Feeder’s lyrics have always been intensely personal and inspired by real life happening to real people, Grant takes that a step further on this album, using the personal as a way to mirror the turbulent world around him, without ever confronting issues aggressively or forcing the record to turn into a political statement.

“I didn’t want to feel like I was trying to preach to anybody but I have touched on issues a bit more on this,” he explains. “I’m just saying this is my view of how I feel and what’s happened to us and the people around me. It’s observational I suppose. Maybe that’s from being a parent. I’m not trying to be boring but that does make me feel differently about things and there’s definitely been a lot happening in the world since I started writing this record. I think that’s affected me a little bit, though it’s still not a political album.”

From the arresting call to arms that is opener ‘We Are The People’ to the stirring, brooding ‘Heads Held High’, ‘Silent Cry’ is all the more powerful for its subtlety, for its refusal to make sweeping statements or obvious assertions. Its focus remains on the personal and private, on how the wider world impacts Grant’s – or indeed our own – life.   ‘Miss You’  is one such song that interweaves an individual life with the wider world, written after Grant simply read the newspaper one day.   “I suppose it’s like an urban love song about a relationship that’s gone really stale,” he says.   “There was a lot of stuff around in the news at the time  about the youth of today, knife crime etc , so it was inspired about someone who lived in that environment who’s going through that trauma, but is also aware of what’s happening outside. But everyone’s dealt with loss in some ways and so I’ve put my own experience in there too, even though I don’t live in that situation. It’s quite an angry song, but it is a love song too and I wanted to it to have a real youthfulness and energy to it.”

Such songs are interspersed by crucial blink-and-you-miss-them interludes that shape and direct the album, as well as the occasional classic Feeder pop song – like ‘Tracing Lines’ – that ease the pressure and move the record onwards.    “That’s still a rock song, but it was important to me to have a couple of poppier tracks on the album” Grant remembers.   “There were already quite a lot of anthemic tracks on there and an album needs to reflect the fact that every day is different in your life.   Every day isn’t a great big grand event.   That would be too much to digest and it wouldn’t feel right.   Those songs are like little escapes to break it up. That’s also quite a big part of what we are as a band, with that slight turn towards pop here and there.”

All told, it’s undoubtedly an album that should make even more people sit up and take notice of a band who believe the best is yet to come for them. A brave step forward – yet still retaining the independent spirit and heavy guitars of their early days – ‘Silent Cry’  is the sound of a band who are constantly evolving and reflecting passing time while never forgetting exactly what first inspired them to come together all those years ago.    “We’ve always felt that we had more to achieve and, though I feel like every album is a new chapter in some way, I’m hoping this one can push us even further. I feel this album is a step towards that, and yet a step towards our roots in some ways too,” Grant says.   “I definitely believe we can achieve more and we really do believe in this record. You can never guess how it will be received when other people hear it, but all I know is that we’ve made a record we’re very proud of.”