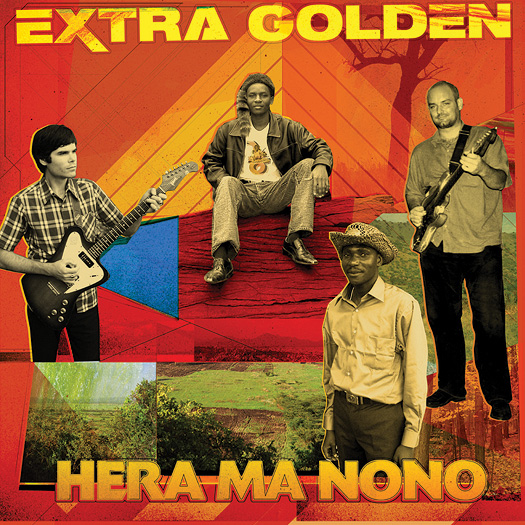 Hera Ma Nono is the exhilarating sophomore effort from Kenyan and American cooperative Extra Golden. Kenyan benga music and American rock first met with a friendly handshake on the group’s 2006 debut, Ok-Oyot System, and are now fully integrated in a union that represents the vanguard of both styles and transcends the very notion of authenticity.

The group’s future was uncertain after the unfortunate loss of singer/guitarist/co-founder Otieno Jagwasi in 2005. However, an invitation to perform at the 2006 Chicago World Music Festival presented an intriguing opportunity for a US concert debut and a chance to return to the studio. The group called on Opiyo Bilongo to fill the void, a singer/guitarist who has been a dangerous presence on the Kenyan Benga scene for over a decade. Guitarist Ian Eagleson had helped Bilongo record two albums with his group Bilongo Golden Stars back in 2004, sessions that are highlighted on Bilongo’s debut U.S. release, What Do People Want? on Kanyo Records. Onyango Wuod Omari, whose singular drumming punctuated Ok-Oyot

System, would also make the trip.

For several months and through almost interminable hassles, Eagleson and guitarist Alex Minoff worked feverishly with Onyango Jagwasi (brother of the late Otieno) to make Extra Golden’s concert debut a reality. After countless international phone calls, a great deal of hustling, and some help from people in high places (the office of Illinois Senator Barack Obama helped the group clear their final visa hurdles), Opiyo Bilongo and Onyango Wuod Omari got their visas just a few hours before their scheduled departure. This would be the first journey outside of East Africa for both benga stars.

Six weeks of memorable performances followed at both rock venues and private Kenyan functions, then Extra Golden retreated to an isolated location on Lake Wallenpaupack in the Pocono Mountains of Pennsylvania. As with Ok-OyotSystem, the band recorded using their “Nyathi Otenga Flying Studio,” but the session for Hera Ma Nono couldn’t have been more different. Instead of three hours in an open-air Nairobi nightclub, the group had five days in a private house. They had access to a variety of guitar amplifiers and effects, and perhaps the biggest difference was the drumkit. The set that Onyango used on Ok-Oyot System was, to be kind, broken. In Pennsylvania, he had a fully-functional kit with a large assortment of tom-toms. These new amenities helped to take the band’s sound in a new direction.

With the loss of Otieno Jagwasi, new voices have also contributed to Extra Golden’s new sound. Bilongo, revered in Kenya for his singing and composing, penned and sang lead on “Obama”, “I Miss You” and “Love Hijackers.” Onyango Wuod Omari, while still a sought-after session drummer in Nairobi, has moved into the role of lead vocalist, and can be heard on “Night Runners” and “Hera Ma Nono.” And while he didn’t make the trip this time, Onyango Jagwasi penned the lyrics and sang lead on album-opener “Jakolando,” a tribute to his brother that takes its title from a nickname shared by both. Hera Ma Nono also features some special guests. Austin-based Dennis Rathnaw played percussion on several tracks, and David Egan, a renowned songwriter from Lafayette, Lousiana, played the piano.

Hera Ma Nono is Luo for “love in vain”, a theme that reverberates throughout the album. While on “I Miss You”, “Love Hijackers” and the title track, it refers to the love that exists between two people, this same theme applies in less traditional ways in other songs. “Jakolando” and “Brothers Gone Away” illustrate the cruelty of prematurely losing family members and friends. “Street Parade” praises the citizens and culture of New Orleans, who despite a passionate allegiance to their home are punished by its harsh ecology. In a more upbeat lyrical turn, “Obama” thanks the Senator and others who helped Extra Golden reunite to make this recording. Such songs of praise are benga custom, and in keeping with that custom, Obama’s wife and mother receive thanks too. Finally, “Night Runners” contemplates the jajuok, the creepy, nocturnal creatures of Luo folklore.

Through it all, Hera Ma Nono shows that, while the defining element of Extra Golden may be its cross-cultural cooperation, styles like Rock and Benga are not quite as disparate as some may believe. Both arose from people cranking up electric guitars and singing melodic songs over propulsive rhythms in an attempt to entertain an audience. Though they may have to cross seas and petition governments just to play a few shows, the members of Extra Golden go about their work with a few simple goals in mind: to write songs that tell stories of life, love and loss; to praise people and places that are dear to their hearts; and, most of all, to create a sound that people of different backgrounds and generations can enjoy.